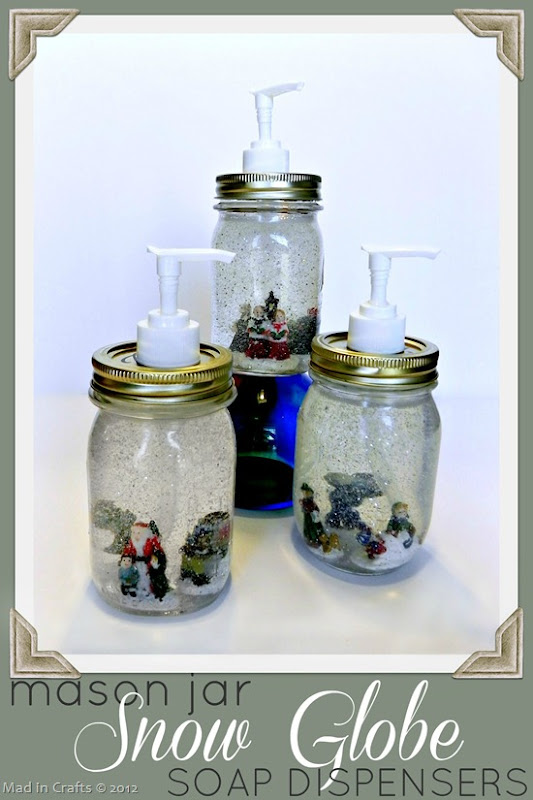 Maybe it’s not the height of creativity to take two already good ideas and combine them into yet another good idea, but I still think these are pretty creative.  I took two common mason jar crafts, the snow globe and the soap dispenser, and put them together to make… a Mason Jar Snow Globe Soap Dispenser!  Since they are made mostly from dollar store materials, you can craft a few of them for very little money.
To make Mason Jar Snow Globe Soap Dispensers, you will need:
mason jars with lids
clear liquid soap (in a container with a pump)*
Christmas village people*
super glue*
glitter*
tongs
funnel
hammer
Phillips screwdriver
*materials you can buy at the dollar store 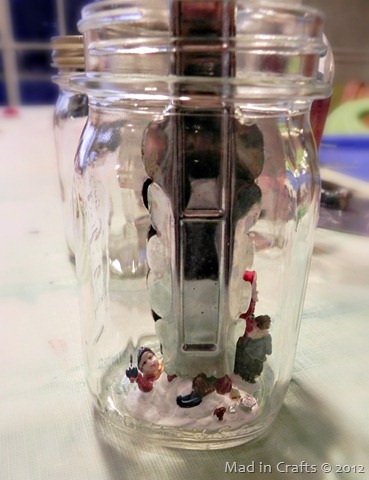 I love that picture. Doesn’t it look like I am squashing that poor child into the snow with my ginormous metal tongs?  Sorry ceramic boy.
Begin by gluing your Christmas village people (not to be confused with the Christmas Village People) to the bottom of a mason jar.  Usually you should use just a touch of super glue when you are making a project.  Not this time.  Glob as much of the stuff as you can onto the bottom of one of your little villagers.  Using your tongs,  place the villager in the mason jar, and press firmly again the glass at the bottom for a few seconds.
The first time I tried this project, I used a different glue.  Things did not end well.  But we won’t talk about that now.  Use super glue. 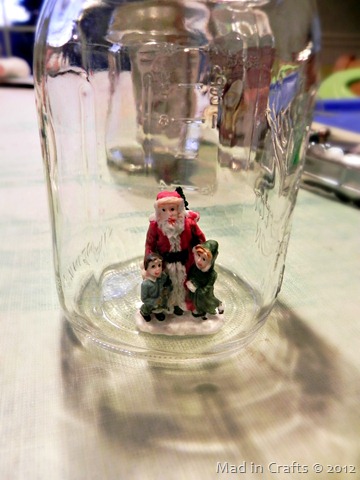 Place all your people where you would like them to go, and let the glue dry for an hour or two to be sure they will stick. 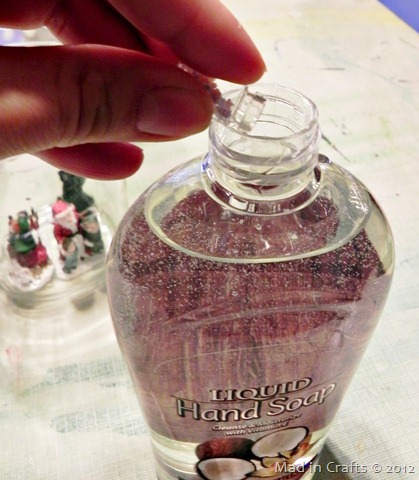 While you are waiting, you can prepare your soap.  I bought a few containers of clear liquid soap at the dollar store.  Something more Christmas-y scented would have been better, but all they had was coconut.  You could easily swap out the regular soap for hand sanitizer if that suits your gift recipient better.
Add a SMALL amount of glitter to the soap.  Don’t overdo this step.  If you add too much glitter, that’s all you will be able to see in your snow globe.
Give the soap a gentle stir with the soap pump.  You will get some air bubbles in the soap as you stir, but that is okay.  Just don’t close up the soap dispenser and shake it like a Polaroid picture, that will make your soap cloudy with bubbles.  Stirred, not shaken there, James Bond. 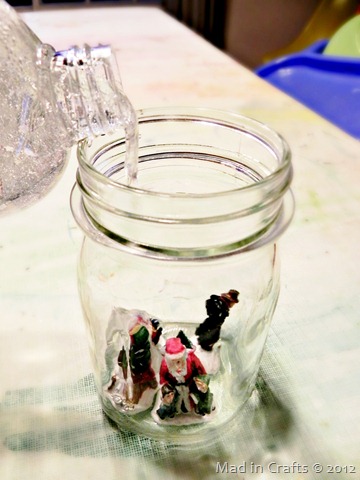 Add the the soap and glitter mixture to the mason jar, trying to avoid adding excess bubbles.  Any bubbles you add will eventually work their way to the top, but better not to have them in the first place.
Place the jar ring on a flat surface, and set the circle insert on top.  Using a hammer, CAREFULLY pound a Philips head screwdriver down through the middle of the metal circle to create a hole.  You might have to make a few holes next to each other to create an opening large enough to insert your soap dispenser pump.  If the pump fits snuggly, you are done with this step.  If it rattles around at all, secure it with super glue. 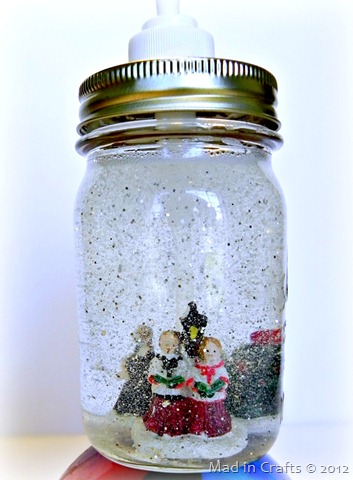 Re-assemble the mason jar and you have a delightful snow globe soap dispenser! 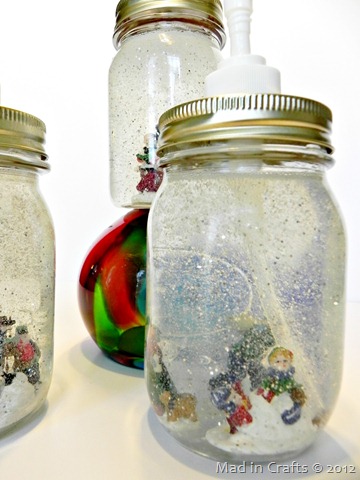 The soap dispenser functions just like any other soap pump (although every once in a while users might end up with a small amount of glitter on their hands – not often though).  The glitter will eventually settle in the soap, but it takes quite a long time.  When it happens, just give the jar a gentle swirl which should get the glittery snow flying again! 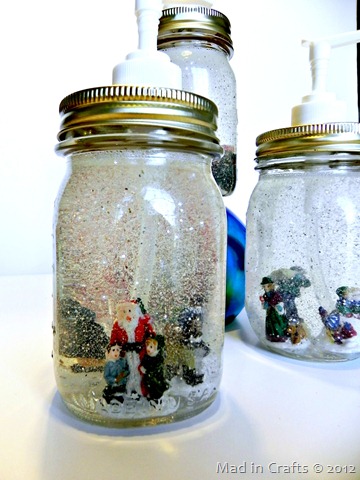 These would make lovely hostess gifts or presents for teachers, neighbors, or co-workers.  Everyone uses soap, right?  And, if they don’t, maybe this is a gentle reminder that they should.  😛
I made these soap dispensers with a decidedly Christmas theme, but you could adapt this project for other seasons very easily.  Swap out the Christmas villagers with small toys or other water-proof knick knacks and you could have fancy soap for a child’s bathroom or for any holiday of the year!
EDIT:  This method does work to create the soap dispenser, but eventually the insert of the mason jar lid will begin to rust as it is exposed to the liquid.  If you would like to avoid this, you can buy mason jar soap dispenser inserts (affiliate link) which make this project even easier! 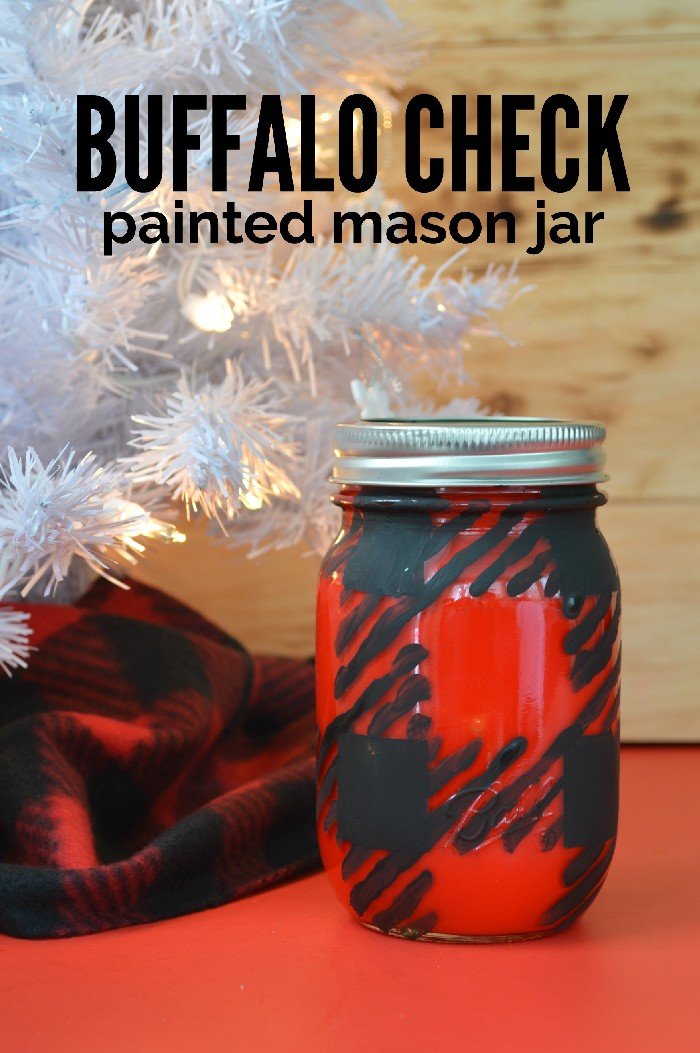 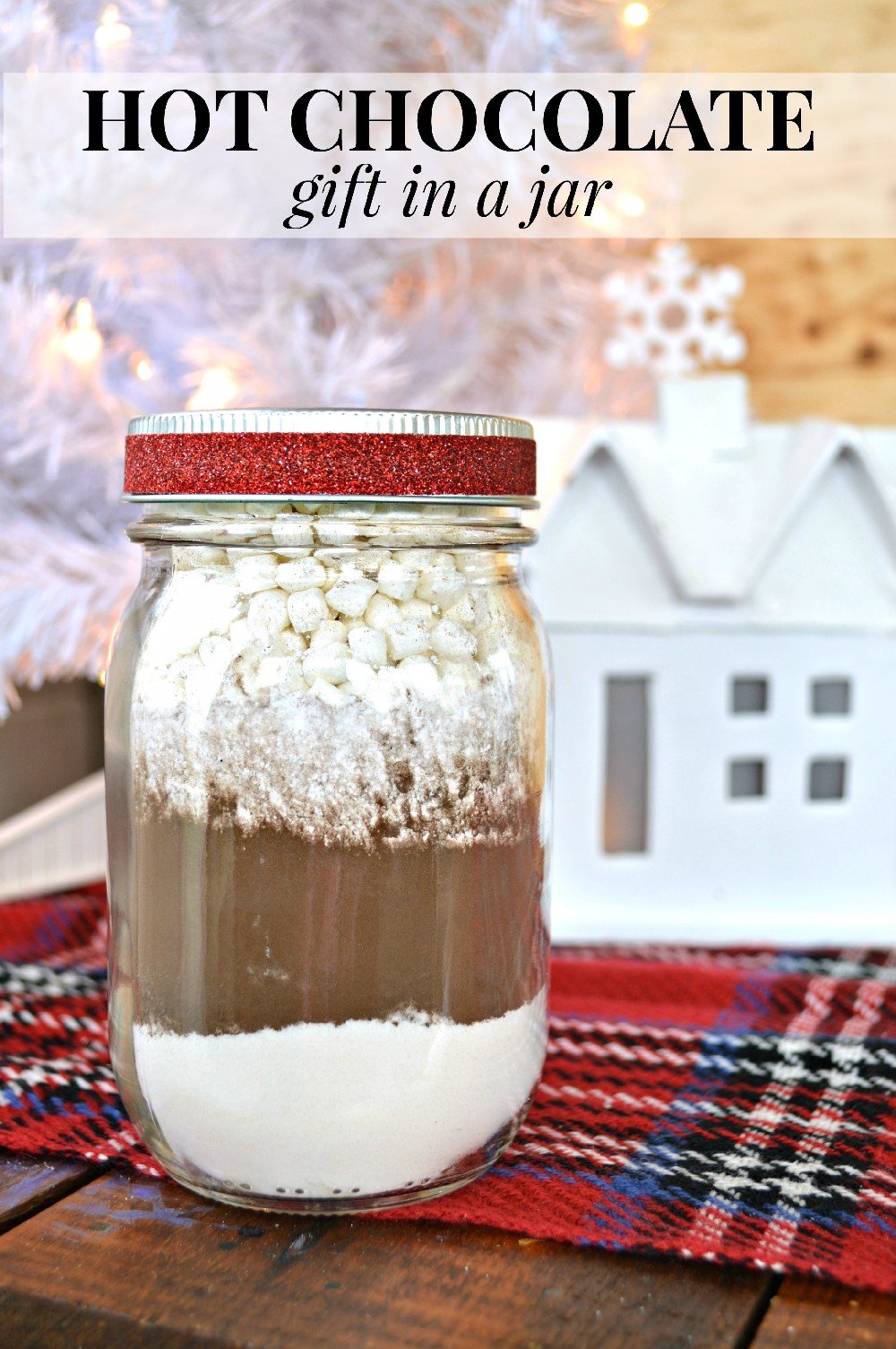 HOT CHOCOLATE GIFT IN A JAR