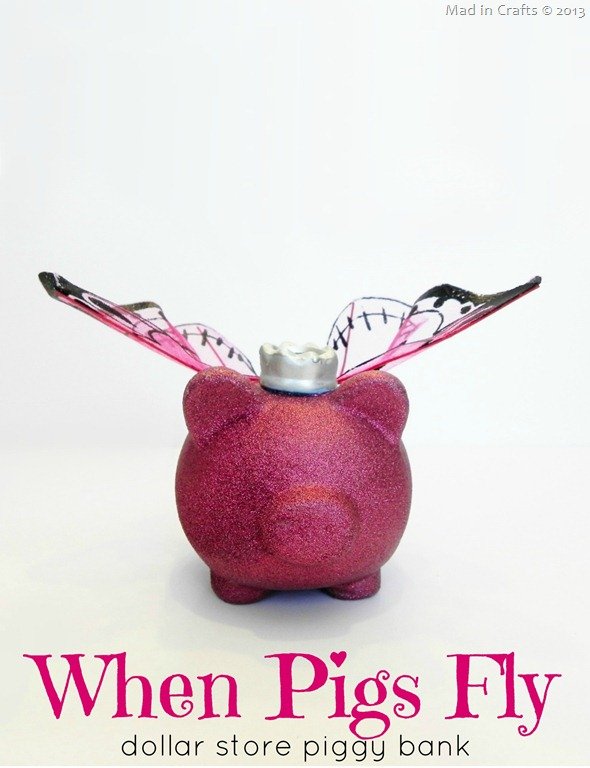 My daughter was starting to wonder why my son had a cool piggy bank that matched his Space Geek Bedroom and she didn’t have anywhere to put her “monies,” so I decided to craft one up for her too.  Dollar store piggy banks are perfect for decorating (because they are cheap and ugly).  I found one for her and decorated it to fit in perfectly with her Fairy Garden Bedroom.

Even if you don’t need to match a piggy bank to a pink and green bedroom, I think this could be a fun bank to have in your home.  Use it to save up for something you would normally only be able to afford “when pigs fly”: a new vehicle, an expensive pair of shoes, or a big vacation.
To make a When Pigs Fly piggy bank, you will need:
Some of these links are affiliate links, and I will be compensated if you choose to make a purchase after clicking through.
dollar store piggy bank
painter’s tape
Krylon Glitter Blast
dollar store butterfly
adhesive dots 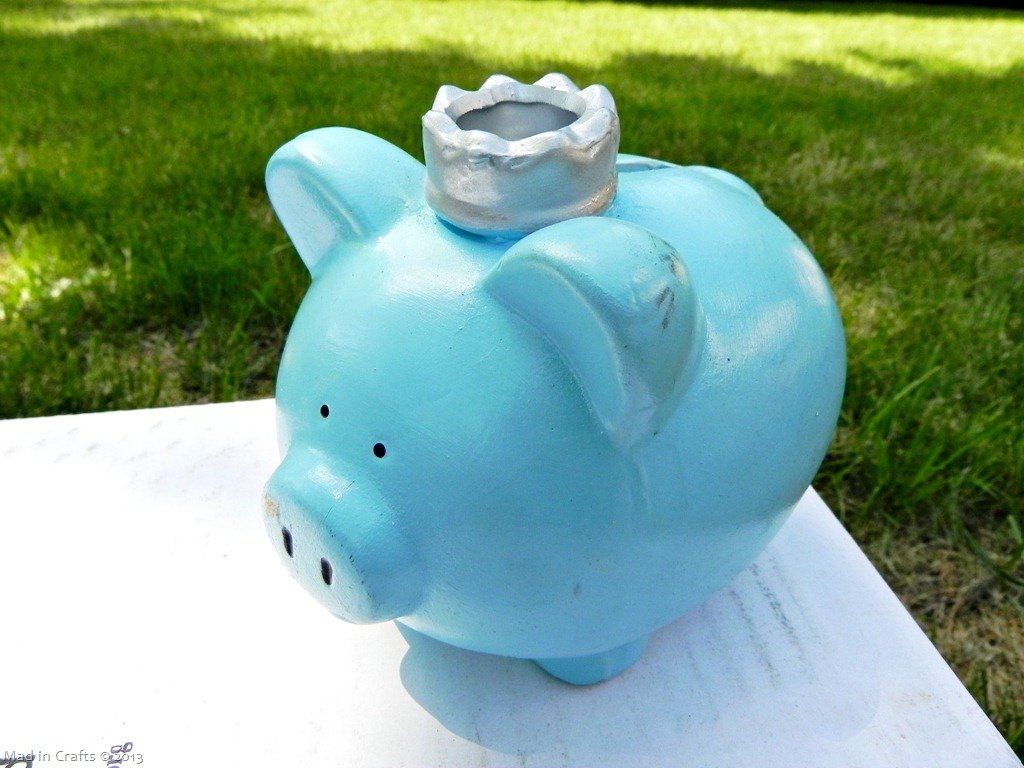 The banks that the dollar store typically carries are plain, no-frills pigs, so I was excited to find this “royal” piggy last fall.  The blue wasn’t going to work in my daughter’s girly bedroom, which gave me a chance to get my glitter on.  (I have been embracing the glitter and bling lately.  Have you noticed?) 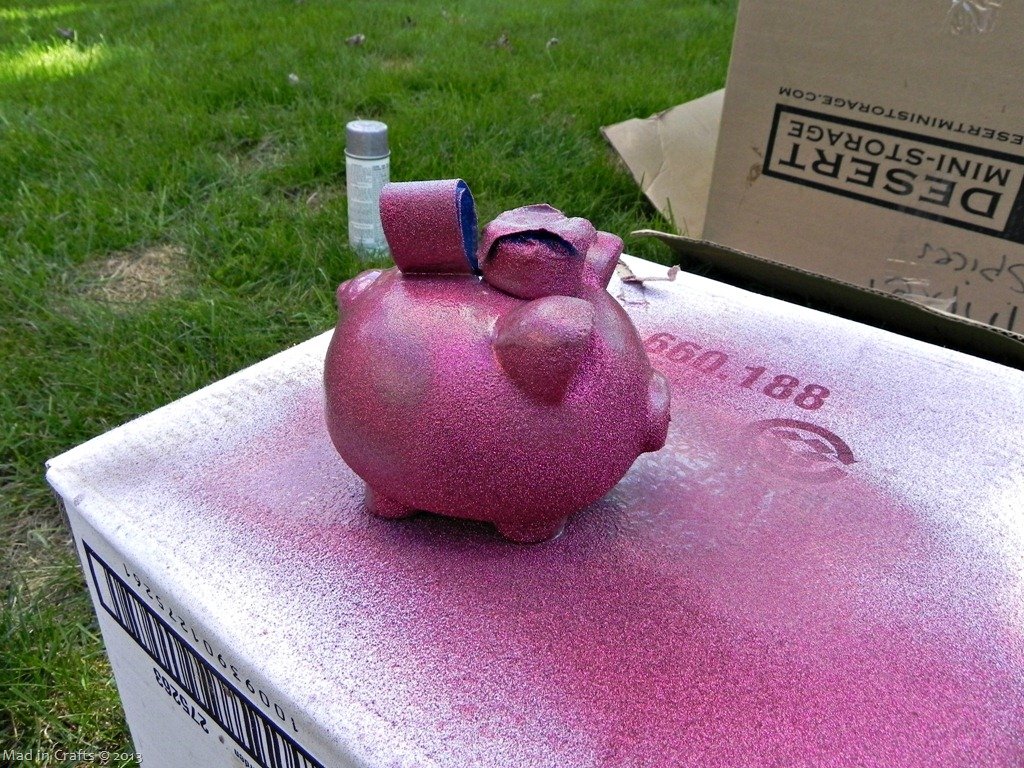 I used dollar store painter’s tape  to cover the silver crown and to block off the coin slot.  Then I gave the piggy a few blasts of Krylon Glitter Blast in Posh Pink.  This is some concentrated glitter, you guys.  After it dried, the piggy had the same shimmer as if I had used loose glitter, but none of it rubs off!  I used the Silver Flash Glitter Blast for my craft room cork board too. 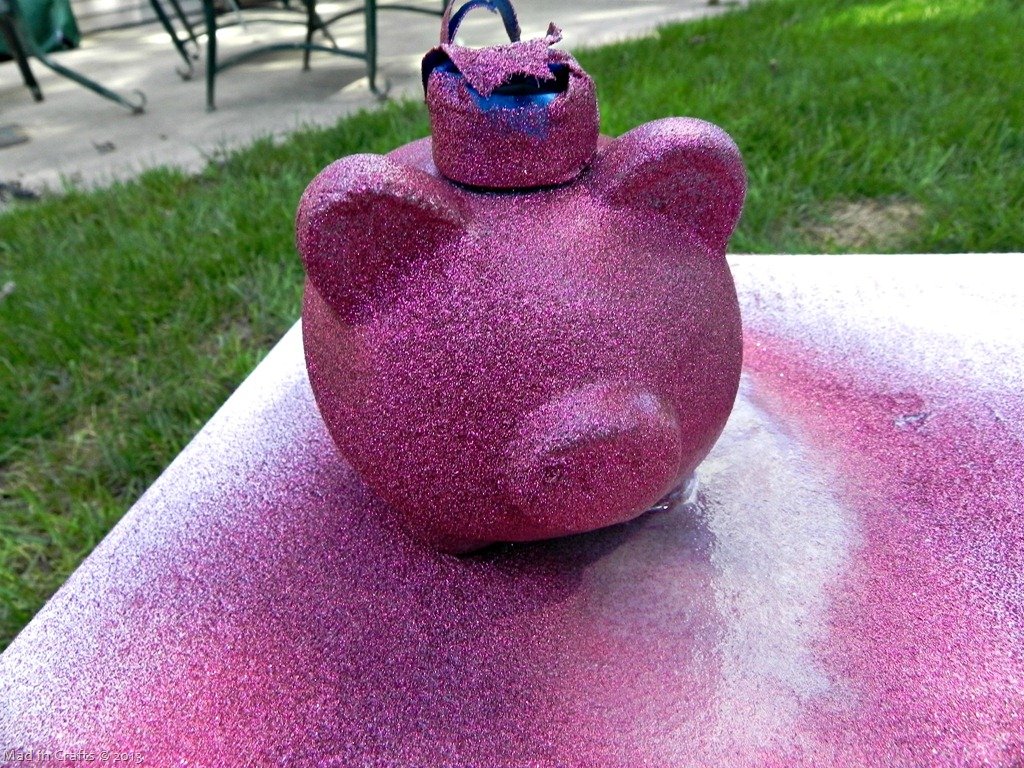 While I LOVE the finish that the Glitter Blast gives, this particular can jammed after a few minutes of use… AND WOULD NOT STOP SPRAYING.  I was very thankful I was spraying outdoors because there was a section of lawn that ended up looking very fabulous after the can emptied itself.  I have heard of other people having similar problems with the Glitter Blast, so don’t feel alone if it happens to you. 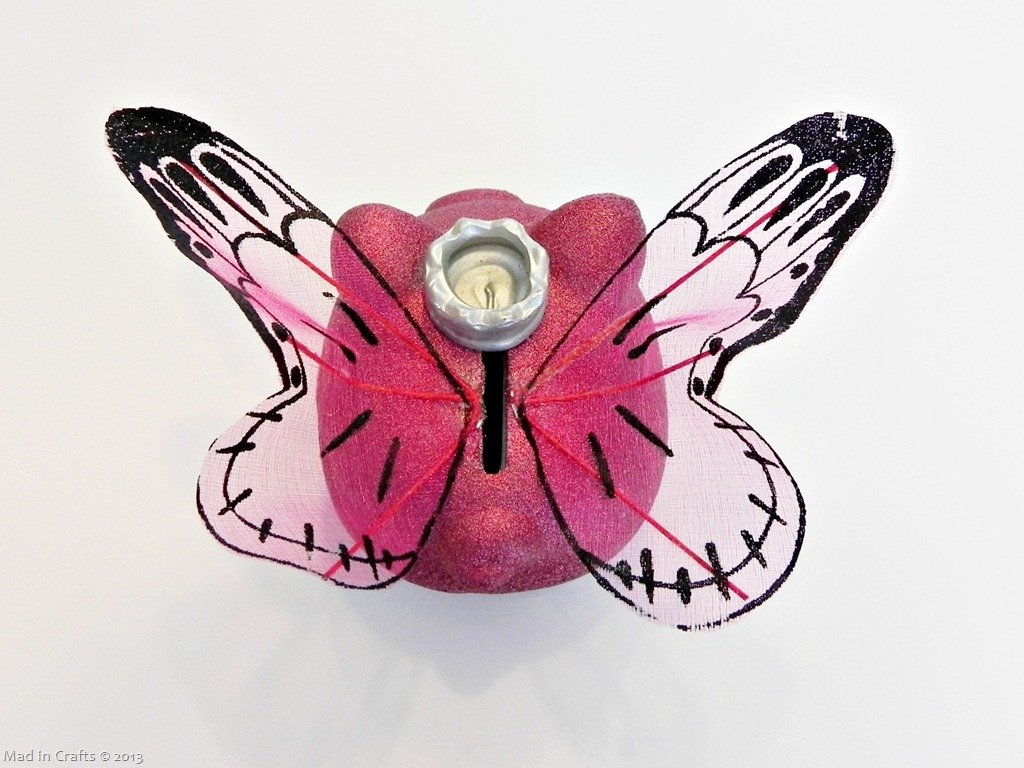 This time of year, Dollar Tree carries decorative butterflies near their floral section.  I ripped the wings off of the body of the butterfly and attached them to the piggy bank with adhesive dots.  The wings are built around wires which can be positioned to make the wings look extra pretty. 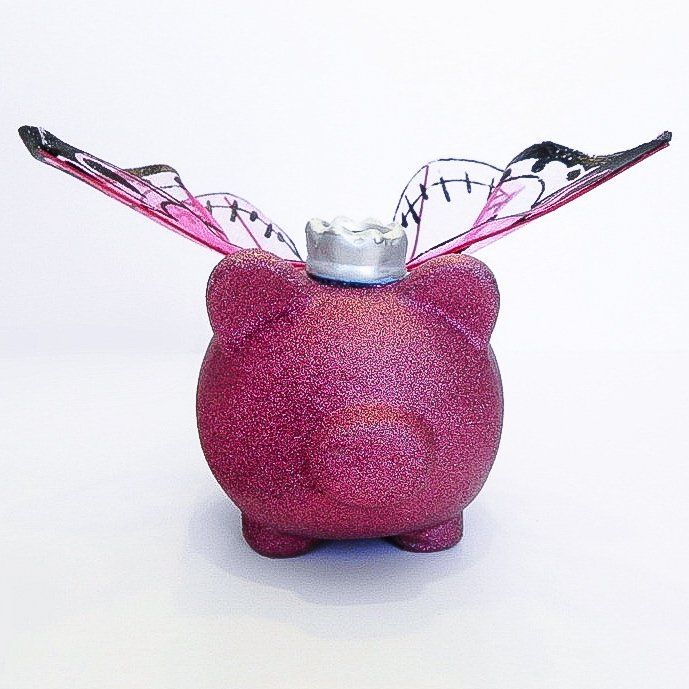 If there were a piggy bank that was also queen of the fairies, I am confident that this is exactly what she would look like. 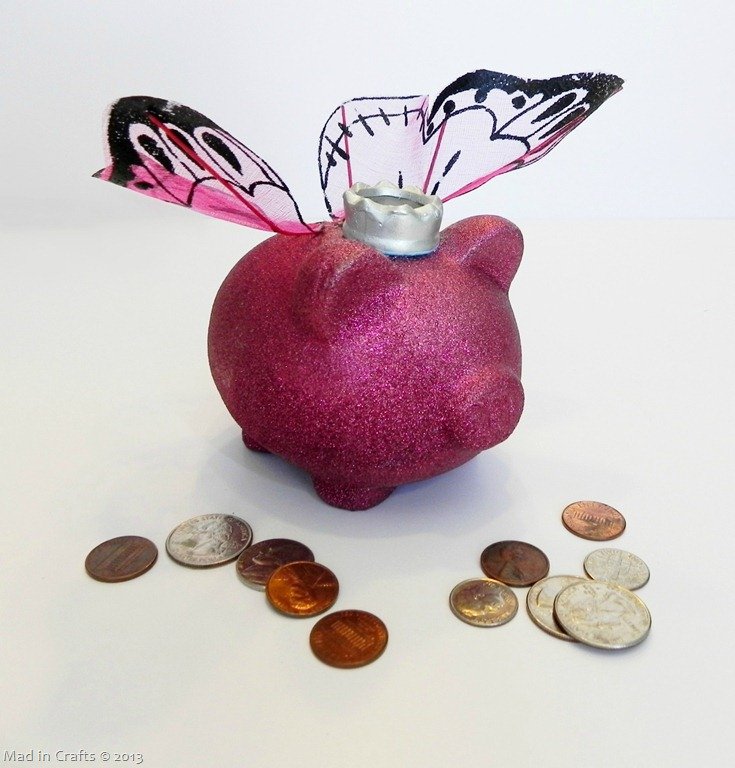 Whenever my daughter finds spare change lying around the house, she quickly runs to her room to deposit it in her pretty piggy bank.  I like that it is teaching her to be excited about saving when it’s so easy to be excited about spending. Speaking of which, what would you buy when pigs fly? 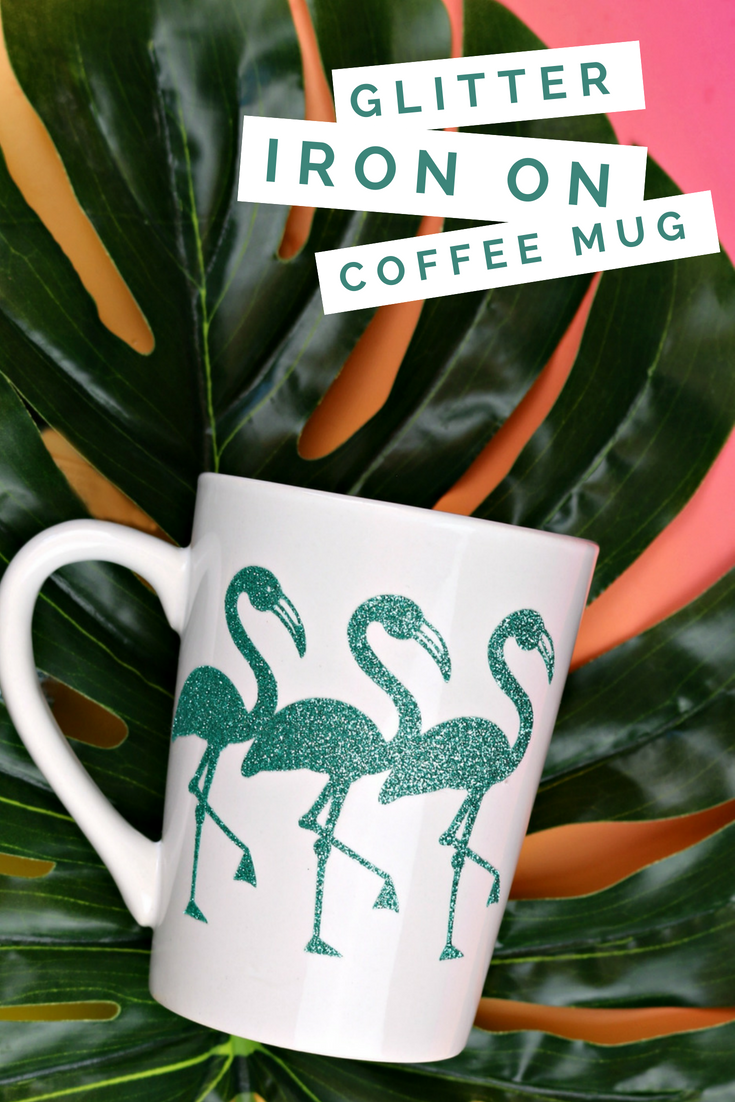 GLITTER IRON-ON VINYL ON A MUG 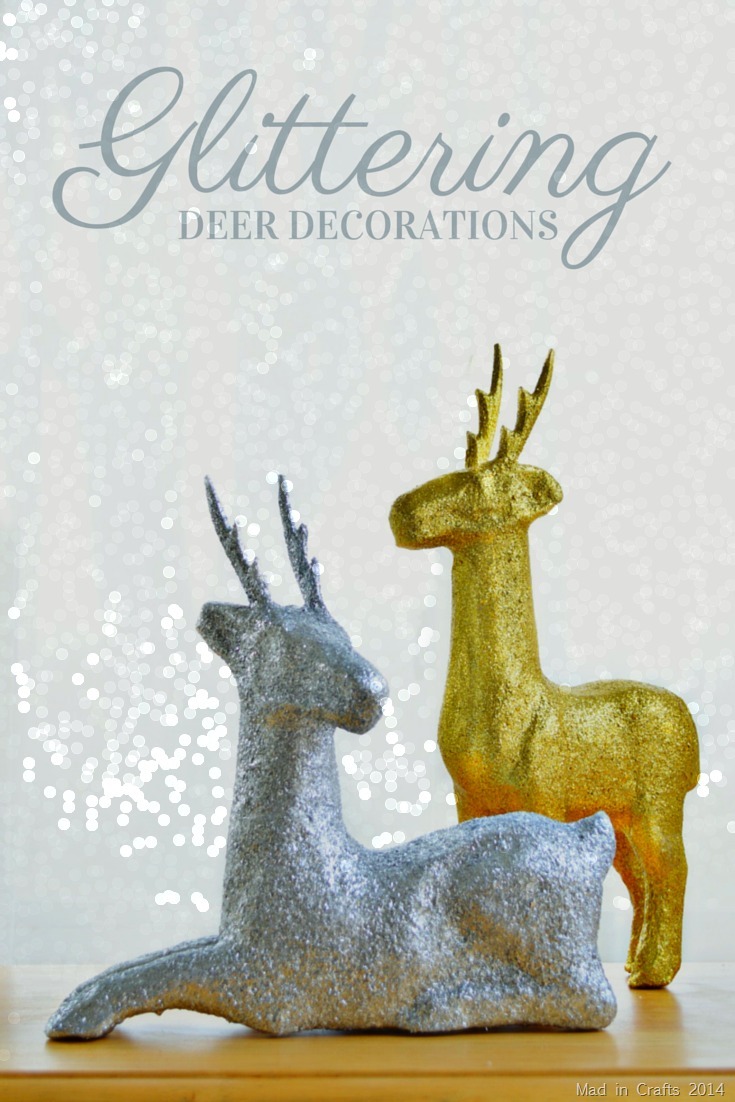