You are here: Home / Recipes / Dessert / V-Day Sweet: Schwarzwalder Kirschtorte
I spent the summer between my junior and senior years of high school in Europe.  With 4 of my classmates.  And I got paid to do it.  It was a very difficult period in my life.
The trip was part of a school program, and it took place back when the economy was flush and people didn’t know what to do with all the money that was just lying around.  “Why don’t we send some kids to Germany?” “Sure, just throw some Deustche Marks at them.”  Yes,  this was pre-Euro, people.  I am that old.
Since my 17th birthday would take place while we were in Germany, my mom secretly sent some money along with our college-aged chaperone to trot down to the local Backerei (aka the most wonderful place on earth) to buy me a Schwarzwalder Kirschtorte, known to Americans as Black Forest Cake.
If the cake is made to a traditional recipe, it’s definitely an adult dessert as the whole thing is dosed pretty heavily with kirsch, a German cherry brandy.  My 17th birthday cake had kirsch-drenched cake, kirsch-laden filling, whipped cream with a touch of kirsch, and each piece had its own secret hidden cherry encased in, you guessed it, kirsch.  Since we were a group of 16- and 17-year-old lightweights, by the time half of the cake was gone, we were giggling uncontrolably and had decided that “kirsch” was absolutely the funniest word in the history of words.
While I am on a tangent:  When the chaperone went to order the cake from the Backerei, he had to do all the ordering in German.  The baker asked him for a name.  Excited that the bakery would be putting my name on the cake, he very carefully spelled out (in Deutsch pronunciation) J-E-S-S-I-C-A.  Even though the baker gave him a very strange look, the chaperone walked back to campus proud of his successful German transaction.  It wasn’t until he picked up the cake and noticed that my name was not piped on the top of it that he realized that the baker had been asking him for HIS name.
My cousin Mollie was chosen to go on the same school trip a few years after I was, so we have always had a fondness for all things Deutsch (all non-Nazi things, that is).  My husband was gracious enough to share me on Valentine’s Day, and Mollie and I are going to make a German feast in celebration of her recent birthday.  We are making rouladen, spaetzle, and kraut.  To surprise her, I made her a Schwarzwalder Kirschtorte for dessert.

And this is how I did it. 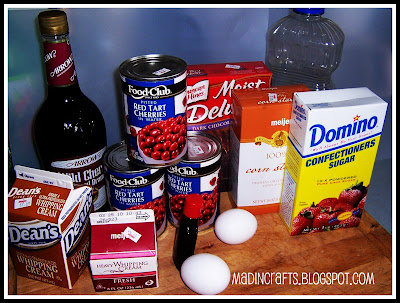 To make this short-cut version of Black Forest Cake, you need: 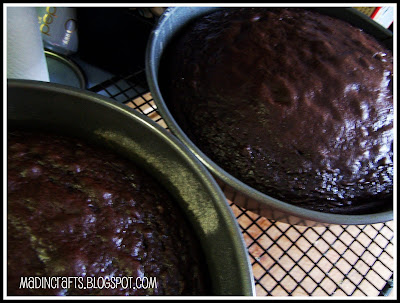 First, make the cake mix according to the directions on the box.  Pour the batter into 2 9-inch rounds.  Bake as directed.  Cool and remove from pans. 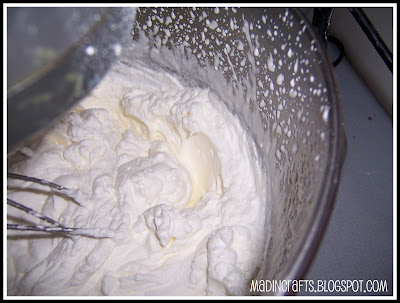 In a chilled bowl, whip 3 cups heavy cream with 1/3 cup powdered sugar and a few tablespoons of kirsch.  Don’t immediately switch your mixer on high!  Heavy cream everywhere!  Gradually work your way up from low to high, stopping when stiff peaks form.  You should feel free to sing some Devo while you are going this. 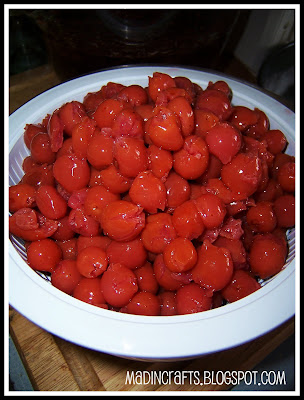 Drain your cherries over a bowl.  BTW, if anyone tells you that you can make Black Forest Cake with cherry pie filling, cross them off your Christmas card list because they are not your friend.  This is one substitution that is not allowed, if for no other reason than it is so easy to walk one aisle over in the supermarket and get the canned tart cherries instead. 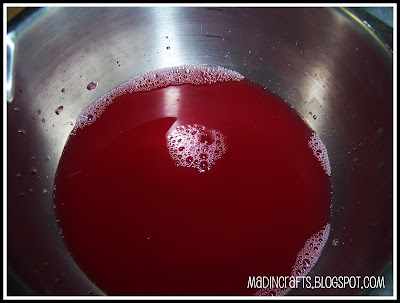 Save the cherry juice for later. 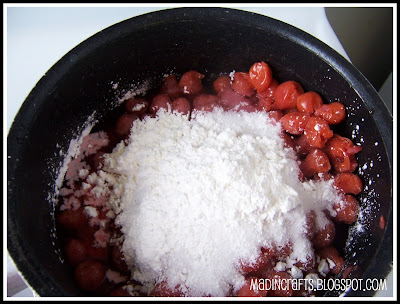 Combine your cherries, 1/4 cup cherry juice, and 1/4 cup kirsch in a saucepan with 1 cup of sugar and 1/4 cup of cornstarch.  Heat over medium heat until it bubbles and gets happy. 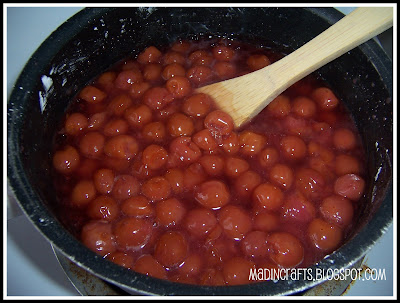 See, bubbly and happy.  Remove from heat and let it cool COMPLETELY.
Using a bread knife and a steady hand (which I do not have), cut each of your two cake rounds in half.  Place one cake half down on your serving plate 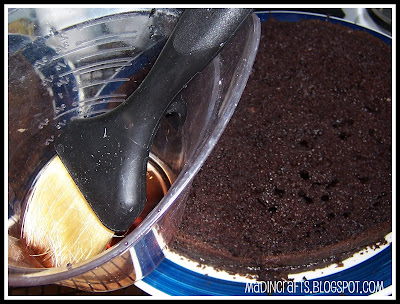 Using a pastry brush (or grilling brush in my case 😛 ), moisten (hate that word) the top of the cake with more kirsch.  See I warned you it was an adult dessert. 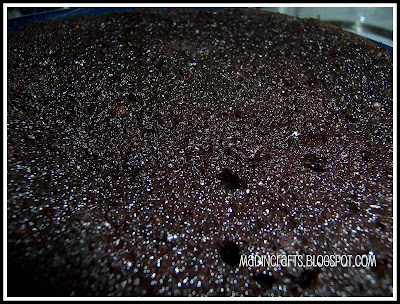 Look how good it looks already.
EVERYBODY,  COME AND SEE HOW GOOD I LOOK! 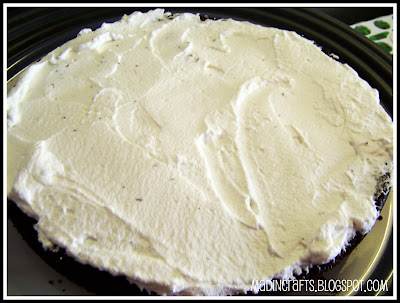 Spread a layer of whipped cream on the cake.  See those crumbs that made their way into the cream?  We don’t care about them.  Forget them entirely. 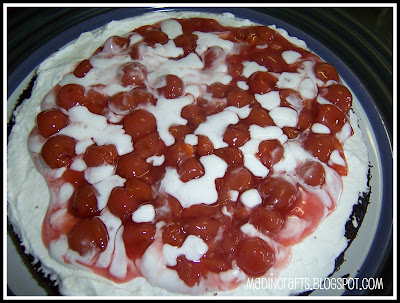 Plop some of the cooked cherry mixture on top of the whipped cream.  This is what it will look like if you don’t make sure it has totally cooled off first.   Whoops. 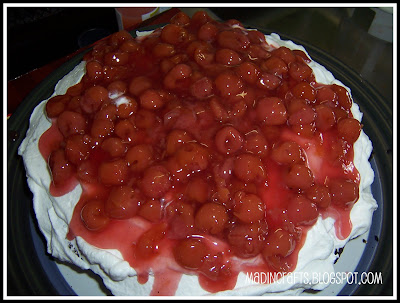 Put on another layer of cake, more booze, more whipped cream, more cherries.  This is what it looks like when the cherry mixture has actually cooled.
Top with a third layer of cake.  What happens to the fourth cake half, you ask? 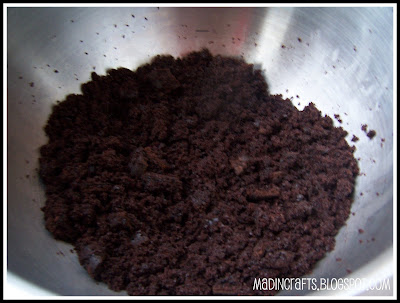 This does.  Crumble the last cake half in a bowl.  This is a great job for any little helpers in the house. 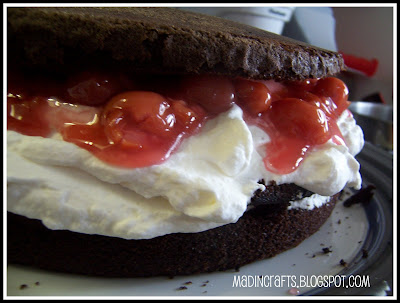 Here’s where we are so far.  Yes, it looks like a mess.  But a mess you would totally eat, right?
Frost the cake with the remaining whipped cream.  Pat the crumbled cake onto the sides of the frosting.  Pipe an edge of whipped cream around the top of the cake and fill the middle with whatever cherries you have left.
Disclaimer:  Anyone of you who feel inclined to laugh at the next picture, just remember – IT’S THE THOUGHT THAT COUNTS! 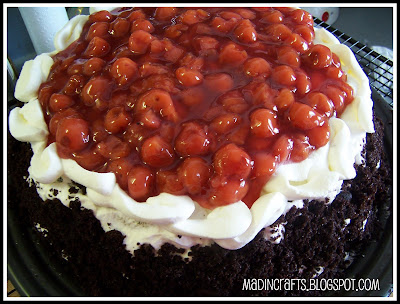 So it’s not the prettiest cake ever, but what it lacks in aesthetic appeal, it makes up for in ginormousness.  This sucker is huge.  And there are only going to be three of us eating it.
I sense some “Isn’t kirsch the funniest word ever?” moments in my future.
EDIT:  Whoops! I realized that I never gave you guys the actual recipe.  Duh.  Here it is:
Schwarzwalder Kirschtorte
One chocolate cake mix, baked in two layers
Two (20-ounce) cans pitted sour cherries, drained
1/2-cup reserved cherry juice
1/2-cup cherry brandy
1-cup white sugar
1/4-cup cornstarch
1-tsp vanilla extract
3-cups heavy whipping cream
1/3-cup confectioners’ sugar
2 T. cherry brandy
Mix cake mix and bake in two 9-inch layer pans. Turn onto racks and allow to cool.
Drain cherries, saving syrup. Mix 1/4-cup of syrup with 1/4-cup cherry brandy.  Combine syrup mixture with cherries, white sugar and cornstarch in saucepan. Cook over low heat until mixture boils and thickens, stirring constantly. Remove from heat and stir in vanilla. Cool before using.
Combine whipping cream and confectioners sugar in chilled bowl. Add 2-tbsp cherry brandy, if desired. Beat at high speed to stiff peaks.
Combine 1/4-cup cherry syrup with 1/4-cup cherry brandy or just use 1/2 cup cherry syrup.
Split each cake layer in half horizontally. Set bottom layer on cake plate. Use pastry brush to moisten layer with 1/3 of cherry syrupand brandy mixture. Frost with one cup whipped cream. Spread with 3/4-cup cherry filling. Top with 2nd cake layer and repeat syrup, cream and filling. Top with 3rd layer and repeat. Crumble 4th cake layer into fine crumbs and reserve.
Frost sides of cake with whipped cream. Use rest of whipped cream and cherry filling to decorate, then place balance of filling in circle at the center top of the cake. Decorate sides of cake with thick coating of crumbled cake crumbs.