You are here: Home / Before & After / TARDIS Closet 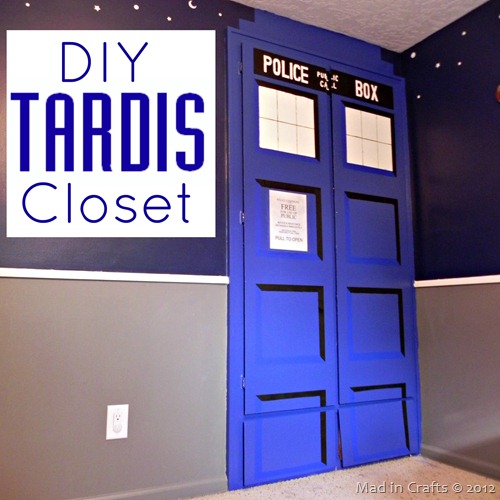 The icing on the top of the cake that is my son’s Space Geek Bedroom is the spectacular TARDIS closet.  I am not at all humble about this project because I *LOVE* the way it turned out.
I am not the world’s foremost expert on Doctor Who, having only made it through 3 or 4 seasons myself (there are 32 total, plus various specials), but my son and my husband have gotten through several more via Netflix.  When my son was 2, he would ask for more episodes each night by shouting, “Doctah Ooo!  Doctah Ooo!”
Perhaps that’s why, when I saw the built-ins in his new bedroom, I saw THIS instead of a closet: 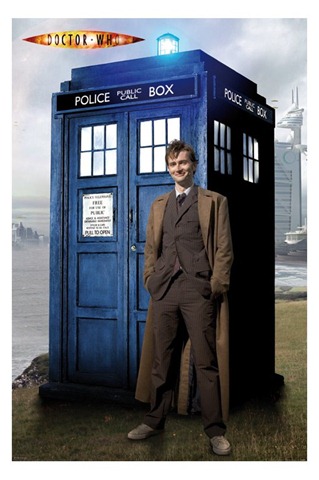 For those of you who have never seen Doctor Who, here is a quick primer on the TARDIS courtesy of Wikipedia.

“The TARDIS (Time and Relative Dimension in Space)is a time machine and spacecraft in the British science fiction television programme Doctor Who and its associated spin-offs.  A TARDIS is a product of the advanced technology of the Time Lords, an extraterrestrial civilization to which the programme’s central character, the Doctor, belongs. A properly maintained and piloted TARDIS can transport its occupants to any point in time and any place in the universe.”

“Apart from the ability to travel in space and time (and, on occasion, to other dimensions), the most remarkable characteristic of a TARDIS is that its interior is much larger than it appears from the outside.”

And also it looks like a British police box. 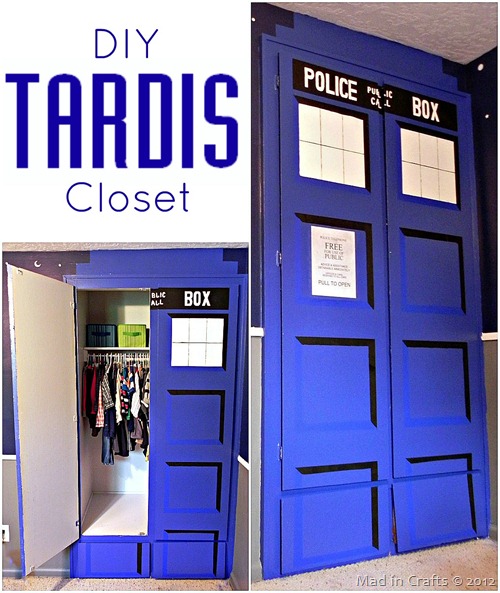 If that wasn’t enough confusing nerdiness to scare you away, you are probably up to making it through the rest of this post.  Here’s how I turned a boring built-in into the TARDIS! 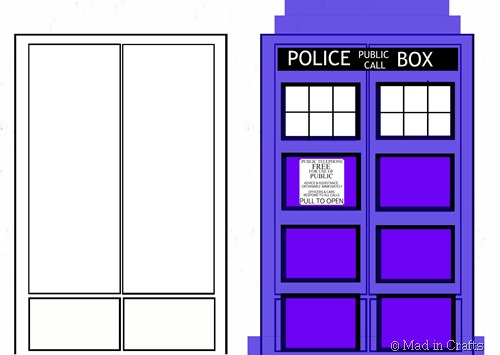 I first made a rough mockup of my son’s closet using PicMonkey and then added the TARDIS design to the drawing to see if I could actually make the whole thing work.  Since my drawing wasn’t to scale, my finished product is slightly different than this sketch.  It was useful to have an idea of what I was doing before I started, however. 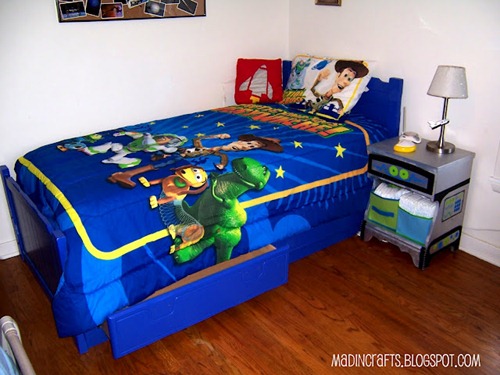 The first step was to paint the closet in a lovely TARDIS blue.  I had quite a bit of paint left over from painting my son’s big boy bed two summers ago.  Fortunately with a few stirs, it was in good enough shape to use for the closet too.
After the paint dried and I had reinstalled the closet doors, I sat down to figure out the proportions of the TARDIS doors.  Since I am terrible at math, most of my measurements were approximations, so our closet TARDIS might not be an exact scale replica of the real TARDIS.
I marked off the the outer lines of the phone booth’s windows and recessed panels using painter’s tape and a level.  I marked off what would become the “Police Box” sign the same way. 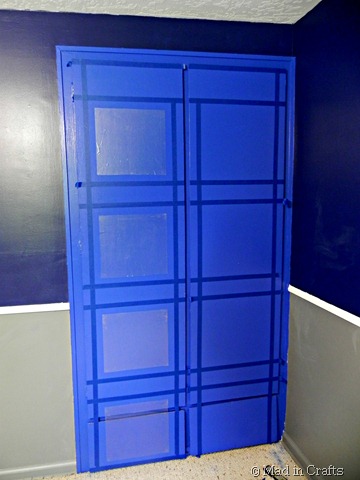 I didn’t want to have to waste a ton of painter’s tape to mask off the interior of each of the eight panels, so I came up with a new strategy: using dollar store contact paper! I measured the size that each panel should be, cut four squares out of contact paper and stuck them on the doors. 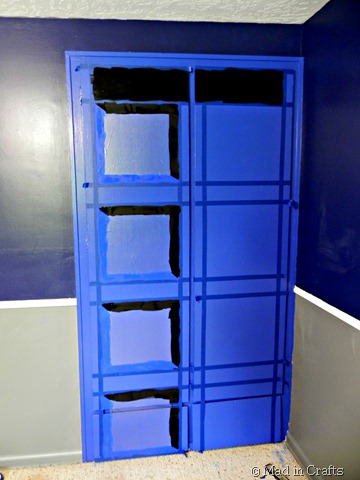 The contact paper masked off the paint AND I could reuse the four pieces on the opposite closet door. 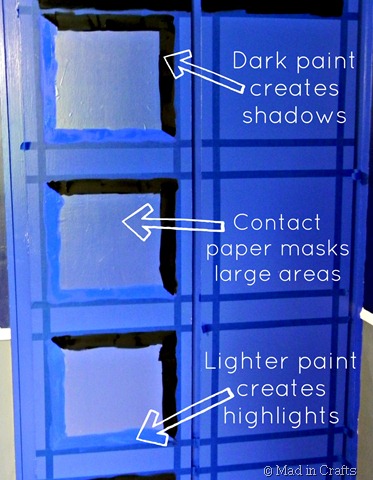 I made use of an old set-painting trick to give the recessed door panels a 3D look.  By painting the bottom and left frame of the panels slightly lighter than the main blue color and the top and right sides black, your eye is tricked into thinking the rectangle in the middle is set farther back.  If you ever look at a door that really does have recessed panels, you will notice the light and shadows really do cause lighter and darker areas. 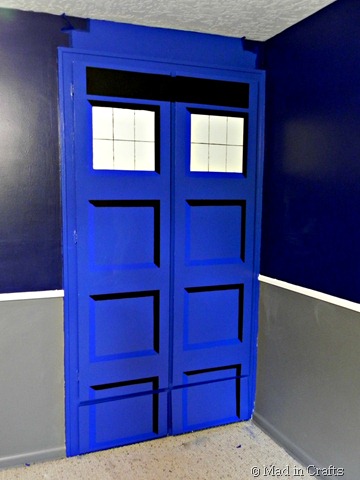 When the tape and contact paper are removed, you can see that those panels really look recessed.  I used the same shadowing technique around the two sets of windows too. 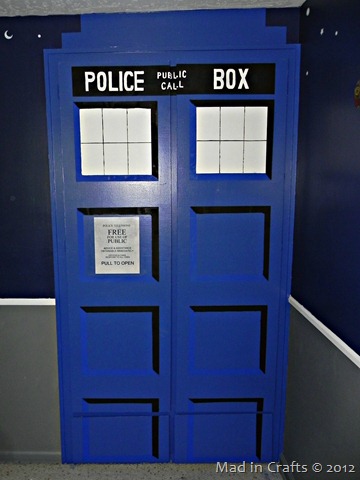 I sketched the lettering for the POLICE BOX sign at the top in pencil, and then painted the letters over my sketch.  The PUBLIC CALL letters in the middle took a bit more work, since part of the letters had to be painted on the doors of the closet and other parts on the closet itself.  With a little trial and error, I got the letters to line up pretty well.
TIP:  The lighter blue, white, and black paints I used were just acrylic craft paints I bought at Dollar Tree a year or two ago.
I typed up the “FREE for use of PUBLIC” sign and my mom printed it off.  I Mod Podged it into place using matte Mod Podge.  It might not stand up to years of wear and tear from a little boy, but it will be easy to replace if need be.
With those fairly simple steps, I turned a plain, built-in closet into a magnificent nerdy focal point for my son’s room.  He might grow out of it down the line, in which case it will be a simple job to prime and paint over it.
But, really, who can outgrow a Timelord’s spaceship? 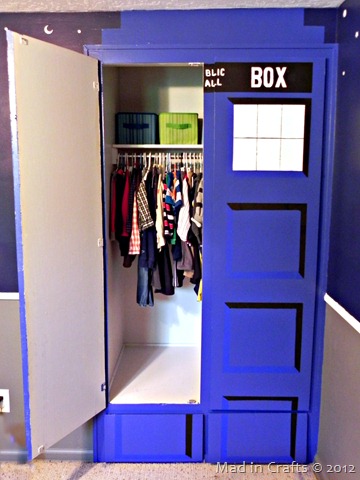 And, since you were all wondering, OF COURSE it’s bigger on the inside!

Click over to see the rest of his Super Space Geek Bedroom.  Then come back tomorrow for more geeky goodness!