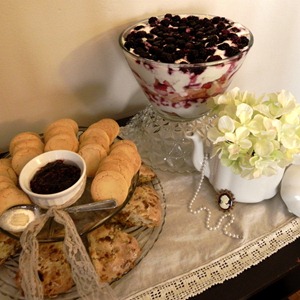 I invited a few of my girlfriends over to watch the Royal Wedding last week, because it was an excellent excuse to eat some tasty treats and laugh at silly hats.  I have been having trouble keeping myself from talking with a British accent ever since.

The simple tea time menu combined with a few decorative objects I had around the house made for a fun grown-up girls’ tea party.

These same recipes and ideas would work well for Mothers’ Day or a wedding shower.  It would also make a lovely book club party, especially if you were reading Austen! 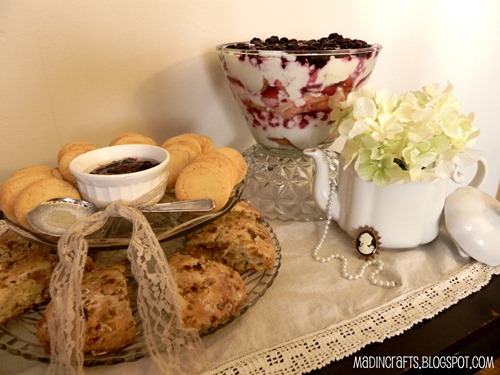 I will post a tutorial on making the English Toffee Scones, seen on the bottom of the tiered tray, later in the week.

On the top of the tray are some store-bought shortbread biscuits (aka cookies) and raspberry jam.  That is a simple combination that I am going to use again.  Delicious!

I made up my Lemon Berry Trifle the night before so that the berries could get all juicy and melt right into the angel food cake.  So good.  I added a layer of blackberries this time which was a good idea, although the trifle almost didn’t fit in the bowl.

For table decoration, I shoved some silk hydrangeas into a white teapot and draped a fake pearl necklace over the spout.  If you are a Dollar Tree shopper, you might recognize that “brooch” as the cheapo hair tie they sell! 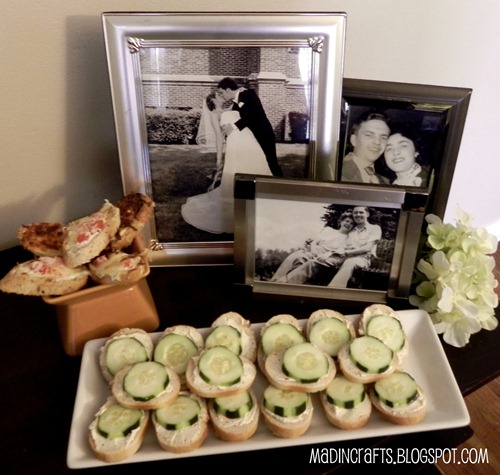 My friend Missy supplied the savory tea sandwiches.  Although bruschetta isn’t normally associated with English tea parties, it is so awesome that it should be eaten with every meal.

For these bruschetta, she cut a loaf of french bread into slices, and topped them with a mixture of cream cheese, garlic and spices, then fresh tomatoes and mozzarella.  Then she broiled them.

For the more traditional cucumber sandwiches, she topped small bread slices with a mixture of cream cheese and a packet of zesty Italian salad dressing mix.  Top each one with a slice of cucumber and there you go!

Were you one of the 2 billion people who watched the Royal Wedding?  What special treats did you eat while watching?