Angela asked:  I have a question! I am seeing bloggers use {} instead of () more and more. Maybe because they look “prettier?” It seems to me there may be some rule that’s being broken here, but I’m not for sure. Are folks just being stylistic, or are they breaking some essential punctuation rule? I’d be lying if I said it doesn’t annoy me.
Ah, only we true grammar sticklers get annoyed at the idea that a punctuation rule might possibly/maybe/sort of be being broken.  But we don’t get annoyed because we are cruel; we get annoyed because care so much.  We’re just big teddy bears inside, I promise.
I have seen bloggers take liberties with many different types of punctuation.  In fact, I think I could write a whole post on emoticons.  Most of the time, bloggers are exercising the creative license to reinvent punctuation as a graphic design element. In the case of actual graphics, like the Crafterminds and Nice Girl Notes graphics, I am cool with a little Extreme Makeover: Punctuation Edition.
However, my right eye starts to twitch when punctuation gets all “fancified” in actual writing.  Punctuation is meant to serve a real purpose, guiding the reader to the writer’s intended message, and that’s enough work for these little guys.
Today, while everyone is talking about their NCAA brackets (mine are a royal mess), let’s take a look at slightly more predictable brackets.
WHAT THE HECK ARE THOSE THINGS?
Falling under the broad category of brackets, these marks ( ), [ ], { } are meant to set off information from the rest of a sentence.  Fairly straightforward.  But, since the English language can’t seem to ever get its act together, people can’t decide what to call them!
According to an informal poll on a computer programmer site, the Brits have one set of names and we Americans have another.  Seems we are never going to get over that whole War of Independence thing.

In England:
In America:

WHEN DO WE USE THEM?
Parentheses ( ) are used to set off incidental information from the rest of a sentence, to enclose numbers or letters in a list, to enclose a date, or to cite information.

Brackets [ ] are used to set off information that is already in parentheses or to add an explanatory word in a quote.

Snuggies (made of fleece or microplush [a single-sided fabric]) are awesome.
“Don’t judge me for wearing [my Snuggie]; it’s freaking cold outside,”  Jessica rationalized.

But what about squiggly, curly, fancy pants braces?  As it turns out  { }  aren’t really punctuation marks at all.  WHHAAAAA?!?!
Grammar Girl explains:

[Curly braces are] on your keyboard because they have specialized uses in mathematics and science. For example, they are used to enclose the third level of nested equations when parentheses and brackets have already been used for the first two levels.

So, in answer to your question, Angela, those bloggers who are using the braces are misusing them.  BUT, they are misusing a mathematical symbol, not a punctuation mark.
And I don’t care so much about that. 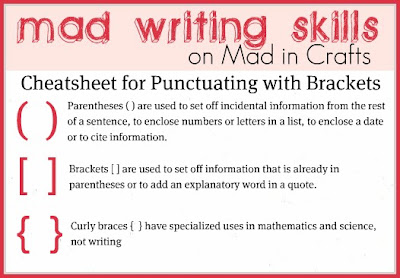 Pin It
Comment here or on my facebook page, tweet me or send me an email with any and all questions you have.  I will answer as best as I can, and, if I don’t know it myself, I will do the research for you!