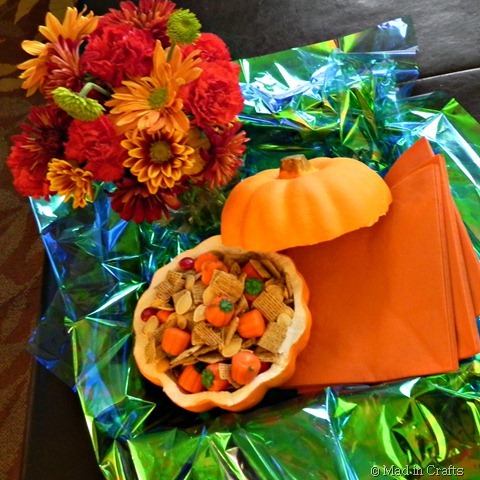 If you have been following my Pumpkin Party board on Pinterest, you will recognize a lot of the food ideas that made it to the party!  I am a nut for pumpkin foods, especially desserts, so I had a tough time editing that list down!
The snack mix that I served in the halved DT pumpkin was inspired by this mix from Just Make Stuff.  I didn’t use that recipe but took elements of it for this mix.  I used a bag of marshmallow pumpkin candies, a bag of fall colored M&Ms, about 3-4 cups of cinnamon Life cereal and the roasted seeds from the pumpkin I hollowed out to use as a flower vase for the table centerpiece. 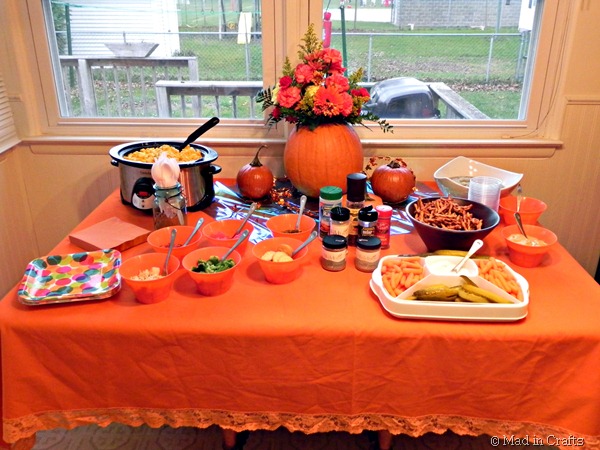 For dinner, we had a mac and cheese bar which was inspired by this Super Bowl party I found on The Nibble.  Mac and cheese, besides being a great cool-weather comfort food, is very kid-friendly but the mix-ins allow the big kids to have fun with it too.
I made up some simple ranch dip to go with the vegetables and served the pumpkin dip from The Yummy Life with pretzels.  We also served a big bowl of my crockpot applesauce. 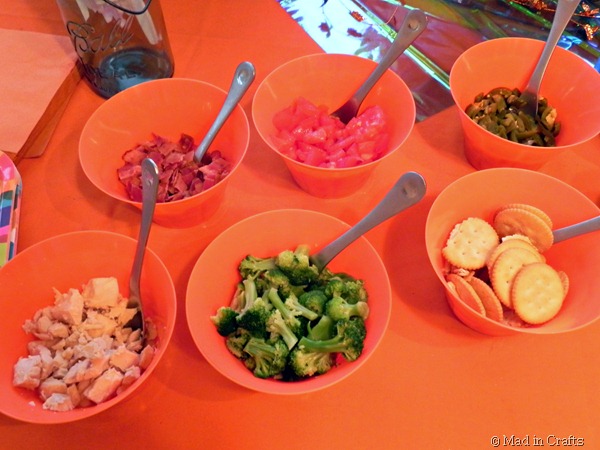 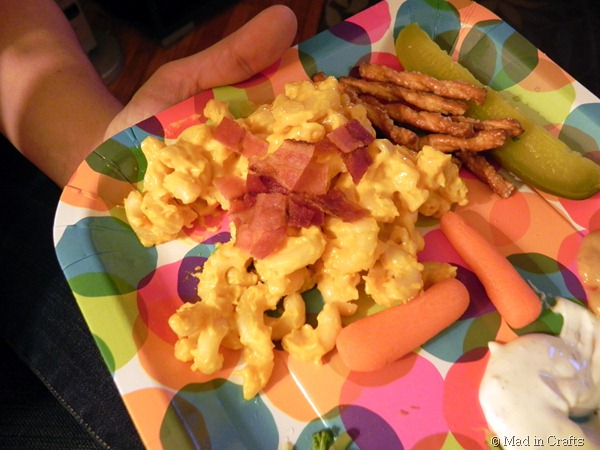 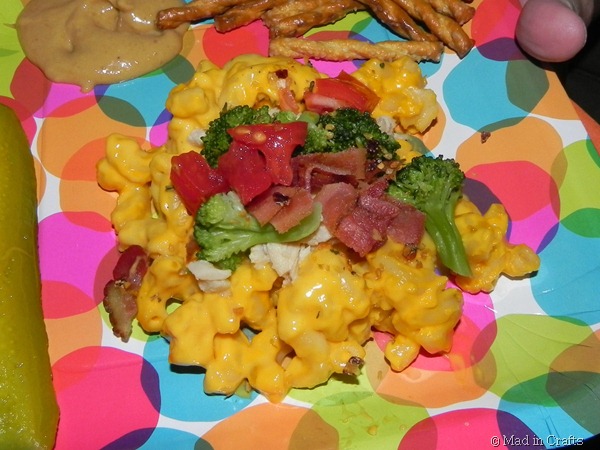 I caught a few of the guests’ variations on plain mac and cheese before they dug in. 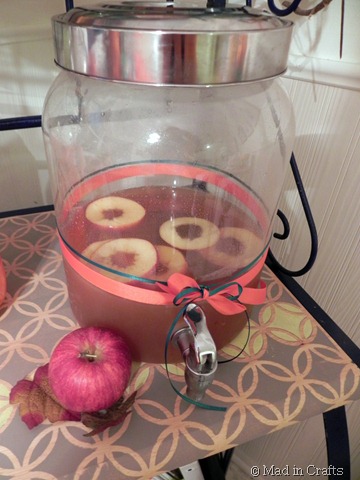 I broke out my handy drink dispenser to hold some delicious apple cider.  I am glad we had way too much because I LOVE it! 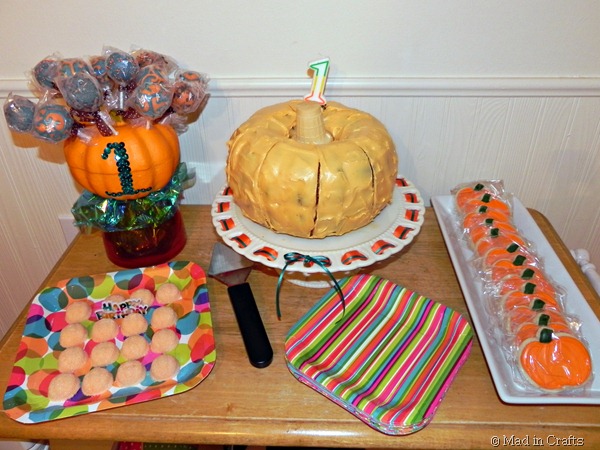 The dessert table was stacked!  Earlier this summer I won a mind-blowing party prize package from Celebrations at Home, which is a wonderful party planning resource if you have never been over there.  I cashed in some of my winnings for the party.  More on that in second.
I got the idea for the pumpkin-shaped cake from A Merrier World’s Great Pumpkin Cake.  Ours was made from two bundt cakes, one carrot and one pumpkin spice, stacked on top of each other and frosted in pumpkin cream cheese frosting.  The pumpkin’s stem is an upside down ice cream cone. 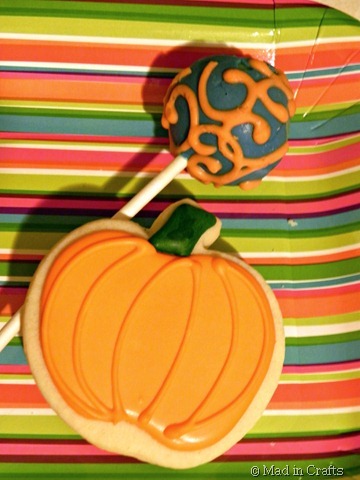 As part of my big prize package I won a dozen cake pops from Jen’s Pop Shoppe.  They were beautiful and delicious, not to mention a big hit with the kids.
I also won a dozen custom cookies from Allyson Jane.  The pumpkins were adorable and came perfectly intact! 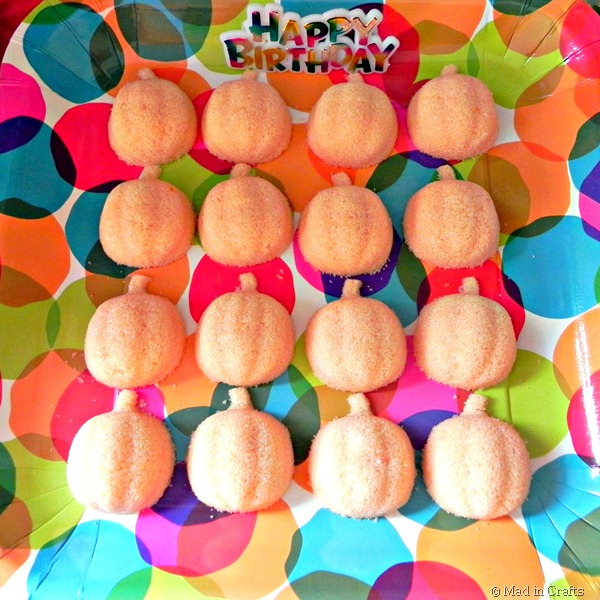 I made these pumpkin sugar cubes using a silicone mold from Dollar Tree and a tutorial from Dollar Store Crafts.  Since they are about 98.7% sugar they don’t taste like anything special on their own, but they are pretty good thrown into a cup of coffee!
Check out the post on the decorations if you missed it.  There is one more Pumpkin Party post coming yet, so check back soon!
Did you like this post?  Think it’s worth sharing?  Please share with your friends using the social media share buttons on the toolbar at the bottom of the page!
Thanks,  Jessica Hill