Because I am big, giant nerd, I started thinking about what I wanted to do for my son’s 3rd birthday party fairly soon after his 2nd birthday party was over.  Since the Pixar movie Cars was on a continuous loop on our tv, it was a pretty good bet that having a Cars theme would go over like gangbusters.
I started searching for Cars birthday ideas on the internets, but mostly only found sites trying to sell me licensed Cars plates, cups, toilet paper, etc.  Not only was it WAY too expensive, I really wanted to have a homemade party.
Fortunately, I eventually stumbled upon this post from a blog called So Wonderful, So Marvelous.  And then, I copied her.  Like crazy.  😀
FYI:  If you have never seen Cars, you might want to make a quick run to the video store or this post is not going to make any sense at all.
INVITATION:
Since this was a very casual party for close friends and relatives, I sent out email invitations.  Saves on both materials and postage. 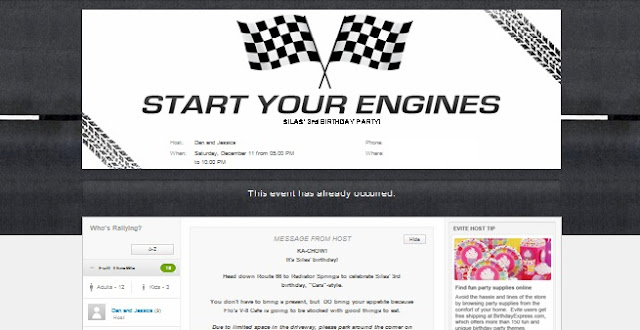 I used this invitation from Evite.  If you haven’t ever used Evite before, it is a free party planning website.  They have dozens of email invitations to choose from, along with other party planning tools like checklists and calendars.
My favorite feature is the ability for guests to RSVP right on your e-invitation.  This makes it MUCH more likely that you get accurate head counts, since all guests have to do is click a yes or no button to respond!
DECORATIONS:
I had a loose color scheme of red, white, and black for the party decorations.  Both the kitchen and the toyroom had a ceiling full of red and white streamers… I just forgot to take a picture.  Oops. 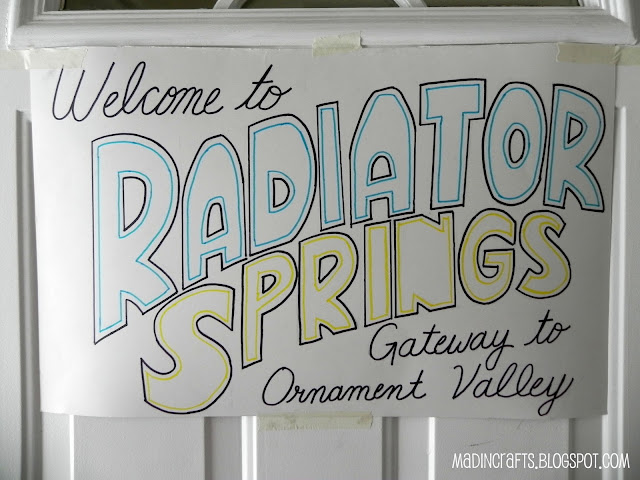 The major decorations for the party were signs to designate various areas of the party according to the Cars theme.  All the hand-drawn signs I did with markers and posterboard from Dollar Tree.  I just Googled some Cars images and free-handed them and then colored them after the birthday boy went to bed at night. 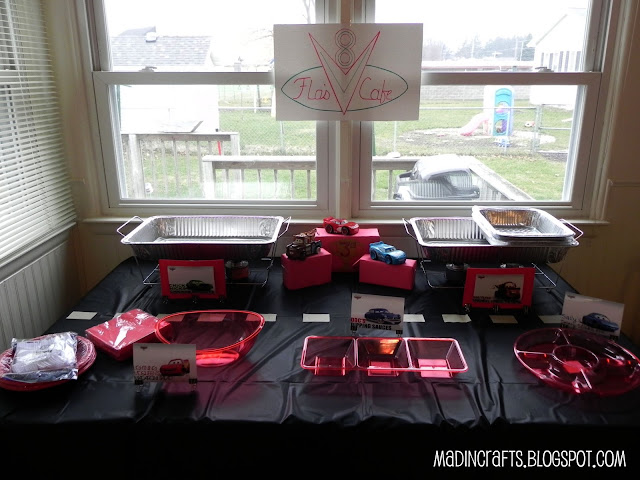 Naturally, the food area became Flo’s V8 Cafe.  I bought a cheap, black plastic tablecloth and ran a dashed line of wide masking tape down the middle to make it look like a road.
Each dish got a little sign telling guests what they were getting; not because the food was unrecognizable, but because each thing had its own cutesy name.  More on that later.  I would love to give you printables of the food signs, but since I used licensed Disney images, I am pretty sure that would be illegal.  :O
The red serving dishes are just cheap-o plastic dishes from Dollar Tree. 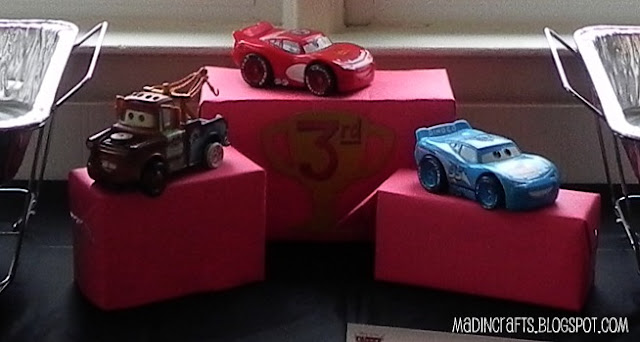 For the centerpiece, I just wrapped up a few boxes of varying heights in red contruction paper and used some of my son’s Cars toys to look like the winner’s podium at the Piston Cup race.   I made the winner’s podium read “3rd” since it was my son’s 3rd birthday. (In case you were wondering if I was a moron.  Which noone is saying I’m not.) 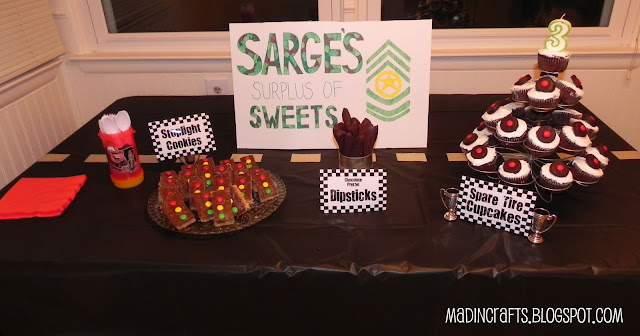 The dessert signs were just made up on Picnik and printed out.  I used a few plastic trophies from DT to hold them up.

My mom spied these trophy cut-outs at Dollar Tree and realized they looked like the Piston Cup from the movie.  I drew the lettering on and strung the cut-outs onto some curling ribbon.
FOOD:
My son’s all-time favorite meal is “chickenfries,” otherwise known as chicken nuggets and french fries.  For his birthday party meal, I just took his favorite foods and put a Cars-style spin on them.
Flo’s V8 Cafe served up: 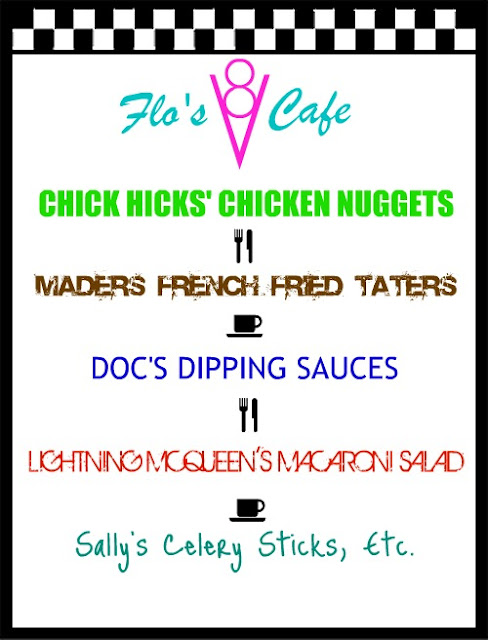 I just baked frozen nuggets in the oven and ordered takeout fries from a local diner to make things easier on myself. 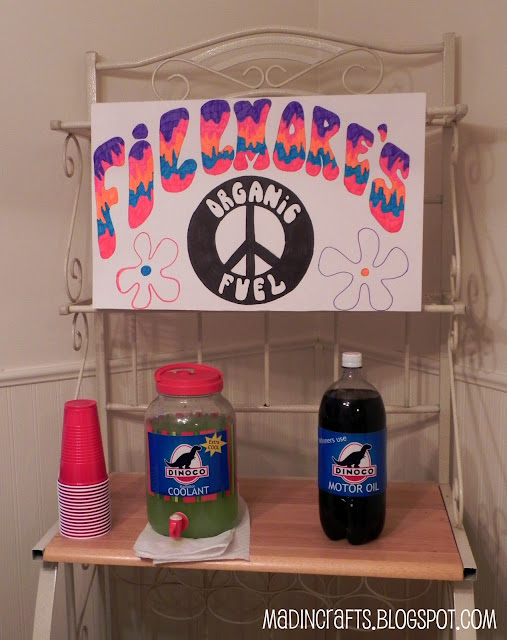 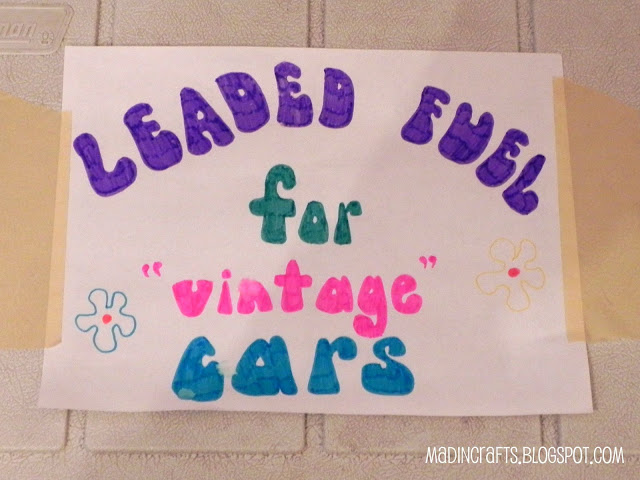 …or grab a cold one if they were old enough. 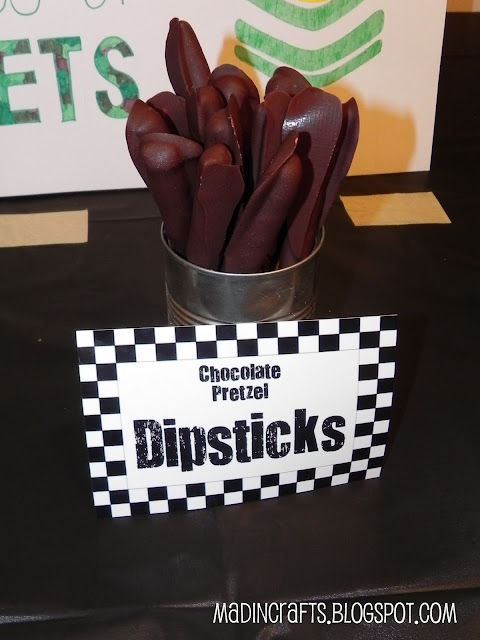 For dessert, Sarge’s Surplus of Sweets offered Dipsticks (chocolate-dipped pretzels…YUM).  Semi-sweet chocolate and salty pretzel is a flavor combination made in heaven.
To enter to win a silicone mat like the one I used to make these pretzels, go HERE. 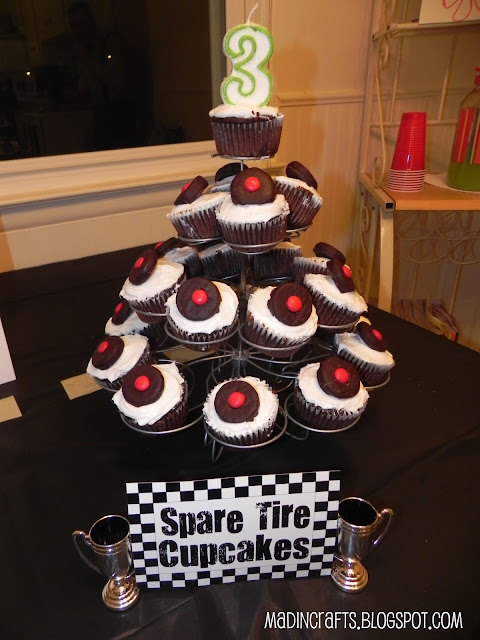 In the tradition of last year’s cake debacle, the Spare Tire Cupcakes didn’t turn out exactly as I had originally envisioned.
I was hoping to be able to punch a hole in the center of each peppermint patty to make them really look like a spare tire.  First, I had trouble finding something with which to punch the hole, and then anything I tried just decimated the patty entirely.  I ended up just pushing a red M&M into the center of each one like a hubcap.  Plus, it added to the red, white and black color scheme.  At least, that’s what I told myself.
The fun surprise of the cupcakes was that I baked a peppermint patty into the center of each cupcake too.  Those puppies really will give you a spare tire… around your belly! 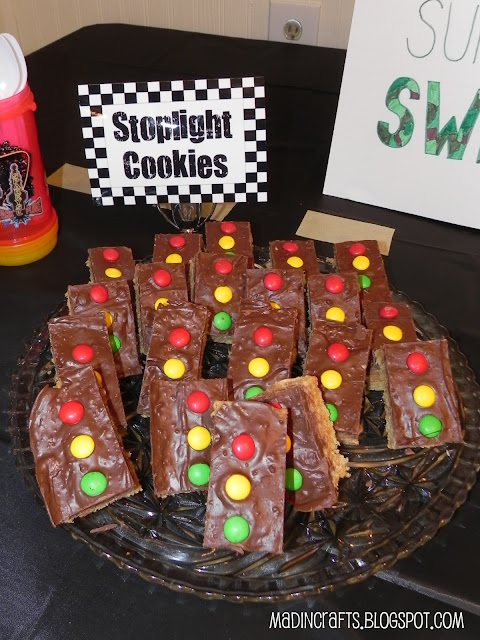 My version of Stoplight Cookies, another idea from So Wonderful, So Marvelous, aren’t actually rice krispie treats.  They are a fantastic little concoction called a scotcheroo, and they will be getting a post all their own very soon.
Activities/Games:
I did a poor job of taking action shots of the party this year.  I had my son’s Cars rug and matchbox cars set up in his toyroom for the kids to play with as they arrived.  They might have played with them for a minute or two, but spend the rest of the time COMPLETELY destroying the toy room!  Hehe.  Gotta love 3 year olds.
While I was switching the food table from dinner to dessert, my husband took the kids and had them decorate and race balloon-powered cars from Dollar Tree.  I am surprised he survived.  😛
I also had a Cars bingo game that I picked up from the dollar spot at Target on hand, but the kids were so riled up I didn’t think a nice, quiet game of bingo was gonna happen.
We had the movie running in the living room for the whole party.  I think most of the adults there had seen the film, but probably not the 1,837 times I have seen it in the past 3 years.
Thank You’s:
Etiquette says that if you send an e-invitation, it’s acceptable to send email thank you’s, which is fortunate because they are also free.  🙂  For the thank you’s for his party, I used SmileBox to create a slideshow of pictures from the party which I then emailed to all the guests.
SmileBox is another free internet service that allows you to make collages, slideshows, digital scrapbook pages, etc. which can then be emailed or posted on facebook or a blog for free.  You do have to set up an account and download the program onto your hard drive to create, but the process is painless and quick.  If you want to print out your creation or burn it onto a DVD, you can upgrade your account for a monthly fee.
This is the template I used for the thank you’s, although for the real thing I obviously used pictures of people at the party not just the decorations.  😛
After the party was over and the guests had left, my son climbed up on my lap, threw his arms around me and said, “My decorations.  My cakecake.  My toys.  My friends.  Oh, FANK you, Momma!”
And my heart melted.