In a continued effort to improve my writing, I have been researching which words are most often misused in blogging.  Turns out, inconceivable is not one of them. 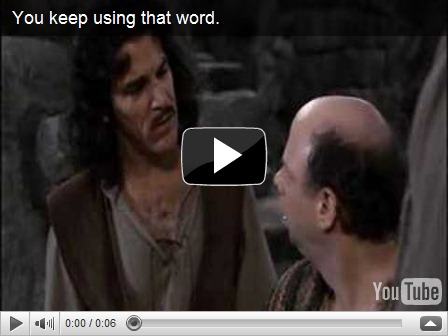 INCONCEIVABLE!
HOMOPHONES
Homophones are two words that sound the same when spoken but that have two different meanings.  Homophone errors can sneak past even the most thorough proofreading if the  eye isn’t looking out for them, so it is good to have a refresher on which homophones are most often used in craft blogging.
Compliment/Complement –
A compliment is a nice thing said to another person.  A complement is something that goes well with, or completes, another thing.

The reader left me a lovely compliment in the comments.
She said that the  cream suede fabric complemented the dark wood perfectly.

Foreword/Forward –
A foreword is an introduction to a book.  Forward is a direction.

The foreword to the book was written by Martha Stewart.
She says the best artists are always moving forward, not looking back.

My son was picking the lead paint off of the walls.
I quickly led him out of that old house.

Who’s/ Whose –
Who’s is a contraction of “who is.”  Whose is a possessive pronoun.

Who’s going to link up to my link party?
Whose link party are you joining?

.
TRICKY, TRICKY, TRICKY
Some pairs of words are tricky either because they almost sound alike or just because people misuse them so often that we get used to hearing the wrong thing!  Watch out for these buggers:
Accept/ Except –
Accept means to receive or agree to something.  Except means to exclude something.

She accepted the constructive criticism graciously.
All of the comments were positive except one.

Affect/Effect –
Affect is a VERB meaning to make a change.  Effect is a NOUN defined as the consequence of a cause.

I wonder how the Mod Podge will affect the homemade paper.
You can use plain Elmer’s Glue to create a crackle effect.

I took the manufacturer’s advice and let the stain cure for 24 hours.
I advise you to wear plastic gloves when staining the bookshelf.

Farther/ Further –
Use farther when speaking about distance.  Use further when you mean “more” or “in addition to.”

Extend the edging two inches farther than the end of the table runner.
You may need further stitching to keep the applique in place.

The bridesmaids dress has fewer sequins than the bridal gown.
However, the lack of sequins doesn’t make the dress any less ugly.

Make a loose bow at the top of the wreath.
If you lose the ends of the ribbon, let go and start again.

“WATCH YOUR PHRASEOLOGY”
Some of these phrases tend to be used in an ungrammatical fashion, and others are just plain wrong.  Each italicized example will use the phrase correctly.
ERROR: “Literally”
Literally means “exactly and without exaggeration.”  Most people actually ARE exaggerating when they use the word.    Misusing “literally” will really get the grammar police on your heiney.

He literally ran down the airport terminal to catch his flight.

ERROR:  “Suppose to/Use t0”
The verb in each of these phrases should be in the past tense.  Don’t forget the “d.”

The writing prompt says I am supposed to tell my readers what I had for breakfast.

ERROR:  “Anyways “
People might SAY “anyways,” but it is not grammatically correct.

But I don’t think I will tell them what I ate anyway.

ERROR:  “Could care less”
If you couldn’t care less, that means you care the absolute minimum amount possible.  You are saying you basically do not care at all.  If you could care less, you might actually care quite a bit.

My readers couldn’t care less that I had Cheerios today.

ERROR:  “For all intensive purposes”
The correct phrase is “for all intents and purposes.”
ERROR: “All of the sudden”
The correct phrase is “all of a sudden.”
ERROR: “A whole nother”
In real life, I say “a whole nother” all the time.  I know it’s wrong, but I like it.  What is a nother?  What is a partial nother?  “A different story entirely” is a grammatically correct replacement. 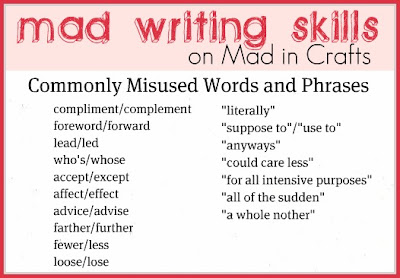 Pin It
AS ALWAYS, the Mad Writing Skills Series is meant to be aid to those looking to brush up on their blog writing skills, in the same way a Ways to Take a Better Picture series would be meant to help improve photography skills.  Perhaps due to some early elementary school traumas, many people get all twitchy when grammar errors are brought up.
.
Fear not, gentle readers, this is all done in support and love, and not to impose rules and regulations on the bloggy world.
.
And I promise not to make you stay after class and bang erasers.