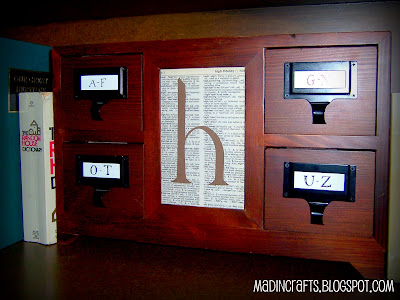 In order to be a little more organized, my husband and I have a designated “key spot” in our home.  It’s just a basket on the bookcase by our front door, but at least we know we are putting our keys in the same spot every time we come in the house.  It does save us from last minute searches for the keys as we are rushing out the door.
However, the key basket has become a magnet for all sorts of crap other than keys too.  Anytime there is a little bit or bob that doesn’t have a home, it ends up in the key basket.
In order to demonstrate my point, I am going to share with you the ridiculous amount of crap that was in the basket when I dumped it this morning.  Feel free to use this picture as a Seek and Find puzzle for your children. 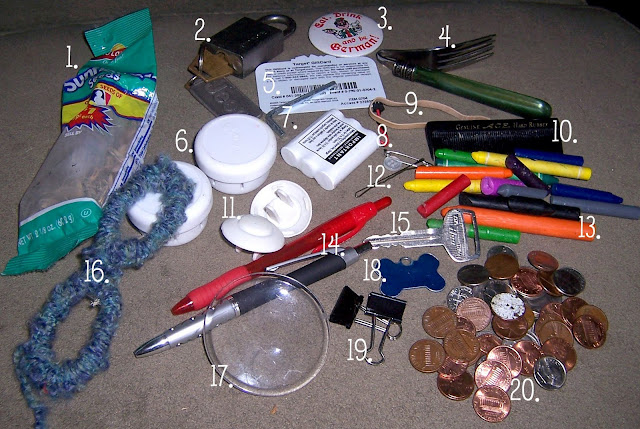 In that one small basket were the following:
1. A half-finished package of sunflower seeds
2.  The lock and keys we used to secure the U-Haul when we moved here over a year ago
3.  An “Eat, Drink, and Be German” pin
4.  A bent fork from my Cheapy Cheaperson curtain tiebacks
5.  A partially used Target gift card
6.  Two child safety devices for tying up mini-blind cords
7.  An Alan wrench
8.  A battery pack from a long broken cordless phone
9.  A rubber band
10.  A broken comb
11.  Two outlet covers
12.  A bobby pin, a button, and a safety pin
13.  16 broken crayon pieces
14.  Two ballpoint pens – one working, one not
15.  The key to my first car…that was hauled away for spare parts two years ago
16.  The glasses from my Anthropologie Knock-Off Necklace
17.  A magnifying lens
18.  A dog tag with our old address on it
19.  Two binder clips leftover from my Class Reunion Centerpieces
20.  $2.67 in spare change

Obviously, the time had come to find a solution to this problem. 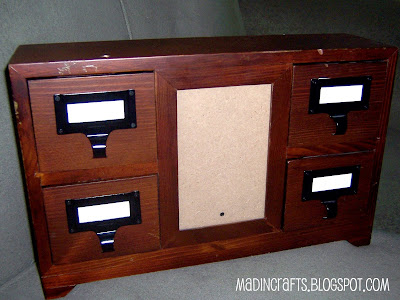 Fortunately, I found this little cutie at Goodwill for $1.99.  It was pretty banged up and had a magazine clipping of a local sports celebrity in the photo frame, but it had potential. 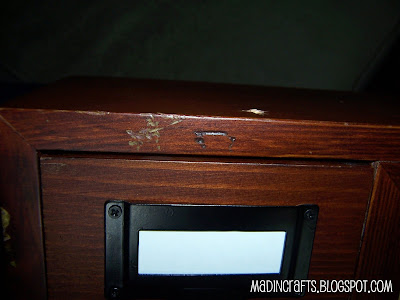 After removing the local sports hero, my first move was touching up the bumps and bruises.  Where there were noticeable gouges in the wood, I just took a washable brown marker and colored the gouges in.  Then I just wiped the excess marker off with my fingers while it was still wet. 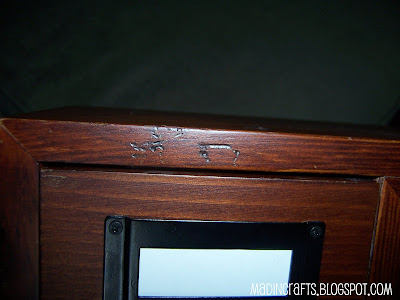 It doesn’t get rid of the blemishes completely, but it does camouflage them pretty well.  I have used this trick on dressers and bookcases too. 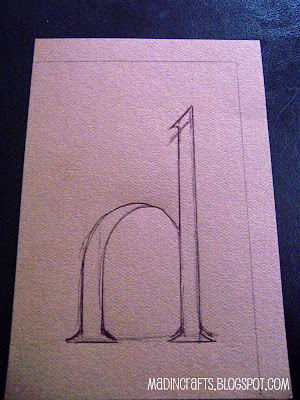 I brainstormed a little bit about what I wanted to put in the photo frame.  I liked the whole card catalog look of the unit, so I continued with that theme.  I drew out a backwards “h” (It’s our last initial) on some brown card stock and cut it out.  If you have a Cricket or something else fancy, feel free to take the easy way out! 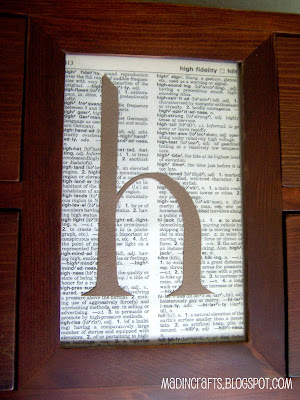 I glued the letter to a page I ripped out of an old, unused dictionary that I dug out of the basement.  Nobody other than I would notice that the page I chose was the page with the entry for “hill,” our last name.  I’m a nerd. 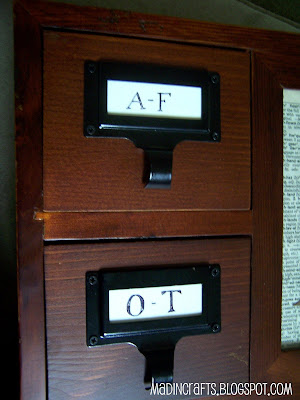 I labeled the drawers as if they would be holding cards from an old-fashioned card catalog.  Are there any libraries that still use actual card catalogs anymore? 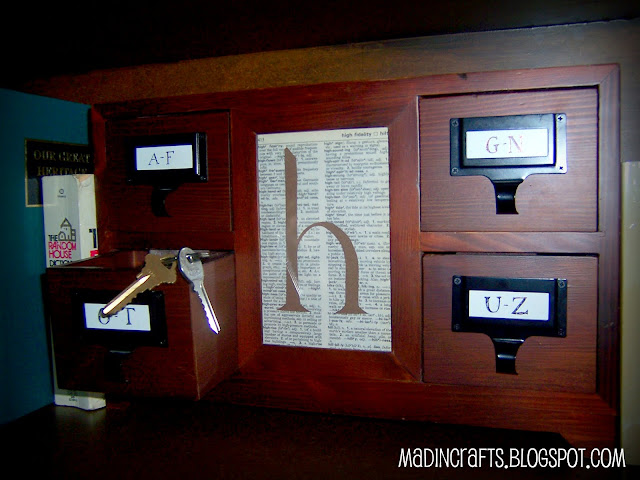 It replaced the junky old basket on the bookcase, and I think it looks great.  A set of keys fit just perfectly in the drawer with no room for any other crap!  Hooray!
Linked up at these parties.