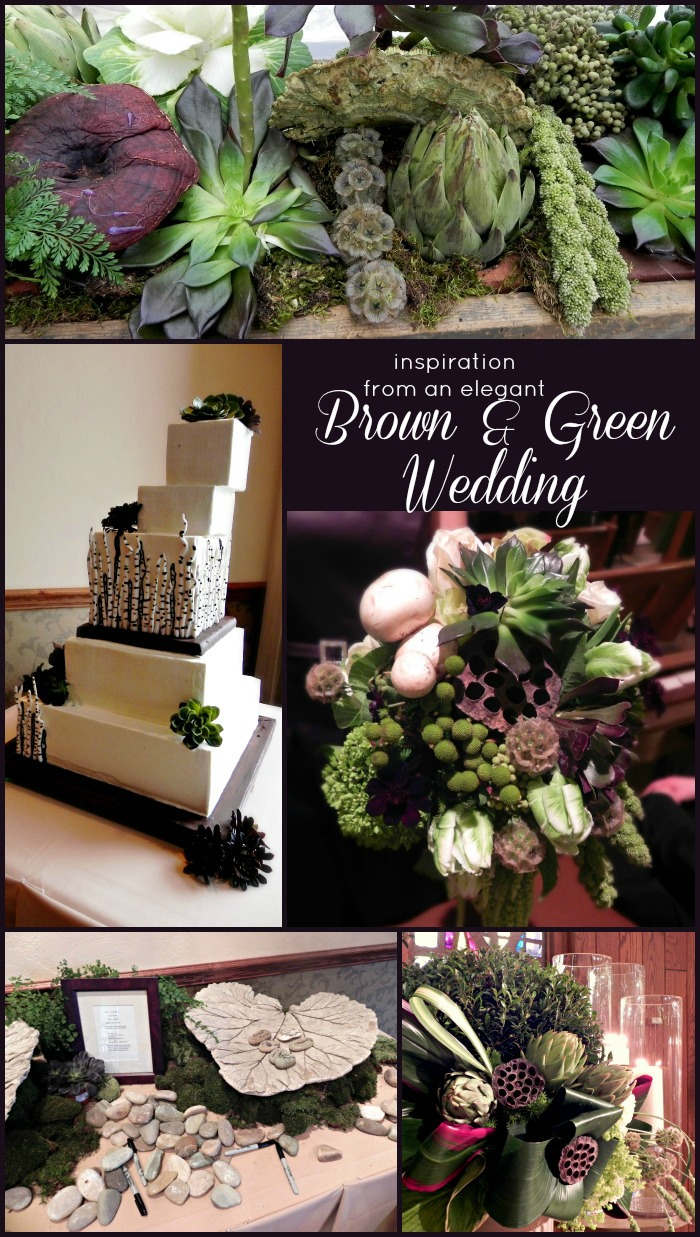 Last Saturday I attended my cousin’s wedding, and I immediately developed a crush on the décor.  The details were not only stylish and elegant, but they were impressively thoughtful and cohesive.   My cousin was a very hands-on bride, from the design to the execution, and many aspects of the wedding were DIY’d.   I am sharing these pictures to inspire you to steal details for your special event or just for around your own home! 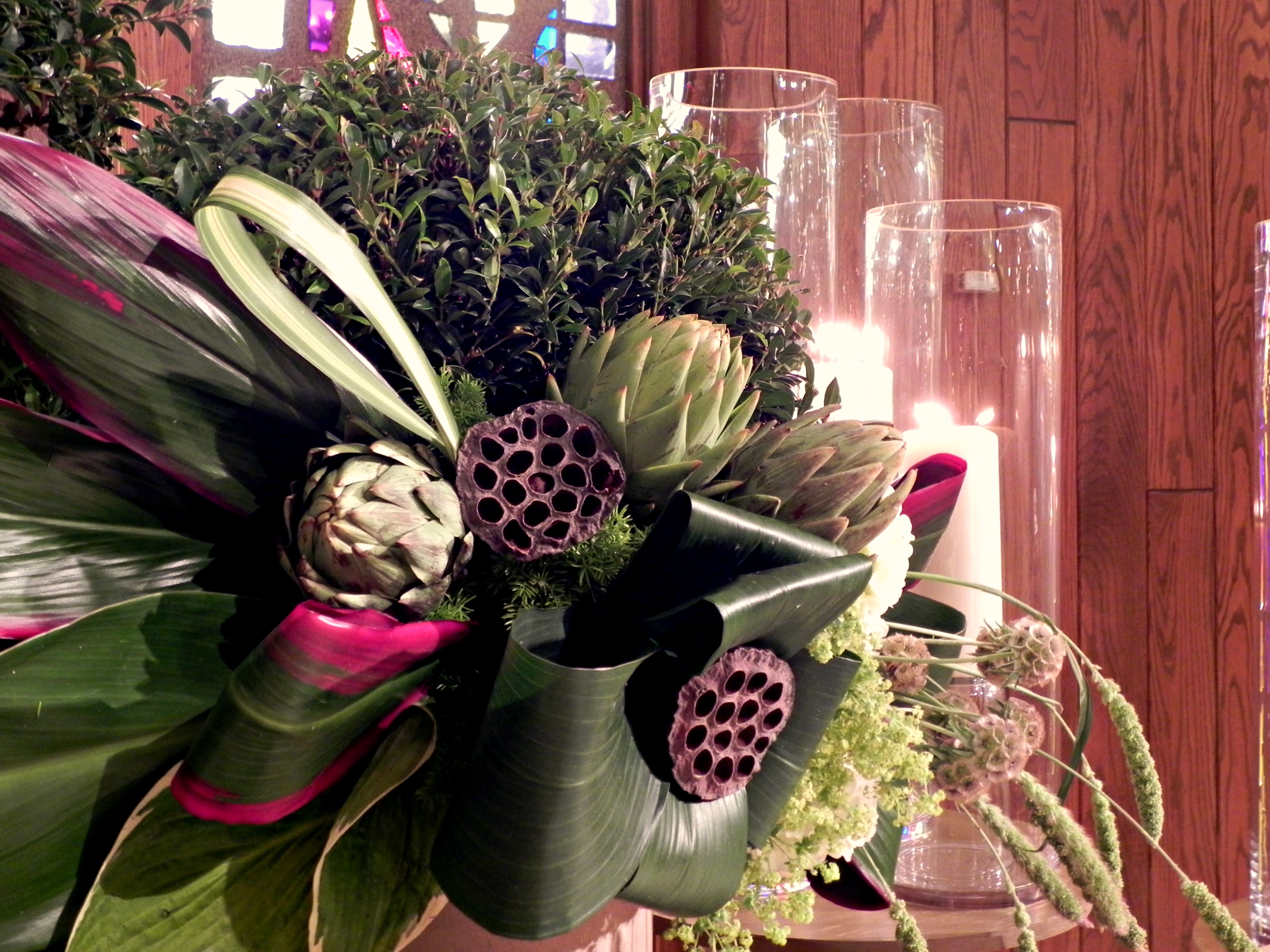 The wedding colors were a dark chocolately brown and woodsy green, perfect for an October wedding. 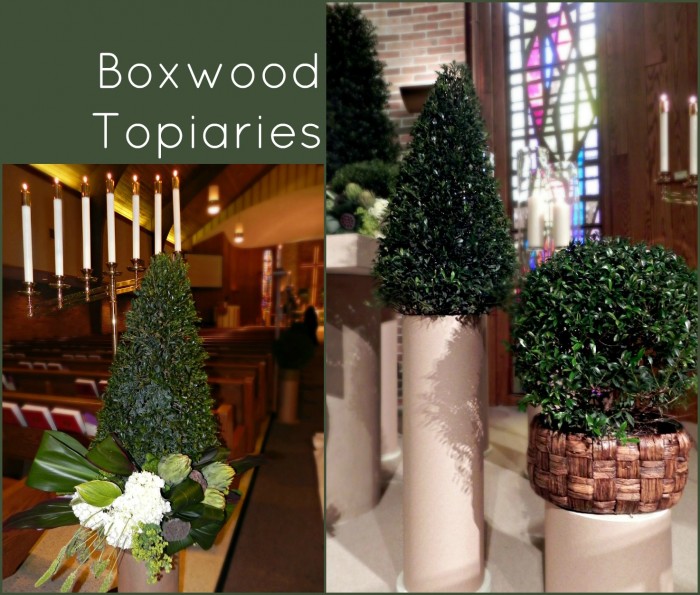 The aisles were lined with beautifully shaped boxwood topiaries on stands.  And there were several more around the altar at the front of church. 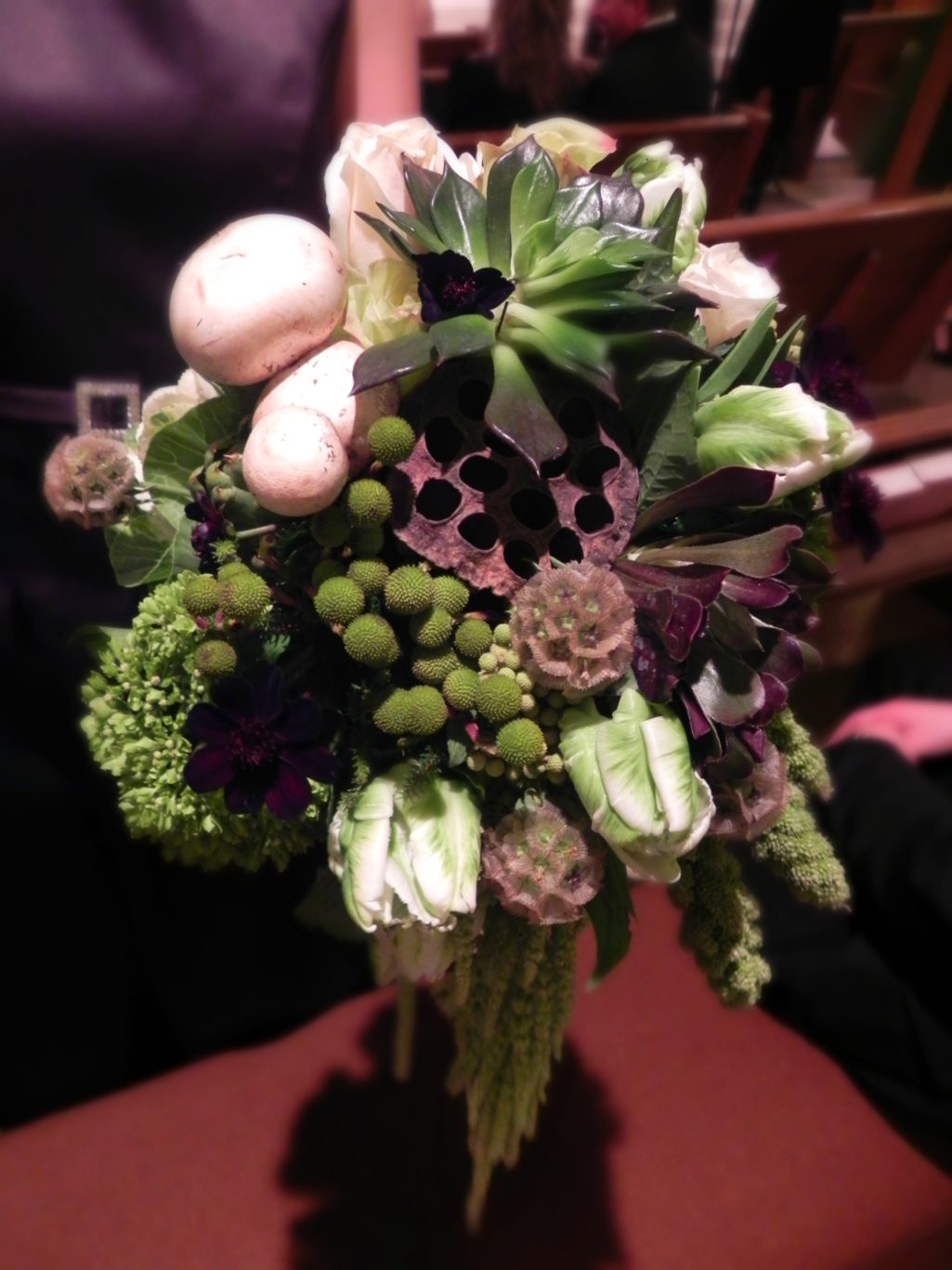 The bridal bouquet was absolutely lovely.  This mixture of tones of green, white, brown, and deep plum would also make a sophisticated color palette in the home.  I really appreciated the non-traditional materials like succulents, artichokes, and button mushrooms.

To demonstrate how all the details were carried over from one aspect of the wedding to another, the hors d’oevres at the wedding reception included crostini with either mushrooms or artichoke.  A classy touch. 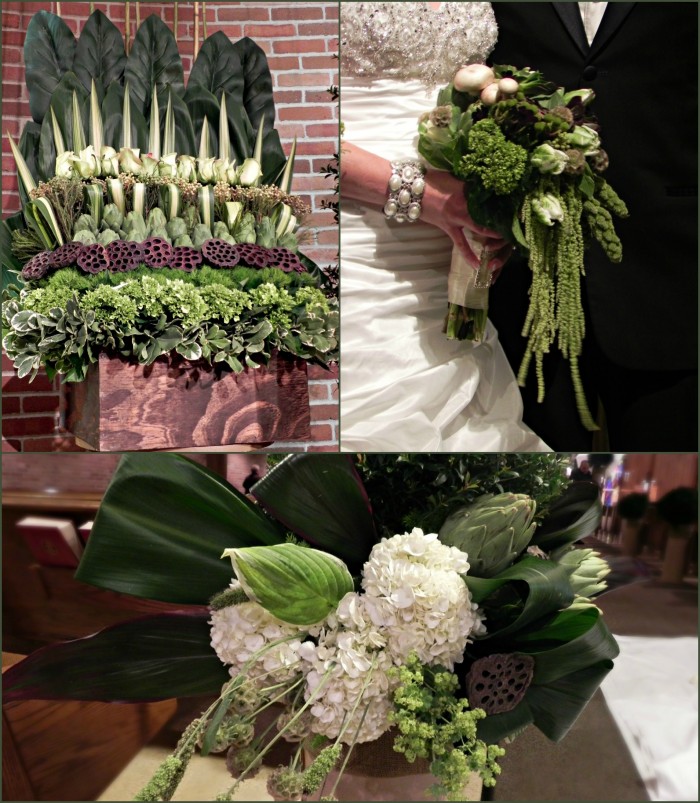 My cousin has worked for a florist for several years, and she designed all the flowers for the wedding and reception.  The colors and materials were repeated over and over in each design to create a cohesive look.  Even the rhinestone buckle on the wrap of the bride’s bouquet mimicked a similar accent on the bridesmaids’ chocolate brown dresses.

A note to grooms-to-be who think no one will ever notice those little details that your fiancé wants to include in the wedding:  You’re wrong.  Get used to it.  It won’t be the last time. 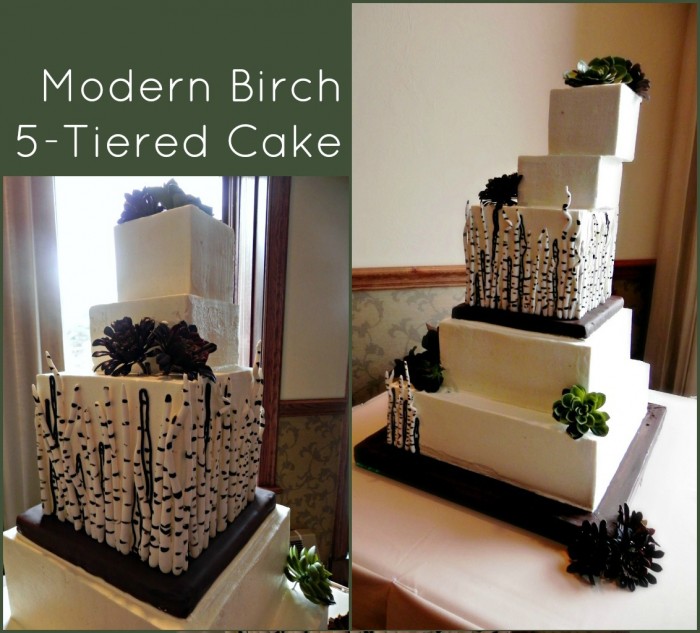 Shelley also designed the 5-tiered wedding cake which was made by a local baker.  The birch trunks were made of gum paste, but all the tiers were frosted with buttercream.  I was impressed with the crisp, straight edges of the square tiers. 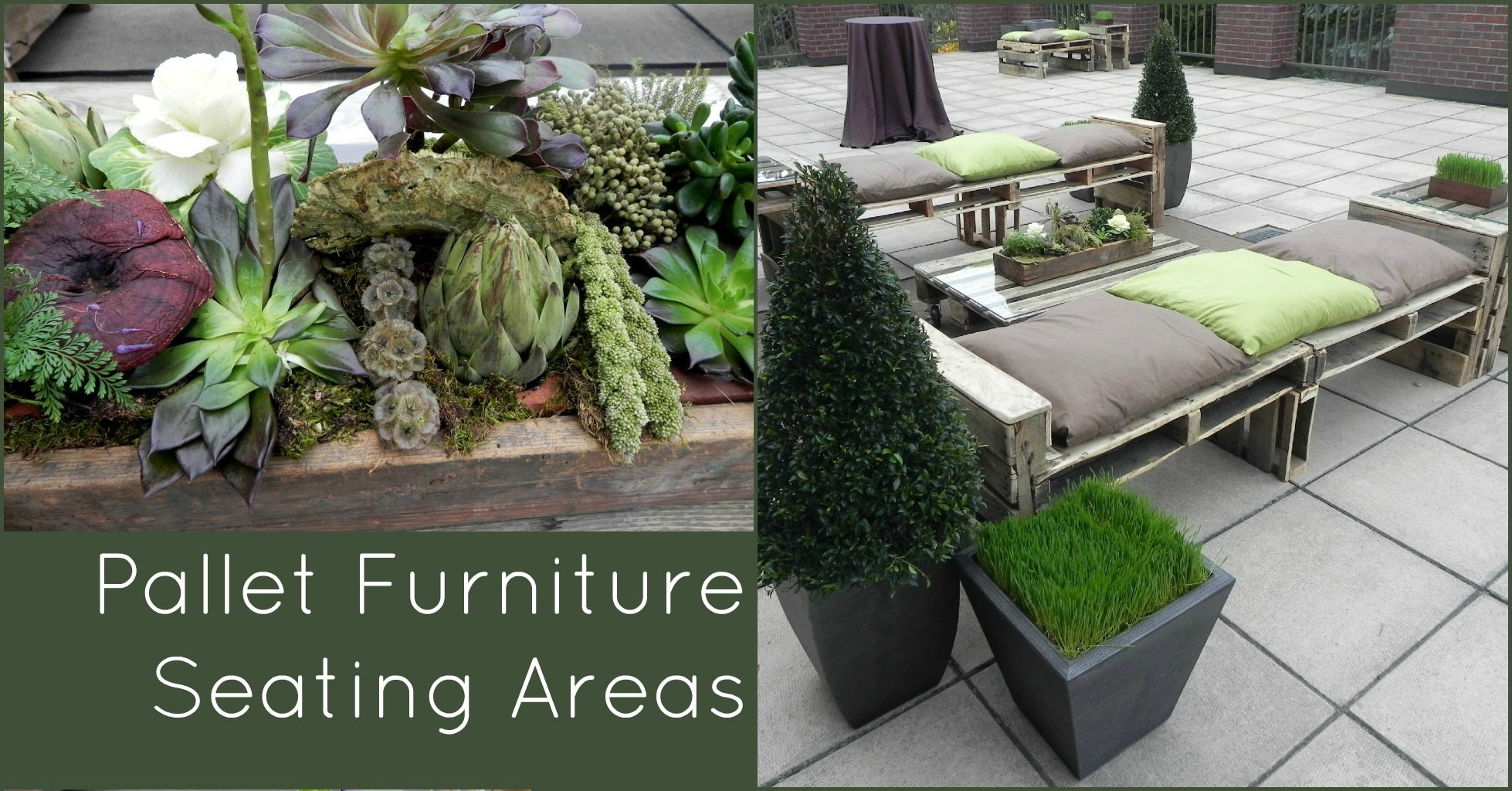 The reception was held at a country club that had an outdoor space adjacent to the hall.  My cousin and her fiancé created three distinct seating areas made of pallet furniture that they built for the wedding.  The boxwoods from the church were brought to the reception to brighten up the patio. 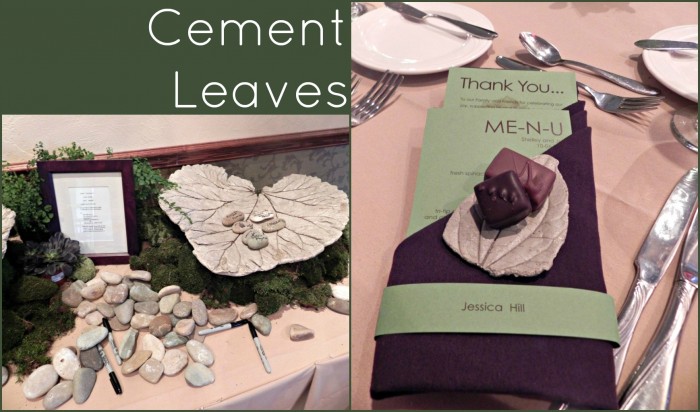 Instead of a traditional guest book, the couple asked guests to write words of wisdom or other sentiments on stones which were then displayed on large cement leaves made from impressions of hosta leaves.  Smaller versions of the cement leaves were used to hold the chocolate truffles used as wedding favors. 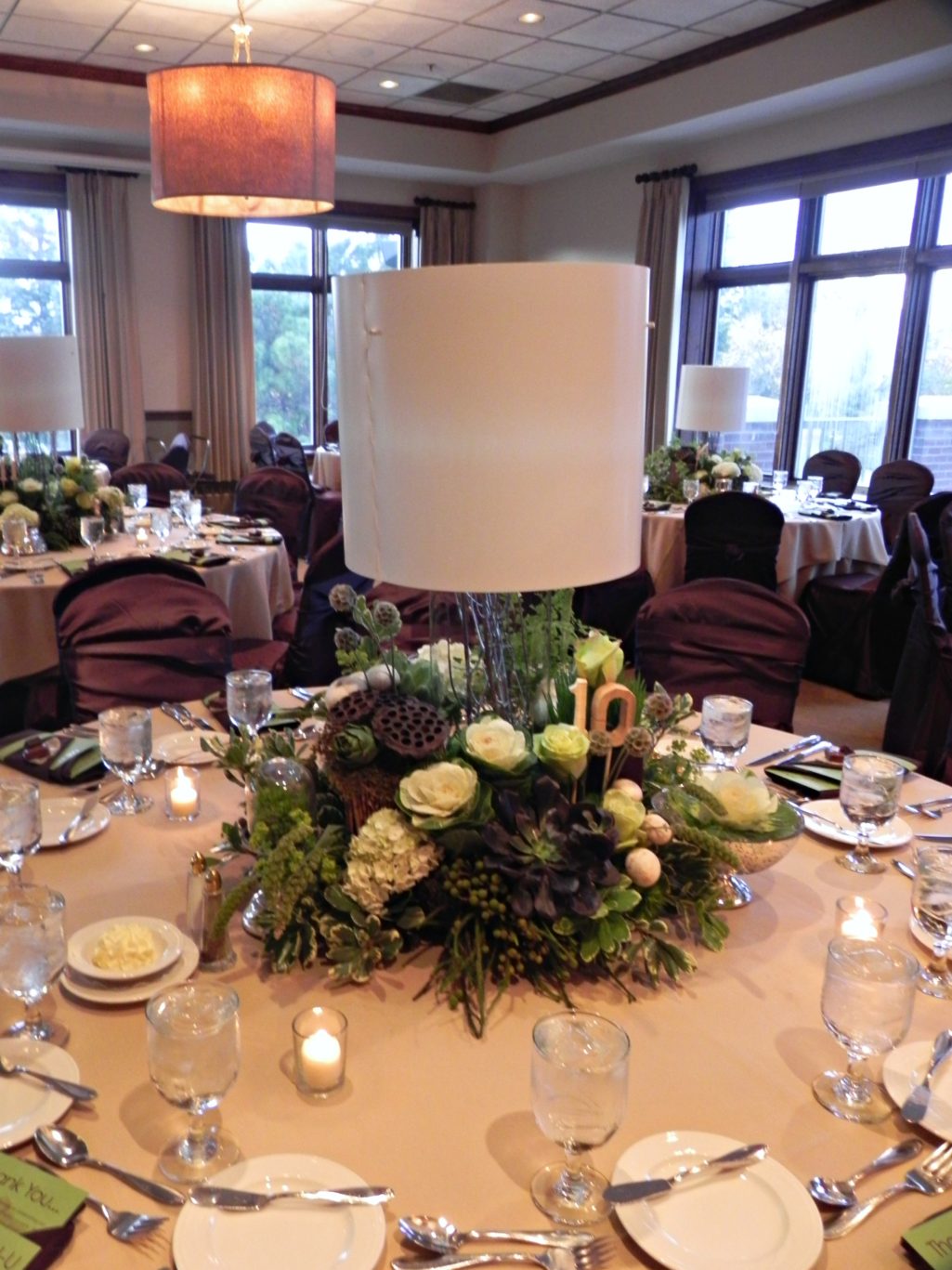 The centerpieces at the reception were as beautiful as the rest of the floral displays.  On closer look, I found out that the “lamps”  in the center of some the tables were actually large glass vases filled with twigs and sticks.  A piece of plastic sheeting was riveted together to form a drum shade and was placed on top of the vase.  Small LED lights illuminated the entire lamp when the room’s lights were dimmed.  Again, this is an idea you could steal for your home décor.

One of the details I was particularly impressed with were the chandeliers.  My cousin didn’t care for the club’s brassy chandeliers, so she and her fiancé created drum shades out of craft paper and plastic ribbing for ALL the chandeliers! 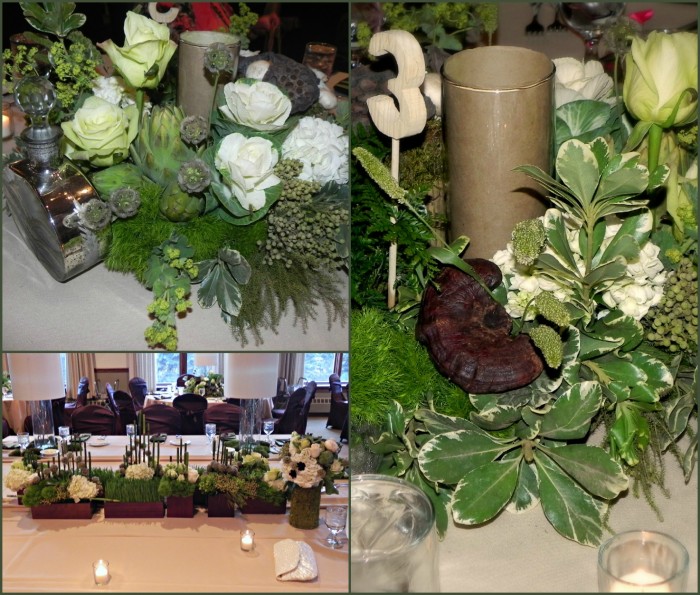 I hope you found some ideas from the wedding or just enjoyed reveling in the photos with me.  I get to experience more DIY wedding inspiration at my brother-in-law’s wedding, so be prepared for more nuptial goodness next week!