You are here: Home / Crafts / Misc / How to Preserve a 25-Year-Old Cheeseball in Resin 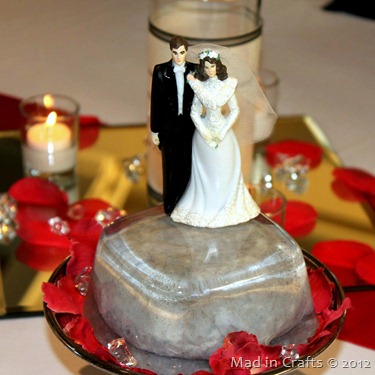 My family consists of a bunch of crazy people.  Mostly the good kind of crazy… but not always.
Sit back, friends.  I am going to tell you a tale.  The year was 1987.  Michael Jackson debuted “BAD,” “The Simpsons” aired its first episode, and Prozac was released for the first time.  And my mother made a cheeseball.
My mom’s side of the family always gets together for Christmas Eve, and we open presents and snack on whatever appetizers we have brought to share.  In 1987, my mom decided to go all fancy on us and make a festive holiday cheeseball from scratch.  It was a lot of work, but it was Christmas Eve so it was worth the effort.
She packed it up and brought it to the Christmas Eve celebration.  And nobody ate it.
No problem.  Mom just put it in the fridge and brought it out for the family on Christmas Day.  (Yes, we all get together on Christmas Day too).  She set it out with our delicious Christmas Day dinner.  And nobody ate it.
Getting a little discouraged at the fact that she had put so much effort into this cheeseball and no one was appreciating it, she put it in the freezer.  Waste not, want not.  She carefully thawed it out and brought it along to our family New Year’s Eve party.  (We have lots of family togetherness time.)
And nobody ate it.
By now, Mom was more than a little ticked off.  She decided that if she put that much work into this “D@mn Cheeseball” she was going to refreeze it and bring it out to every family gathering until it was eaten.  My mother keeps her word. 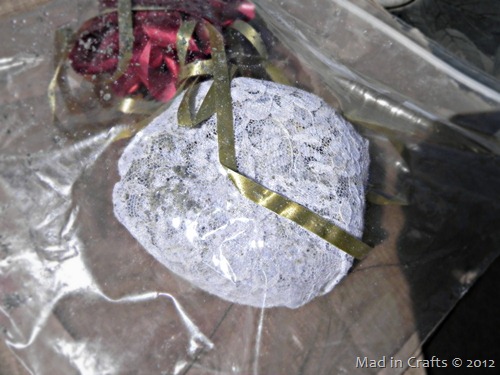 For 25 years now the D@mn Cheeseball, as it is now lovingly known, has made its appearance at almost every family function.  Somewhere between a running joke and a family heirloom, the presence of the D. Cheeseball is what signifies that a family festivity is of real importance.
After a few years, we started dressing up the cheeseball to properly commemorate each family event. 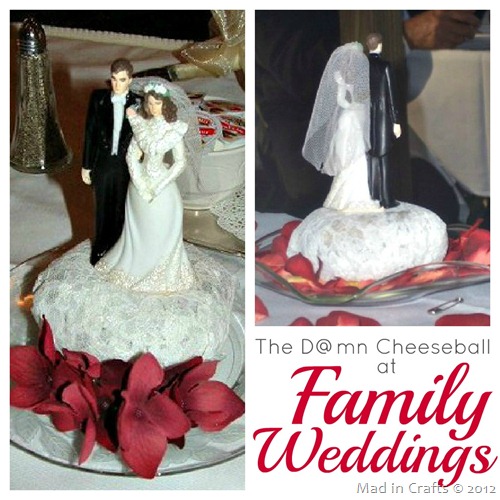 Lace, a cake topper, and a place at the head table for family weddings. (I love that the plastic bride and groom even have enough sense to look concerned.) 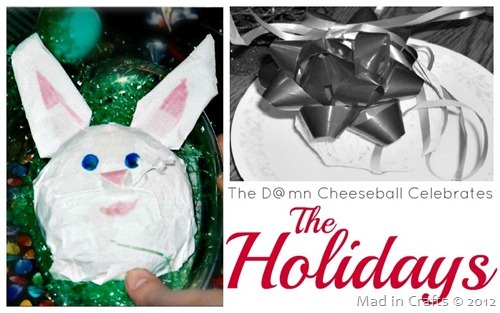 Bunny ears, gift wrap, or turkey feathers for the holidays. 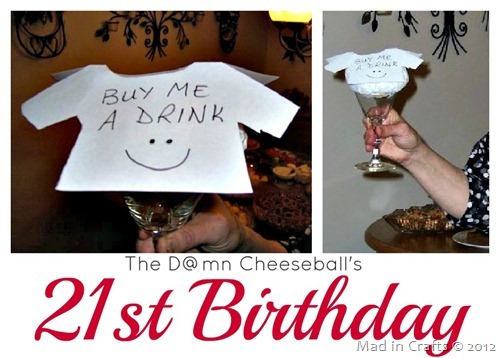 Four years ago, we even celebrated the D. Cheeseball’s entrance into adulthood. (The cheeseball favors single malt scotch – aged, but not older than it is.)
But the years were beginning to show for the cheeseball.  After more than two dozen years of thawing and refreezing, trips across state lines in a small red cooler, and eating through a few layers of tin foil, it was time to find a more permanent solution for keeping and displaying the cheeseball. 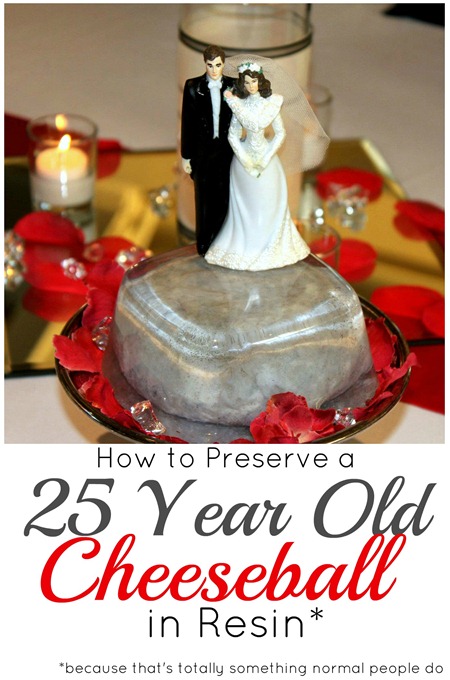 Don’t act like you aren’t impressed by our commitment to the joke.
If you too have priceless food stuffs that you would like to preserve for eternity, read on.  If not, read on anyway. 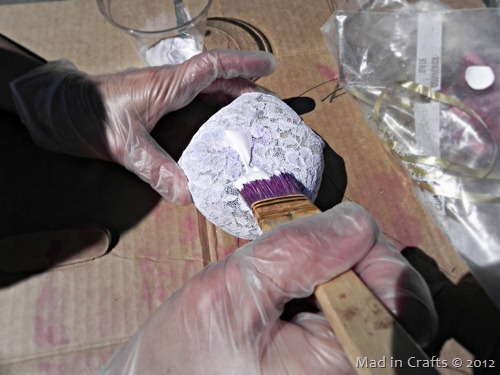 NOTE:  My mom actually undertook this project, I was just there to document.
The directions for the resin suggested sealing your items before encasing them in the resin. I have to stop and wonder if the person who wrote those instructions ever imagined the myriad ways in which those directions would be carried out.  “Your items” leaves so much room for interpretation.  Did he or she envision that one of those “items” would be a ball of cheese older than many members of the cast of Jersey Shore?
Anyway, Mom began by brushing on a coat of Outdoor Mod Podge.  Then we realized it was probably not a good idea to use the same paintbrush I used for my tie dye project. 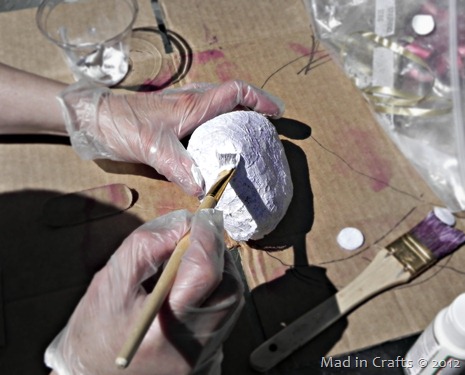 After switching to a CLEAN brush, my mom finished coating the whole cheeseball.  Then we let the Mod Podge dry. 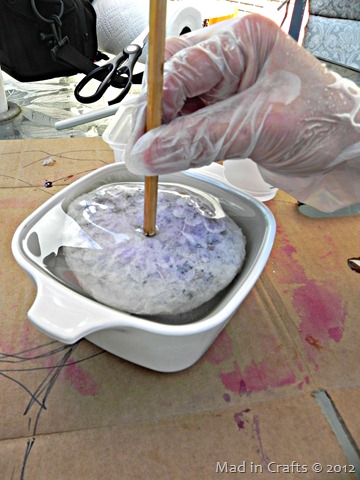 The Resin Crafts blog, especially the series on Deep Pour casting, was a HUGE help in the resin casting process.  And I am sure they are extremely happy to be linked to and associated with this trailblazing project.
We were slightly concerned that the combination of the resin chemicals and whatever that cheeseball now consisted of would result in toxic fumes or a small-scale conflagration.  Fortunately, the only real issue we had during the whole process was that the cheeseball kept floating to the top of the resin!  I don’t even want to know why that thing floated.
After a few days of curing, the cheeseball was ready to come out of the mold. 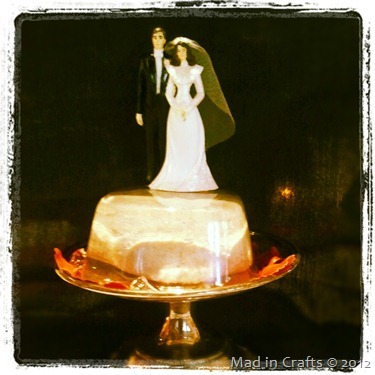 If the D@mn Cheeseball had to make an entrance to the Hunger Games, this is what it would look like.
The newly encased D. Cheeseball made its debut at my cousin’s wedding in Wisconsin on the 4th of July.  It was the first time the cheeseball had been taken out of state without having to be transported like a donor organ, so it was a lot less stressful for everyone involved.
I think the cheeseball looks lovely in its glassy home, and we are relieved to know it will survive many more years of our family’s craziness.
If YOU would like to start your own cheeseball tradition, here is the ORIGINAL recipe that my mother used 25 years ago.  Enjoy – cautiously.
D@MN CHEESEBALL