You are here: Home / Uncategorized / Greening Up the Lawn with Scotts Snap

This post brought to you by Scotts®. All opinions are 100% mine. 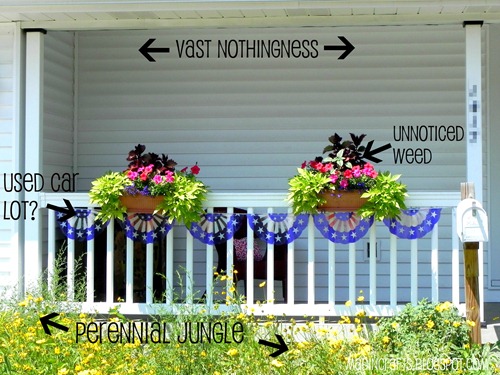 Do you remember my front porch from last summer?  Later in the season my mom and I (mostly my mom) yanked out that tangled jungle of weeds and random perennials that took up the space between our porch and the sidewalk to our house.  What is left now is a barren patch of mud.
Now that the weather has gotten so nice, I have started thinking about putting in some grass seed and some fertilizer down before the weeds rear their ugly heads again.

Have you seen the new Scotts® Snap® Spreader System?  It looks so much easier than those old fashioned weed and feed spreaders.  True story: my parents once fertilized their lawn with one of the old style spreaders, but half of it was broken, so they ended up with stripes in their lawn including up and down the small berm in the middle of the yard.  The grass looked like a giant cinnamon roll!
In the Snap Spreader the the Pac snaps right into the spreader, so you don’t have to worry about pouring the messy fertilizer all over the garage.  Also, Pac self-seals when you remove it from the spreader, which makes it much easier to store.
If you like the Scotts Lawn Care Snap perks on Facebook, you can win some great prizes during the month of March.