Did you know that Benjamin Franklin thought that the turkey would make a better national bird than the bald eagle?  Dude had a lot of great ideas, but that wasn’t one of them.  Can you imagine a golden turkey squatting on top of every flag pole in America?  You can’t?  Well, it would look a lot like this: 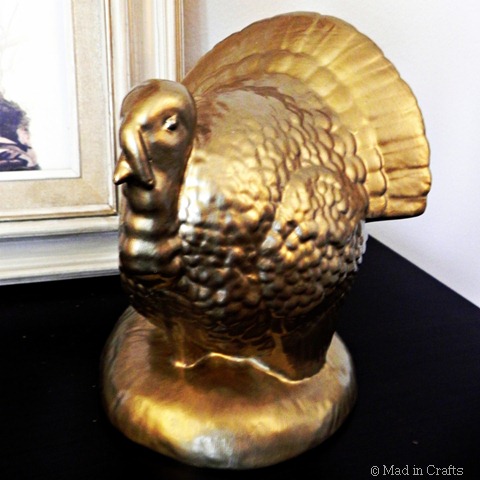 Now that we are officially in Thanksgiving month, I decided to get my turkey on.  But, turkeys are ugly.  So what do we do with ugly things?  Paint them metallic gold, duh! 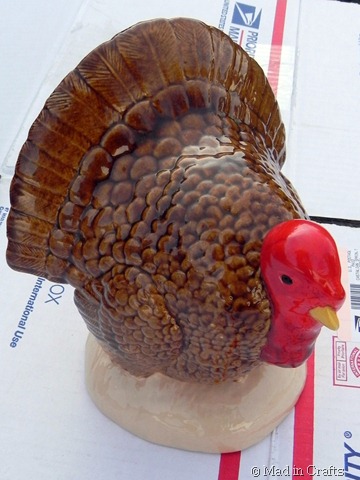 I found this ceramic turkey at a local thrift store for cheap.  All things considered, it was in pretty good shape, but he didn’t have the WOW factor he really deserved. 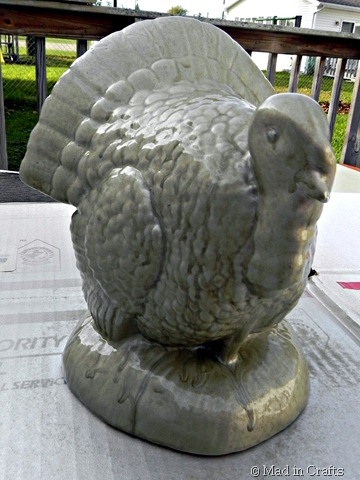 First, I took him outside and gave him a quick coat of shimmery gold spray paint, just as a primer.  Looks like I got a little heavy-handed in some places.  It didn’t affect the final product. 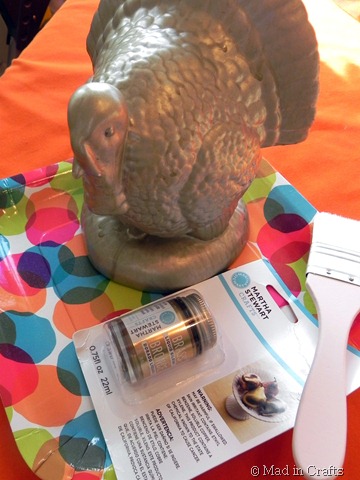 The gold spray paint gave him a bit of shimmer, but not a real solid gold look, so I decided to try out Martha Stewart Crafts’ liquid gilding in brass.

There are some scary warnings on the packaging telling you to have proper ventilation while working with it and not to let it make contact with your skin.  It is pretty stinky, I will give them that. 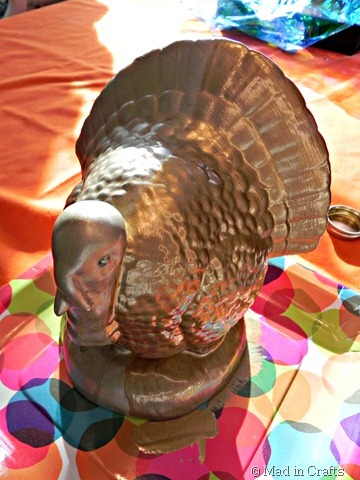 Just look at the difference between the gilded half (the right side) and the non-gilded side. 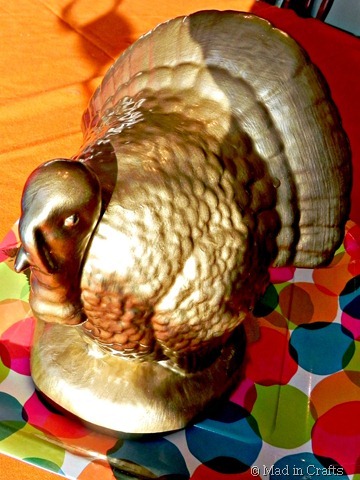 I may have busted out my Goldmember accent while I was painting the turkey.

My solid-gold jive turkey needed some comparably bling-y Thanksgiving accents around him, so naturally I bought this: 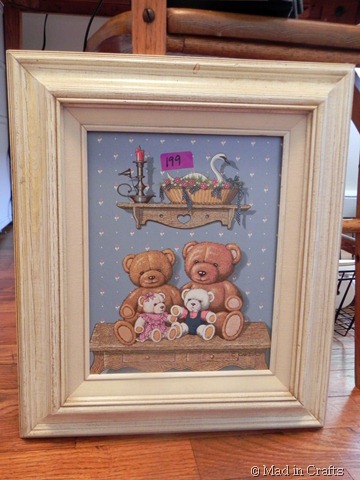 Don’t worry.  I know it’s horrendous. Wait for it… 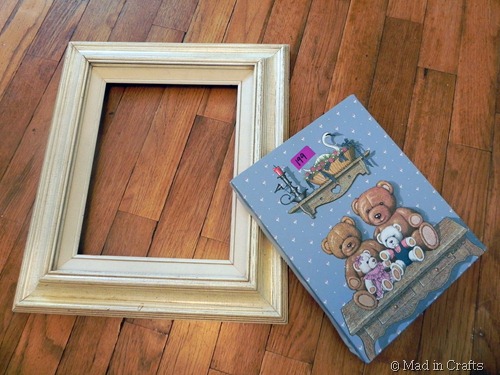 By removing a few nails I ended up with a small canvas and a decent looking frame for $1.99!  It’s all about the vision, friends. 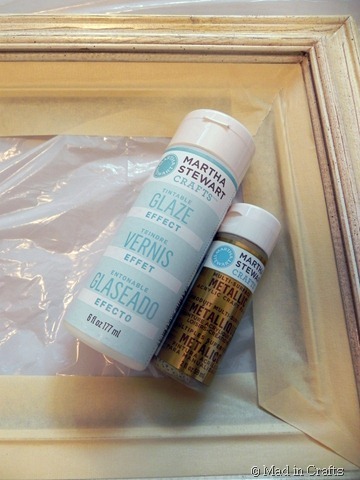 Full disclosure:  I am not a fan of glazes on wood.  Most of the time I think they just end up making the piece look dirty.  BUT, I wanted this frame to have a golden shimmer without actually painting it gold, so I gave the Martha glaze a shot. 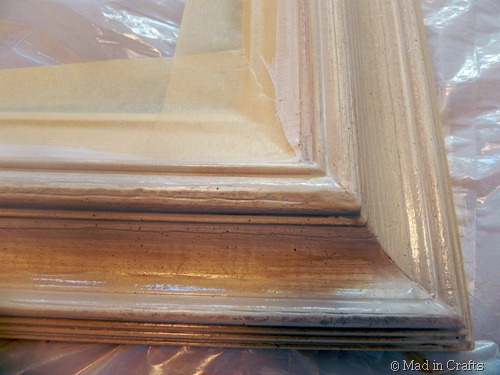 I taped off the canvas part of the frame and applied a few coats of the glaze I mixed up.  I ended up painting the canvas with the metallic gold acrylic paint and accenting one stripe of the frame with liquid gilding. 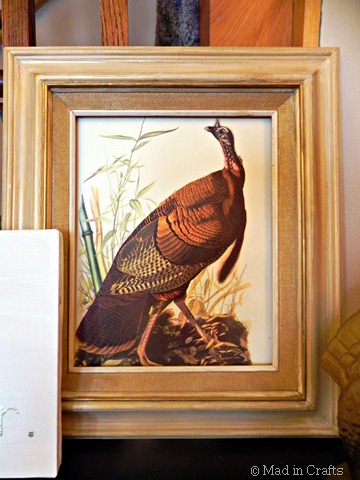 I framed up an Audubon wild turkey print in the finished frame.  The turkey is still ugly but at least his frame is nice.  In this picture the glaze looks just, well, dirty, but in real life it does have a nice shimmer to it. 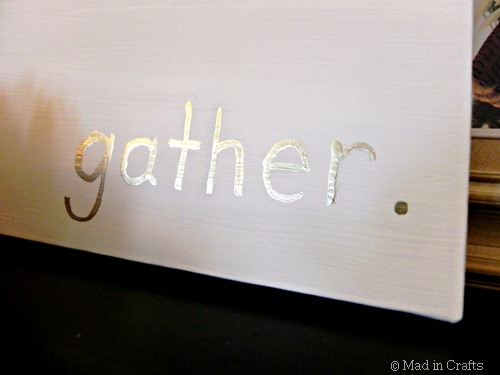 After seeing this cute Thanksgiving Gather Plate from A Little Tipsy, I was inspired to paint the canvas that came in the frame.  I simply covered the canvas in white craft paint and then hand painted the letters using more of the liquid gilding. 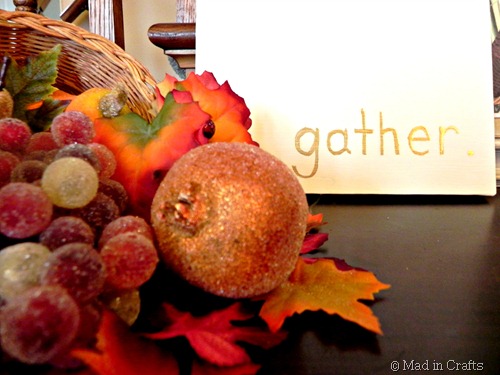 I also used some fake fruits and veg to fill up my thrifted cornucopia. 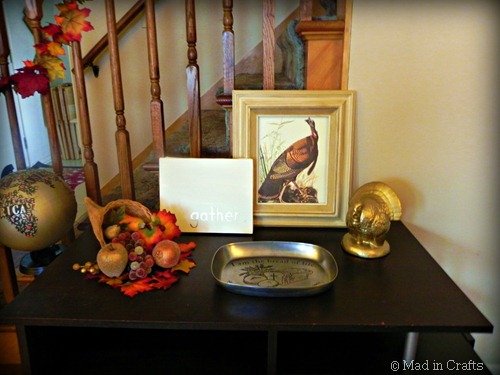 I didn’t go overboard with the Thanksgiving décor because our house was already in full-on Fall mode from my daughter’s Pumpkin Party.  I do like the daily reminder to be thankful for all the blessings God has given to my family.