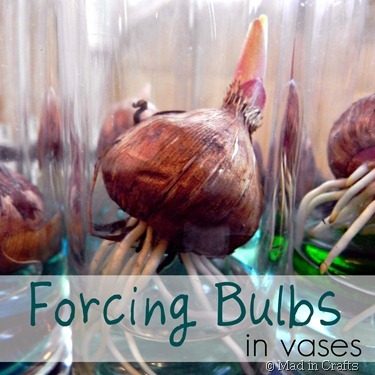 I love Spring flowers: hyacinths, daffodils, and especially tulips!  With the crazy weather we get in Michigan (ex: last week it was almost 90, yesterday morning there was frost on the ground), it’s hard to predict when we will actually see those flowers.  It is possible to get an early start on Spring by forcing flowering branches or bulbs indoors.
So I decided to try forcing gladiolus.  And if Forcing Gladiolus isn’t already the name of a chick rock band, that’s a crime.
You can repeat this process with any bulb flower you have on hand.  I let my preschooler help me too, and we talked about the similarities and differences between the bulb and the bean seed we germinated last year. 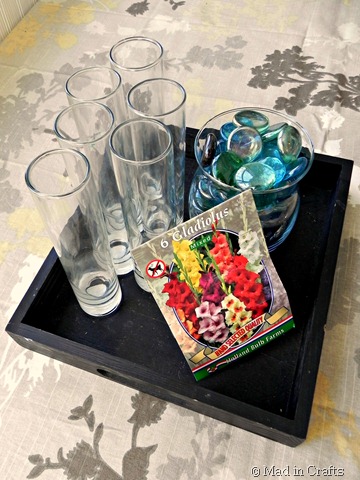 To force gladiolus, you will need:
as many vases as you have bulbs
stone vase filler
gladiolus bulbs
water
a sunny window
All the materials for this project can be bought at the dollar store, even the bulbs.  They aren’t available year-round, but as long as they have Spring items in stock, you should be able to find them. 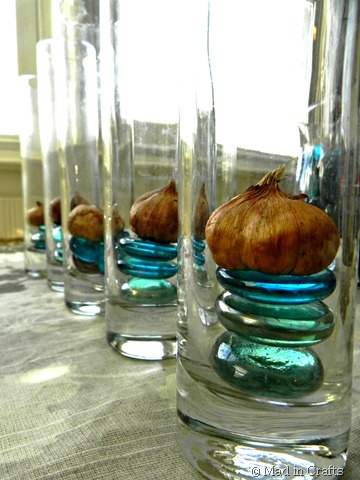 Begin by stacking a few rocks in the bottom of the vases.  I chose to use bud vases and glass rocks for a sleek look.  Place one bulb on top of the rocks in each vase.  BE SURE THE POINTED END IS FACING UP. 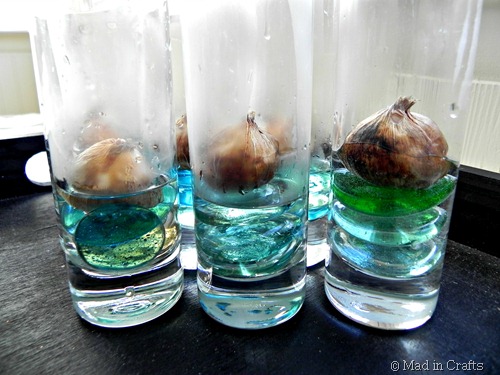 Pour a SMALL amount of warm water into each vase.  You want the water level to just barely touch the bottom of the bulb.  If too much of the bulb is submerged in the water, it may start to rot.

Place the vases in a window that gets good exposure to sunlight. 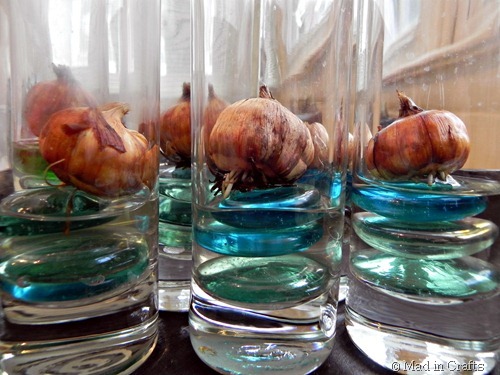 After just two days some of the bulbs began sending out roots. 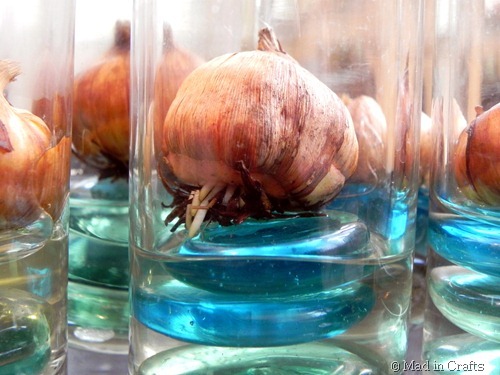 It was fun for my son and me to see the alien-looking tentacles reach down to the water.  He had already learned a bit about the parts of plants in preschool, so he knew that the roots acted like little straws to bring the water up to the plant inside of the bulb. 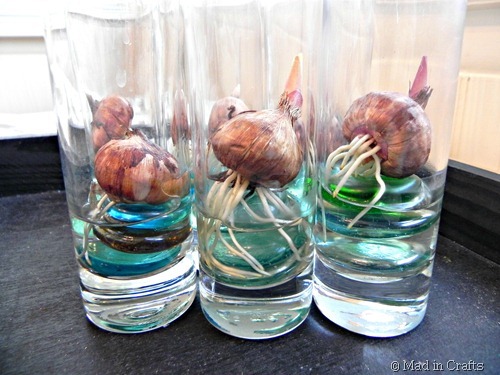 After a week, all of the bulbs had sent down roots, and some were beginning to sprout.  The bulbs went a little wonky as the roots worked around the rocks, but the narrow cylinder of the bud vase didn’t allow them to fall completely sideways. 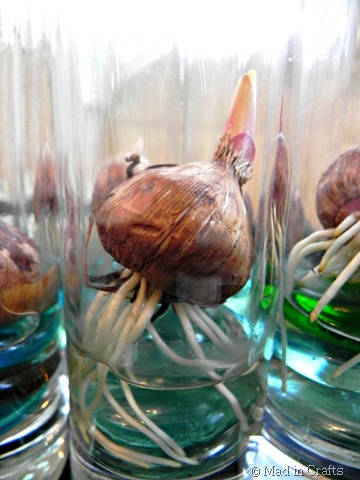 As the roots take up the water, you will need to add tiny amounts of water back into the vase.  Again, you don’t want to submerge the bulb in water or it might rot or mildew. 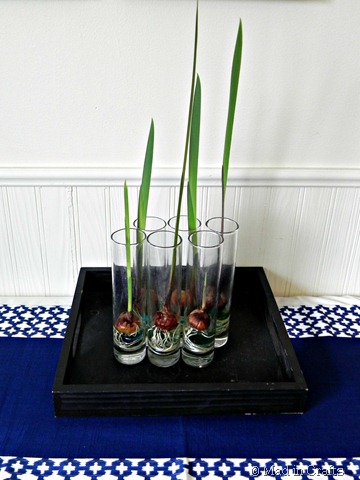 After three weeks, the bulbs sent up tall shoots that reached way beyond the mouths of the vases.  Even the one little underachiever bulb that I thought might be a dud, eventually started growing!

I think a tray of forced bulbs would make a pretty centerpiece for Easter or for a bridal or baby shower.  In those cases, I would use tulip or daffodil bulbs as it takes less time for them to bud and flower.
Since gladiolus get REALLY tall before flowering, I won’t be able to leave them in these vases if we want to see them bloom.  More on that in another post….
Did you like this post?  Think it’s worth sharing?  Please share with your friends using the social media share buttons on the toolbar at the bottom of the page!
Thanks,  Jessica Hill