Scroll down for information on my first GIVEAWAY!!!
When I saw my local Dollar Tree had packages of cinnamon sticks, I snapped them up.  I wasn’t sure what I was going to do with them, but cinnamon sticks are usually ex-pen-sive so I got them while they were available.  The first thing I decided to do with some of the sticks was to make some easy stove-top potpourri.
To make stove-top potpourri, you will need:
a small pot
cinnamon sticks
water
an assortment of other good smelling spices, fruits, etc. 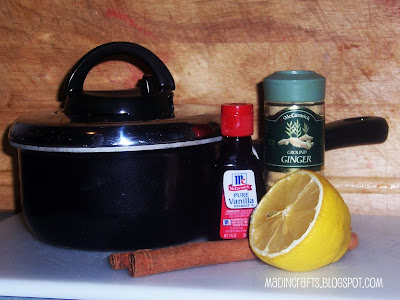 I used the cinnamon sticks, ground ginger, vanilla extract, and a half of a lemon that was sitting in my fridge.  With the exception of the lemon, these are all things you can usually get at the dollar store.  Break the sticks, slice up the lemon, and put everything in the pan.  Cover with water. 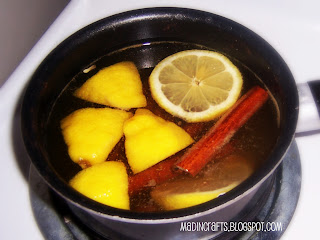 BE SAFE!
1.  Keep the pot over LOW, LOW heat.
2.  Check the water level every once and a while.  The water will evaporate, and the stuff in the pot will burn if you don’t replace it.
3.  Turn the burner off when you leave the house.
4.  Do not use while in the bath or sleeping.  (Nothing to do with this, they are just my favorite warnings on curling irons.) 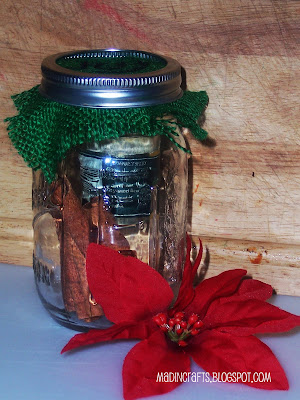 You can also turn this idea into an easy Christmas present.  Put a few cinnamon sticks and some spices into a jar.  Throw a little holiday material over the jar lid. Pair the jar with an electric candle warmer and include instructions saying to fill the jar with water and place on the candle warmer.  It works just as well as putting the potpourri on the stove, but can be done anywhere.  This would be a great gift for a teacher, especially a 5th or 6th grade teacher.  Kids that age are fun, but they can be SMELLY!!!