Wanna know a secret?  A good portion of the magic of a Pottery Barn catalog is in the staging.  The products themselves are kinda cool, but it’s when several of the products are put together in a well-lit vignette (I’m and poet, and don’t I know it!) that they really pop.  Part of that staging comes from elements that the untrained eye probably just passes right over.
And, guess what?  There is no need to pay an arm and a leg for home decor that most people won’t notice.  In fact, you won’t even have to pay a pinky toe for it because you can buy it all at the dollar store! 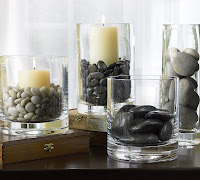 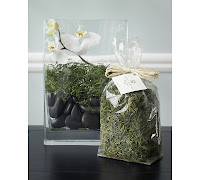 PB is selling these two items as “vase filler” which basically means “stuff to shove around your candles and flower arrangements to look like you know what you are doing.”  The River Rock and Spanish Moss vase fillers sell for $12 and $10 respectively. 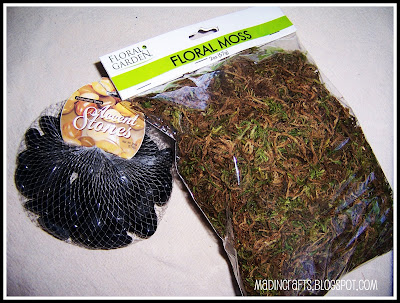 This stuff sells for a buck apiece.  To be fair, you do get 4 lbs. of river rocks from PB compared to 20 oz. from DT, and I don’t think the DT Spanish Moss can claim to be hand-picked from Scarlett O’Hara’s favorite 200-year-old tree on the property of Tara (or whatever crazy claim PB makes).  For our purposes, the cheap stuff works just fine.
Remember the Sugared Easter Eggs and Distressed Terra Cotta Pot from part 1 of this series?  Here’s an easy way to put them together to make a simple Easter centerpiece. 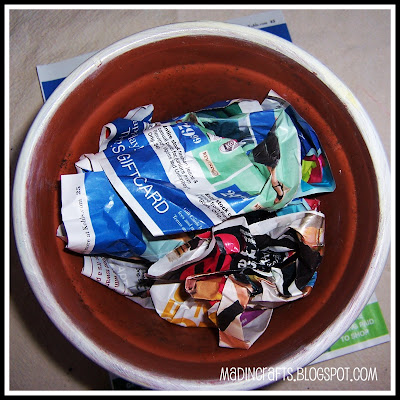 First, it’s a good idea to stuff about 3/4 of the pot full of crumpled magazines or newpaper.  The reason for this is twofold (just as the reason Chandler was in the box was threefold): 1) There’s a big hole in the bottom of the pot and stuff falls out of holes; and 2) Old, crumpled magazines are even cheaper than stuff from the dollar store.  Make a mental note that Kohl’s is having a 50% off sale. Then again. When ISN’T Kohl’s having a sale? 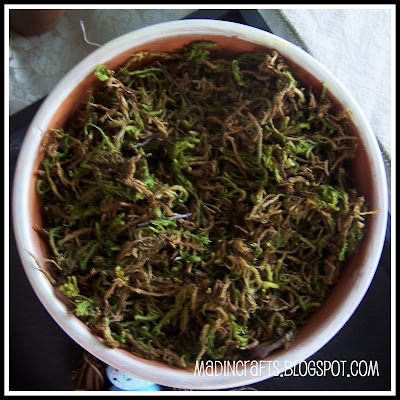 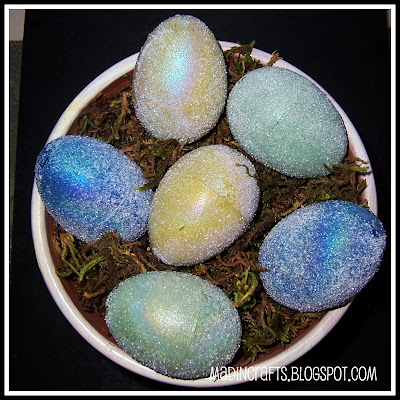 Tuck your sugared eggs into the moss.  Add a little more moss in between the eggs so they look like they are nestled in there. 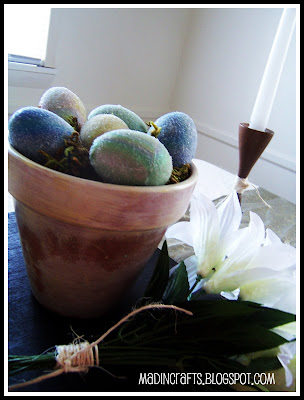 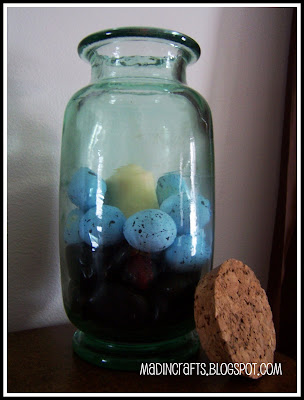 I found this great jar at Goodwill for a few dollars, and later realized Pottery Barn was selling similar jars for over a hundred dollars!  Yikes.  I put some river rocks at the bottom of the jar, topped them with the speckled robin’s eggs from part 2’s tutorial, and plopped in a candle.  Easy as eating pie.  Which is WAY easier than making pie. 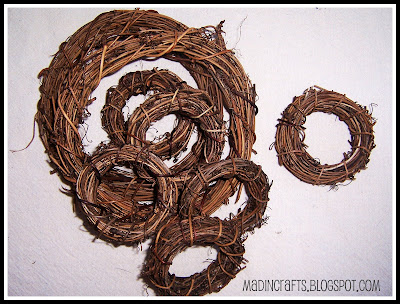 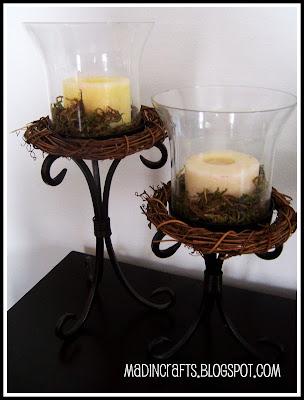 I placed the larger sized wreaths around these candle holders (that I decorated for my Dollar Barn Christmas post too).  I added some floral moss and place the candles back in.  They look a bit like bird’s nests, don’t they? 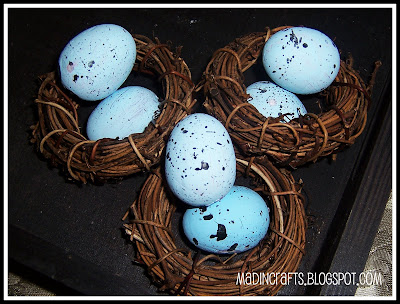 Not quite as much as these guys though!  I just put a few speckled robin’s eggs in three of the small grapevine wreaths and made nests.  Are you noticing my bird theme here?  You will see more of that in part 4 of the series.
Granted, these aren’t WOW-factor home decorations like a giant roulette-wheel on the wall, but all the little touches add up to a purposeful look that you always find in a PB catalog.  And when you can polish up your decor for just a few bucks, why not?
A Dollar Barn Easter money saved
running total:  $87
Check back again soon! There are two more installments of A Dollar Barn Easter yet to come.
Posted at The Shabby Chic Cottage, Tales from Bloggeritaville, and Somewhat Simple.