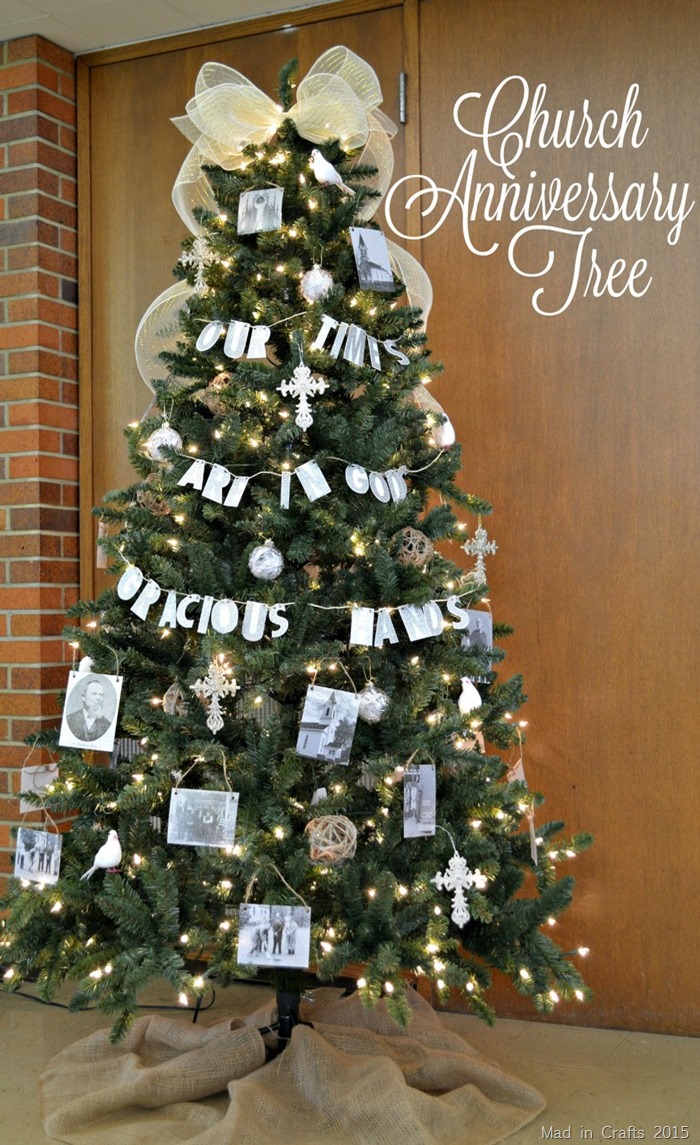 When I was asked by Christmas Tree Market to participate in another year of Christmas in the Community, I was happy to say yes.  Last year I was able to decorate a Names of Christ themed Christmas tree for my son’s parochial school.  This year I chose to decorate a tree for my parents’ church, since the church is celebrating a milestone anniversary.

This was my first time ever setting up a pre-lit tree, so I recorded the process to show you how easy it is.  Obviously I sped up the process for this video, but in real time I only spent 20 minutes setting the whole thing up.  Now that I know how to do everything, the process will go even more quickly next year. 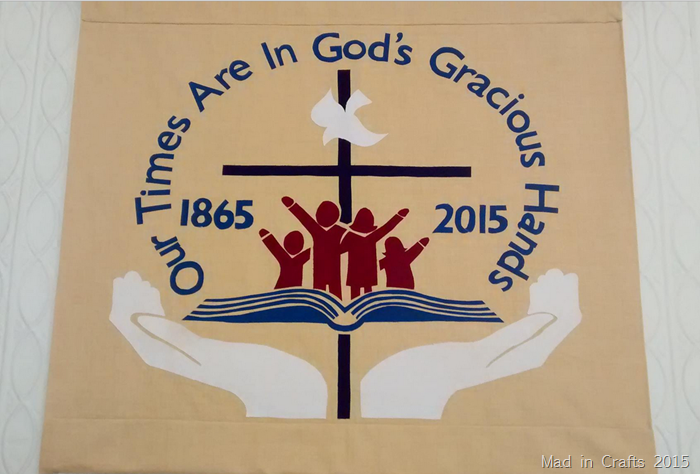 The church where my father serves as pastor is celebrating its 150th anniversary this year.  I helped to make this church banner earlier this year.  Props to all the ladies who make church banners on the regular; it is hard work!  I wanted the tree to work with their anniversary theme and to use elements of the banner as ornaments on the tree. 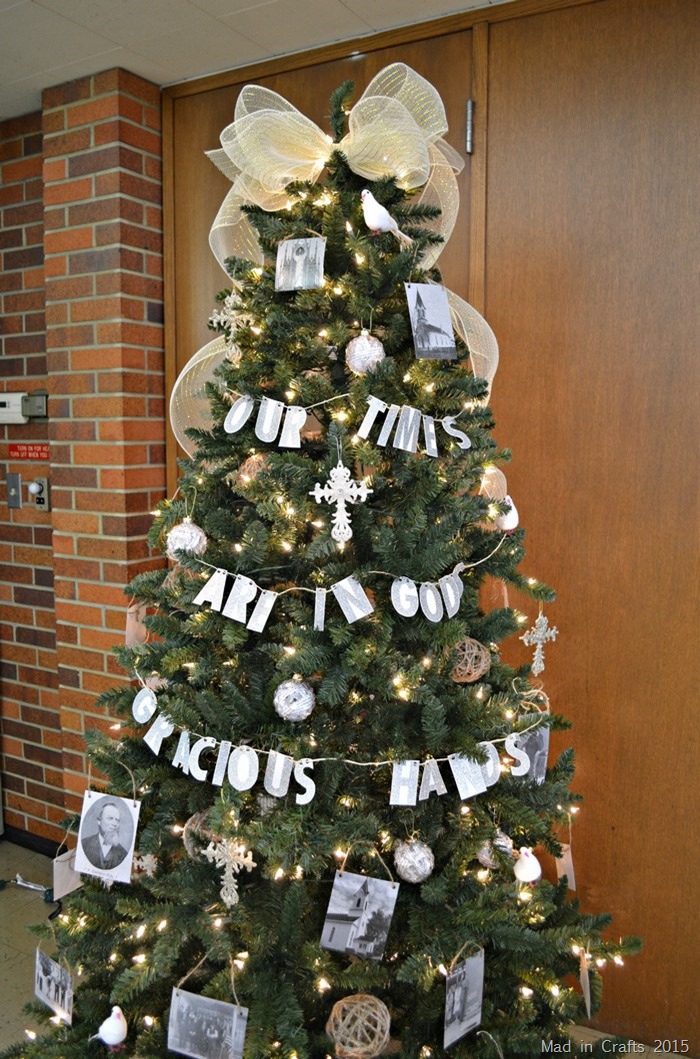 The first step was figuring out how to incorporate the anniversary theme, “Our Times are in God’s Gracious Hands,” onto the tree.  I found Pinterest photos of several trees where the decorators had turned chipboard letters into pretty word garlands, so I decided to go that route. 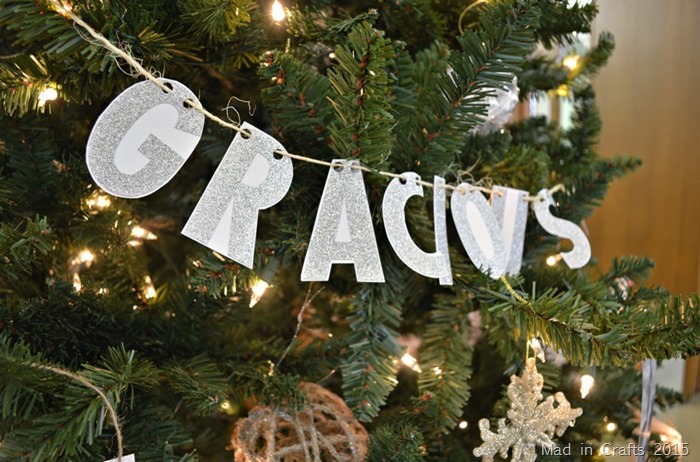 Initially, I was going to cut the words out of glitter cardstock using my cutting machine, but that machine and I are sort of frenemies and I couldn’t get it to cut properly.  My plan B was to buy glitter alphabet stickers and apply them to white cardstock.  Then I used my precision scissors to cut around the letters and a hole punch to create holes through which I could thread the twine.  I chose to not cut out all the negative spaces so that the letters would be a bit sturdier. 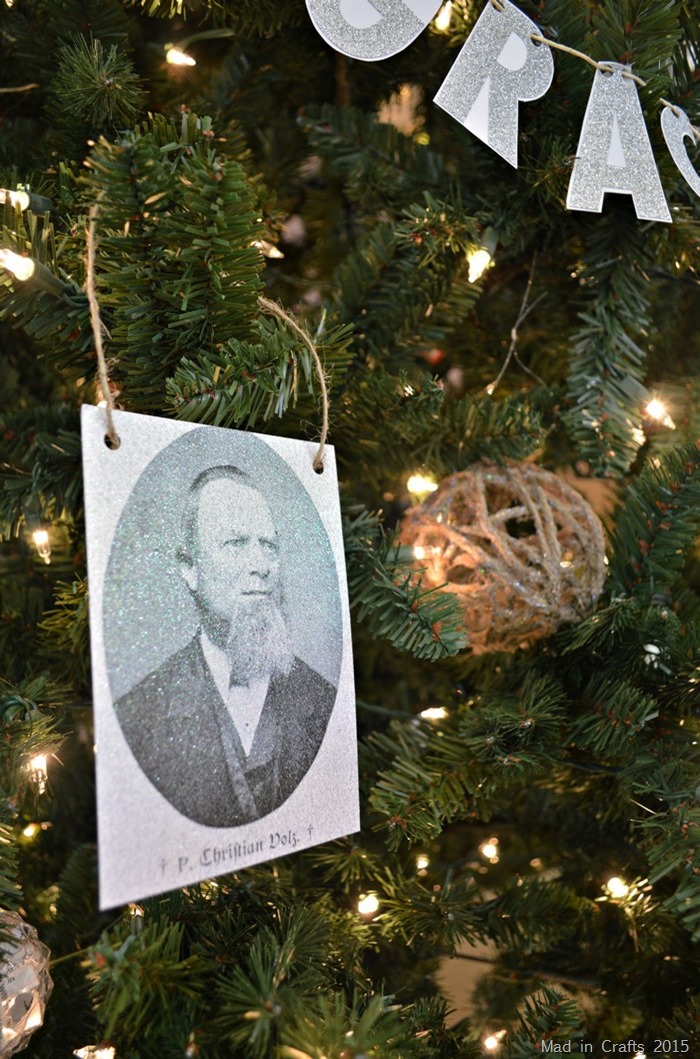 To represent the people on the banner, I asked my dad to make up a thumb drive full of photos of the church’s history.  I then made those photos into glittery ornaments using Glitter Prints paper. 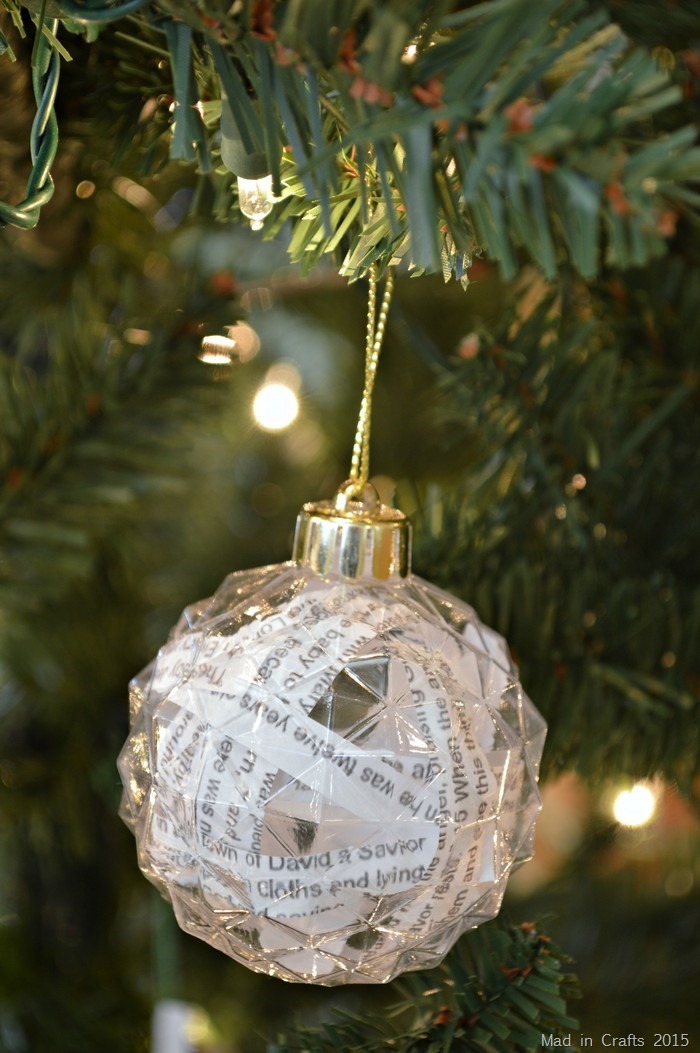 The foundation of the banner is God’s Word, so I knew I wanted to include Bible passage ornaments on the tree.  I found these clear, faceted ornaments at Dollar Tree.  They had red and green tinsel stuffed inside, but I spent a little time with tweezers to empty them out.  I printed Luke 2 onto printer paper, cut the paper into small strips, and placed those strips inside the emptied ornaments. 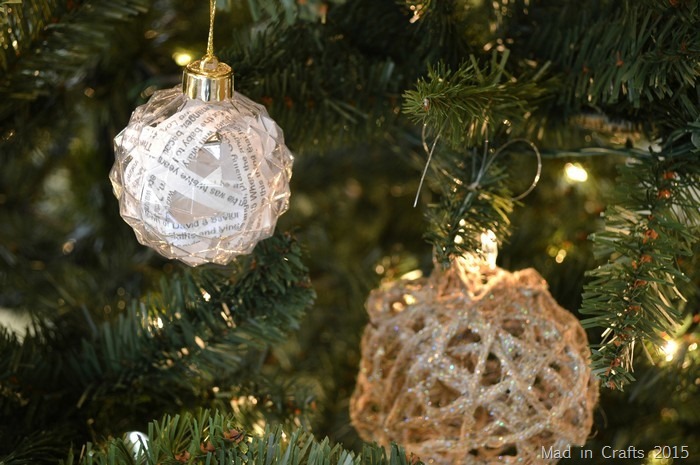 The pattern of the overlapping Bible verses inside inside of the clear ornaments is repeated by the glitter twine ornaments, 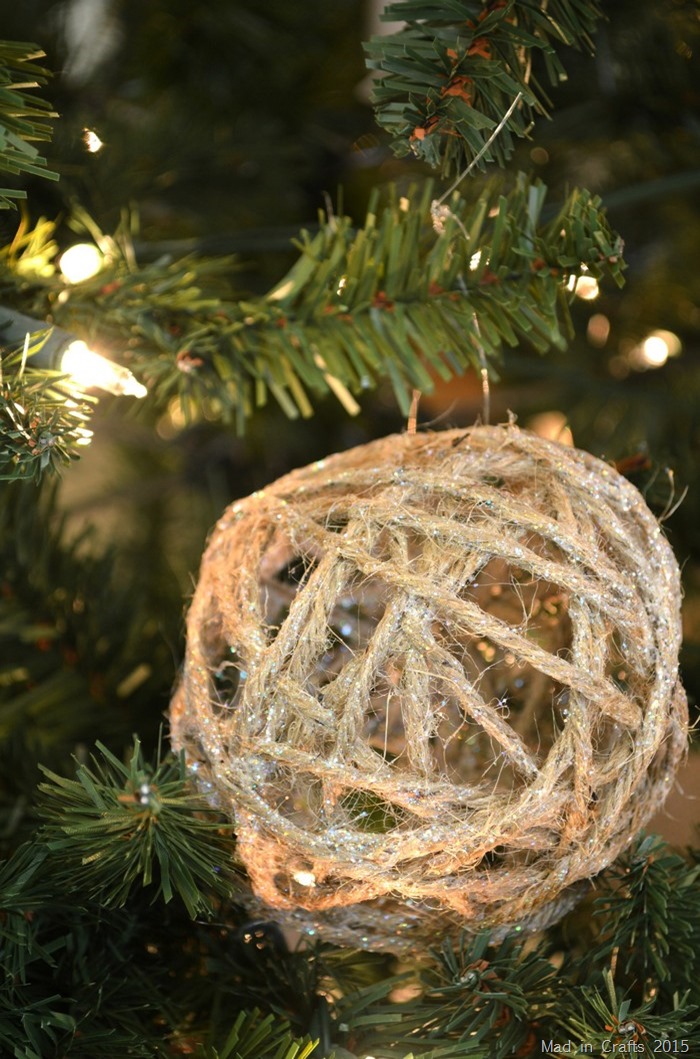 These are your standard twine ornaments made by wrapping twine around balloons and dipping them in extreme glitter Mod Podge.  Although they aren’t representative of anything on the anniversary banner, they added texture and repetition of shape to the tree. 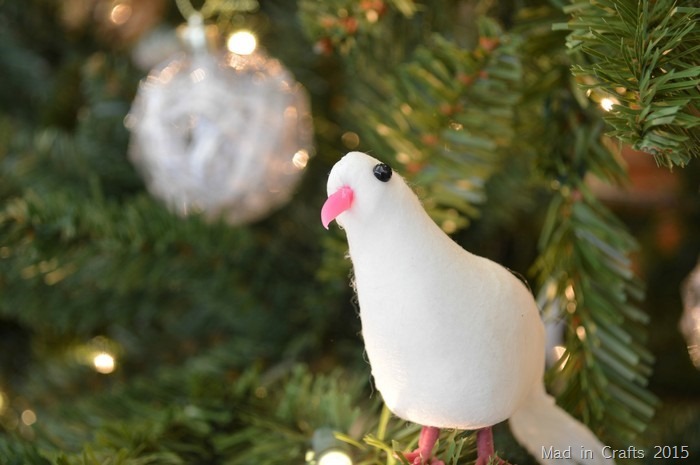 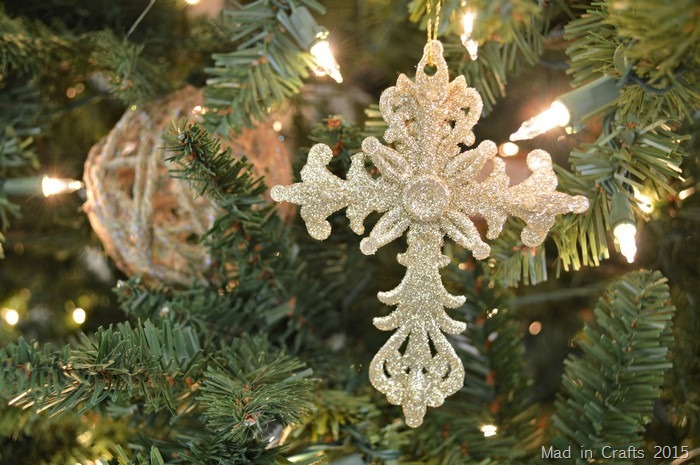 I found dove and cross ornaments at Dollar Tree as well, and they pull more elements from the banner design. 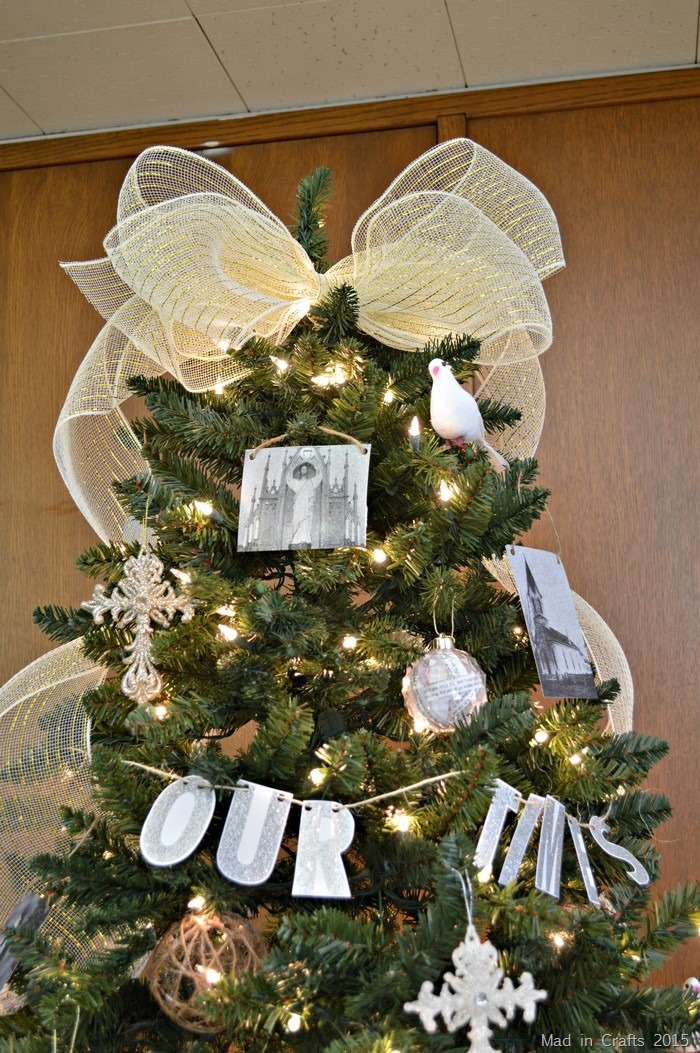 Finally I finished the tree off with a bow made of decorator mesh and a tree skirt made from burlap.

Here is the entire decorating process all GIFed out. 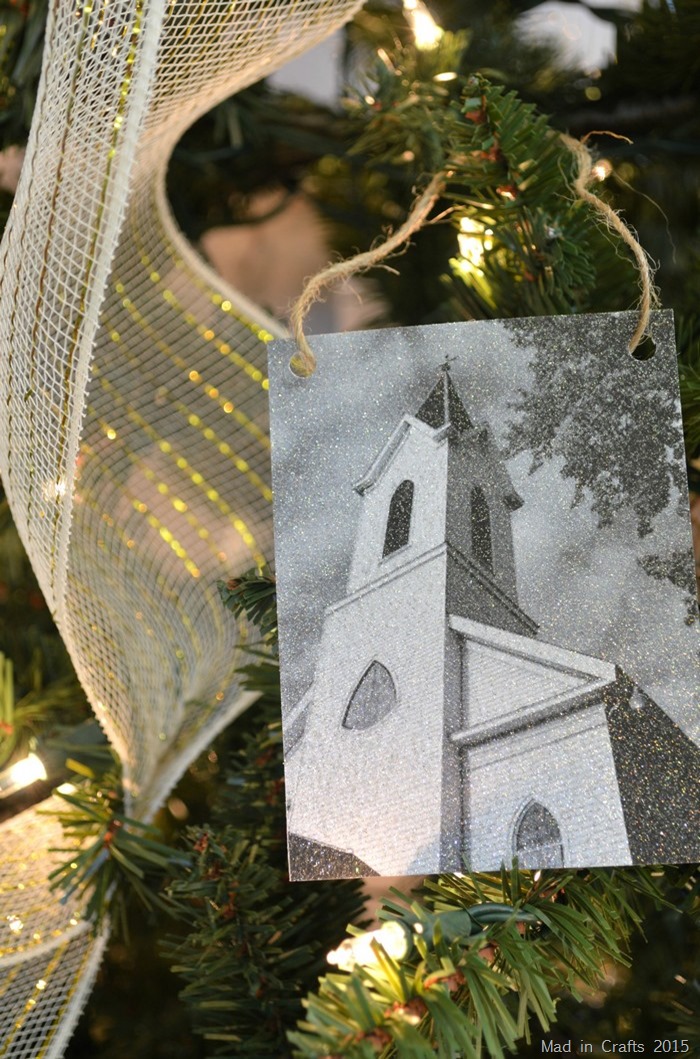 I hope the members of the congregation enjoy the tree during their celebration of thanksgiving for 150 years of God’s grace later this month!

I am including links to the various elements I used on the tree, so you can make them at home.  Some of these are affiliate links.  By clicking and purchasing, you are helping to support Mad in Crafts.  Thank you!