We did a baseball theme for my son’s 2nd birthday this year.  There is an abundance of great ideas on the internets for baseball parties, and food and decorations are both easy and cheap to pull off.
I created a quick Evite invitation and in it I asked the guests to wear baseball gear if they had it.  Most of the guests wore shirts and hats from their favorite teams.  I did warn them ahead of time that if anybody showed up wearing Yankees gear, I wouldn’t let them in.  If you think I’m joking, you don’t know me.

For the food we served stuff traditionally found at a ball game or as it is less-commonly referred to: “Food that used to be considered a choking hazard, but now you are allowed to eat because YOU’RE TWO!”

(Notice my compulsive use of bullet points.  Organized lists make me happy.) 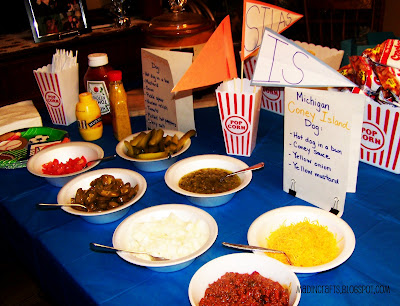 I put up little signs with the ingredients for Chicago-style hot dogs and Michigan Coney Island dogs in case people wanted an authentic experience.  I picked up the plastic popcorn buckets at the Dollar Tree this summer.  Since they are reusable, I think I will have to have a movie night sometime soon! 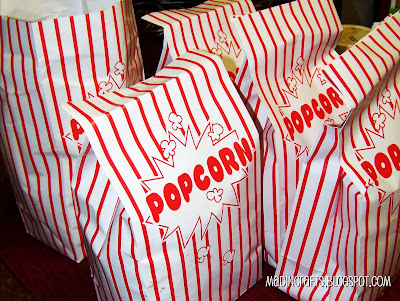 I bought these popcorn bags at the Dollar Tree too.  We had them sitting on the table so when the guests arrived, they could grab a bag of popcorn to munch on while they waited for the food to be ready. 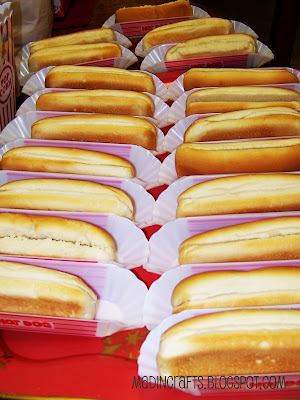 My mom found these hot dog holders for super cheap online at the same site where she got the plates and napkins.  For the price, we thought they were going to be paper, but they turned out to be plastic so hopefully we will get another chance to use them someday. 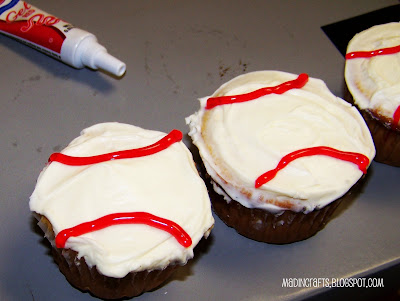 The cupcakes were just basic white cupcakes with laces iced on to make them look like baseballs.  They looked pretty good on the cupcake tower. 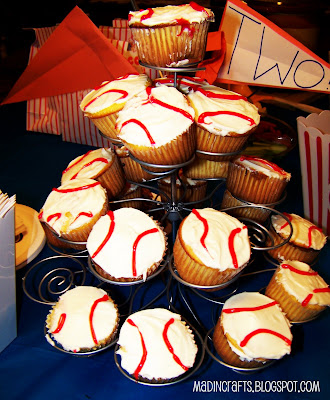 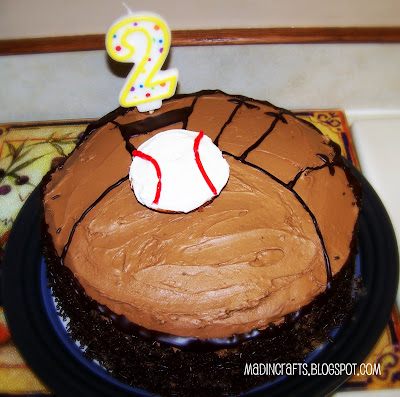 .ugh.
The cake was a trial.
It’s just a boxed mix that I made into a layer cake and decorated according to the instructions here.  I did one layer of frosting but got all kinds of crumbs all over the frosting.  I decided I would just be like a professional cake decorator and call that my dirty icing layer and put another on top.  Well, by the time I got to doing to the second layer, the first one had hardened so it cracked and pulled up while I was frosting it.  When all was said and done, I used two and half containers of frosting on the cake.  Just doing my part to keep local dentists and fitness centers in business.
I did my best to cover the wonky sides with sprinkles, and made a ginormous mess in the process.    I very carefully iced the mitt details on the top of the cake and then stepped back to admire my work….  I had only put 3 fingers on the glove.  Criminee.  I added another finger, but it looks like this particular outfielder has gigantism of the ring and pinky fingers.  Good thing my son is two and would never notice.
That being said, everybody raved about the cake and said it was delicious.  And that’s what counts, I guess.
We had a great time, but I am bushed after all the running around yesterday.  I would love to just stay in my jammies all day, but the nice men are bringing me a new dryer soon and I don’t want the sight of me in yoga pants to frighten them away.