I started looking for ideas for my son’s party almost a year ago.  I didn’t start that early because I’m super organized, don’t worry.  It’s not often you get to do an all-out theme party without people thinking you’re a weirdo, so I get super excited when I get the chance.
While I was surfing around for ideas, I came across this great idea on Filth Wizardry (a wonderful site BTW).  I used that idea for a non-violent pinata crossed with this tutorial from the Disney FamilyFun site as the basis for the baseball pinata at the party. 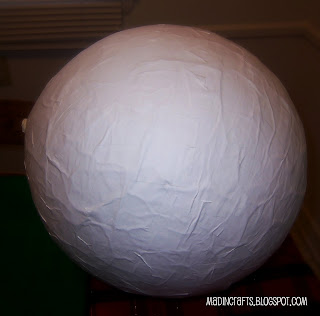 I used a big punch balloon from the dollar store as the form for the pinata, and did three layers of papier mache with newspaper and two of printer paper to cover it.  I had never done papier mache before and found that it’s really easy but messy.  I had to wait until Boy-o went to sleep each night to put the next layer of paper on the pinata, so I was up until 12 some nights.  (Ah, I remember the days of my youth when 12 was still “early” in the evening!)  I refrigerated the papier mache goo each night when I was done, and the recipe made enough for the whole pinata. 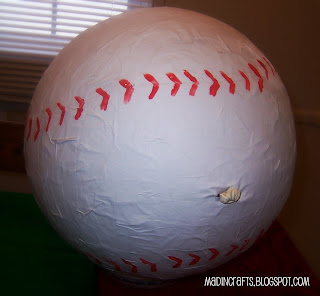 I wanted the pinata to look like a baseball so I drew some rough guidelines for the seams on the pinata with a pencil, and painted on the stitches in red.  Then pop the balloon and let the air slowly leak out. 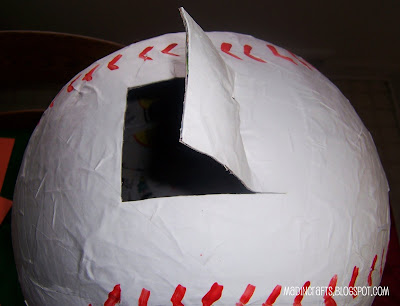 Use a craft knife to cut a flap in the pinata around where the knot of the balloon was sticking out.  Make sure that the opening is large enough for all the goodies to spill out without getting stuck.  Don’t worry about the hole caused by the knot, you will use that later. 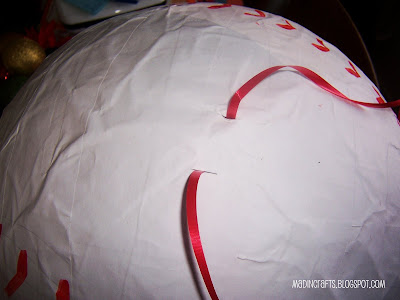 Cut two small slits at the opposite end of the pinata.  Thread a length of ribbon or string through the slits, and tie off inside the pinata.  This is your hanging loop. 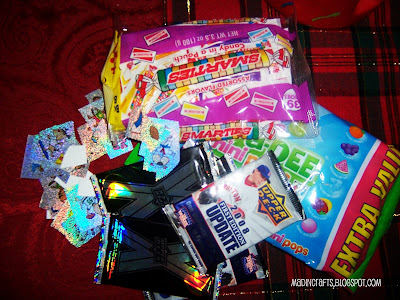 Fill the pinata with treats.  I filled this one with die-cut sports stickers, packs of baseball cards, suckers and Smarties.  All from the dollar store.
If you haven’t ever seen a pull-string pinata before, the idea is instead of blindly whacking the pinata with a stick, the kids pull strings attached to the inside of the pinata.  Only one string is the “winning” string which will open the flap, releasing the treats.  It’s a great alternative if your party is indoors or if you have little guys running around. 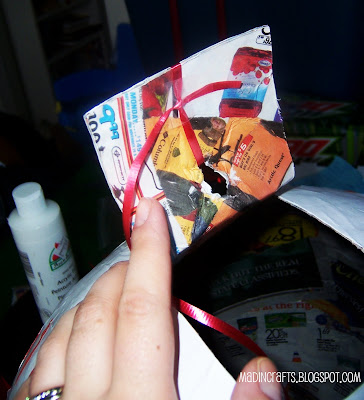 Tie a long length of curling ribbon around the flap through the hole from the balloon knot.  This is the “winning” string for the pinata. 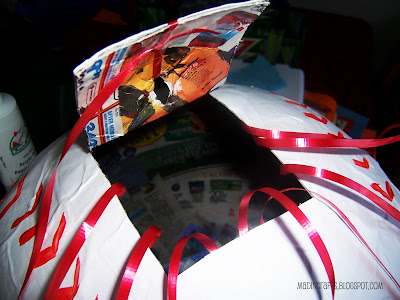 Loosely tape several other decoy ribbons to the inside of the pinata.  They should slip right out of the pinata when pulled. 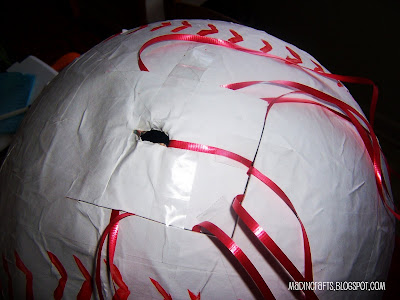 Close the pinata flap and tape it closed well.  Hopefully you have disguised the winning string well enough.  Bet you can’t tell which one it is, can you? 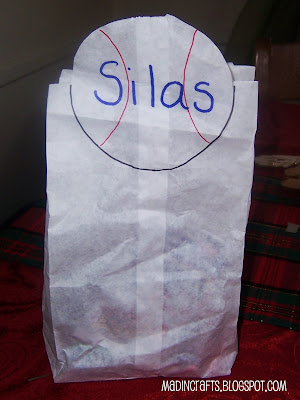 I made treat bags for the kids who were at the party so they had a place to store all the goodies.  I just used plain white paper sacks, and traced a big coffee cup to make the shape of a baseball.  I cut around the ball and added stitches and the child’s name to each bag.  I put one pack of baseball cards in each bag so that each kid was sure to get some even if they didn’t grab any from the pinata.  This bag looks a little worse for wear, since I took the picture after the party!
I wish I could tell you whether or not the pull-string pinata totally works!  When we did the pinata at the party, the two other little boys at the party grabbed a few decoy strings and pulled them right out of the pinata just like was supposed to happen.  My very practical son watched for a little while and then walked up, stuck his little fingers in, and yanked the pinata flap right open!  Always looking for the shortest route between himself and candy.  That’s my boy!!!