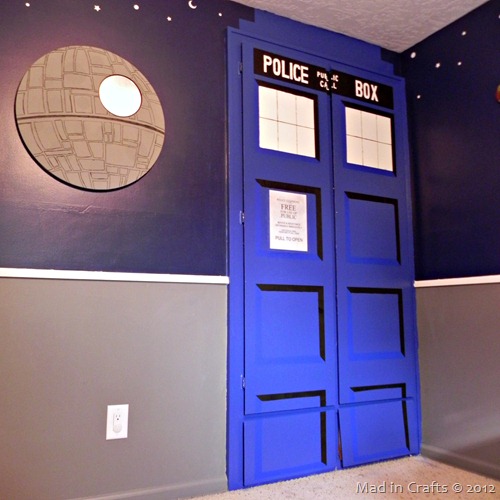 I like to say I am a geek by marriage.  When I graduated from college, I still hadn’t seen any of the Star Wars movies all the way through.  I wouldn’t have been able to tell General Grievous from Senator Palpatine if my life depended on it.
But while I was in college I began dating my future husband, a BIG Star Wars fan, and via relationship osmosis, I absorbed some of his Star Wars knowledge.  When we began teaching in South Dakota, we would pass the long car trips home for vacation by listening to Star Wars books on CD.  I beat my first Xbox game (Star Wars: Knights of the Old Republic).  I went to my first midnight premiere (Star Wars: Episode III).
I was becoming a geek.
Years later, after our son was born, it became evident that I would have to become an even bigger geek to keep up with his interests.  At two, he was a Doctor Who fan.  At three, he was obsessed with Buzz Lightyear.  This year, he has mastered Lego Star Wars on the Xbox.
So… he needed a room to match his geekitude.  And this geeky momma provided it. 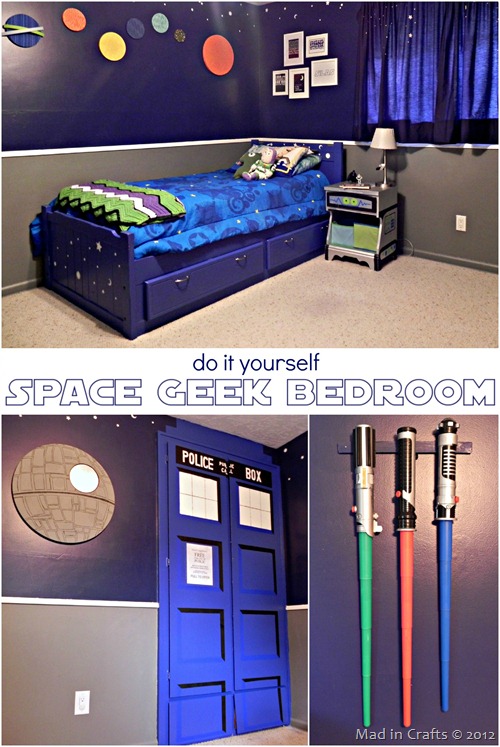 Using his original Space-Themed bedroom décor as a base, I added in elements from Toy Story, Doctor Who, and Star Wars to give him the geekiest room I could DIY. 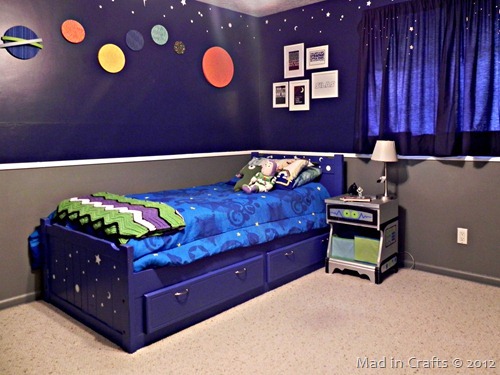 When we moved in to The Mad House, the bottom half of these walls were covered in green wallpaper (which covered ANOTHER layer of painted-over wallpaper) and there was a tractor-themed border above the chair rail.  That all went away.
I was a little hesitant that the navy and grey paint would make the room too dark, but I absolutely love the way it turned out.  And down the line, we can remove the space stuff and it will turn into a simple, masculine room.  If you would like more information on the exact paint we used, check out this post.
My son’s Big Boy Bed is still decked out in Toy Story bedding.  My mother-in-law made him a kid-sized afghan in Buzz Lightyear’s purple, green, black and white. 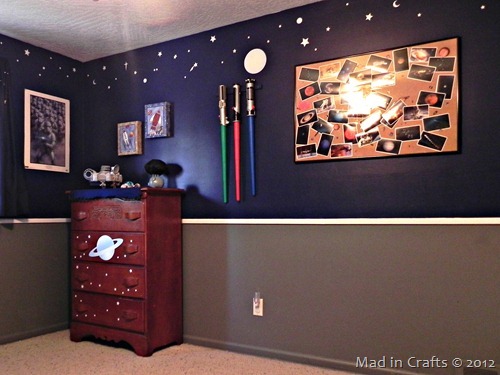 Most of the wall décor in the room was gifted, thrifted or DIY’d. My son’s godmother found him the super cool Storm Troopers poster at a Scholastic book fair. I found the rocket canvasses at a garage sale for 75 cents apiece!  I put together the Easy Space Room Décor frame using a pack of flashcards from the Target dollar spot. 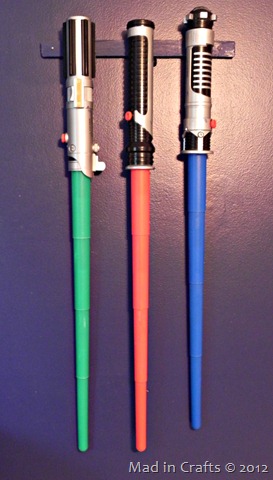 We actually had these lightsabers before my son was born!  My husband and I organized a Star Wars party for a church children’s group when we were first married, and we bought these way back then. They have been sitting in a drawer for 5 years and now are out in the open again!
I just painted a stir stick with the wall color and nailed it to the wall.  The lightsabers all have belt clips, so they can be hung on the strip and easily taken off again. 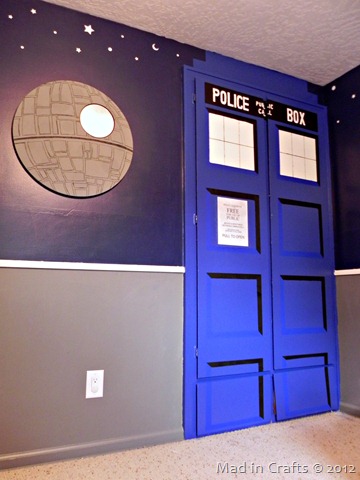 Later this week, I will share the tutorials for turning my son’s closet into the TARDIS and for how I created a Death Star from a mirror from his nursery. 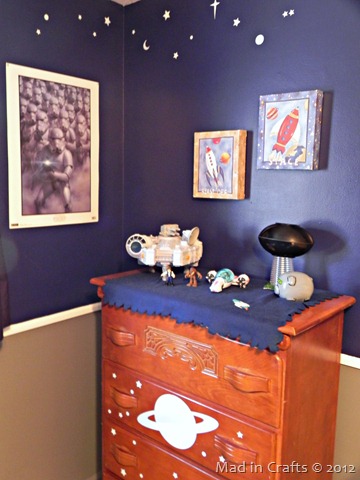 On my son’s dresser are his Star Wars toys: the Millenium Falcon, complete with Chewie and Han, and Obi-Wan’s freeco bike.  My son loves to find coins and put them in his Robo-Pig Bank, a dollar store find that I painted to match his room.
The black thing behind the piggy bank is my version of Heather’s (from Dollar Store Crafts) Alien Abduction Lamp.  Mine looks a bit more like the Vince Lombardi trophy than a spaceship, but in my defense it was an early craft attempt. 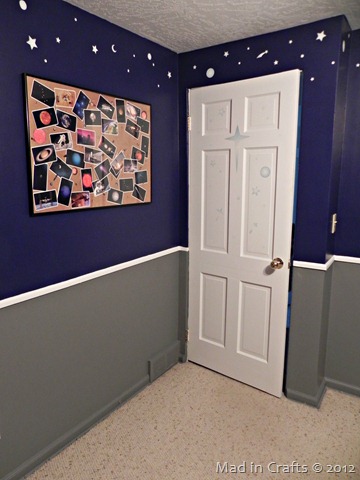 The stars you see all around the top of the walls and on the door and furniture are removable glow-in-the-dark stickers I bought from Walmart when we moved to Michigan 3 years ago.  They have survived two moves and are still sticking like new! 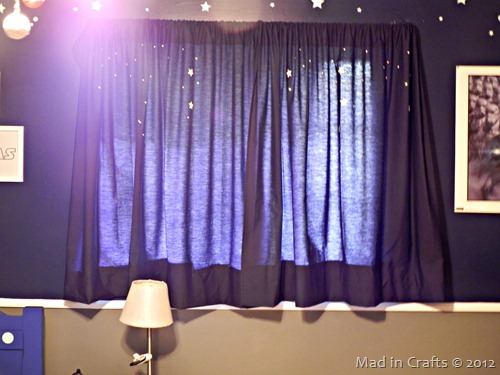 These are the same No-Sew Space Curtains I made for my son’s room two houses ago.  I adjusted the length with my trusty Stitch Witchery and they work very well in the room. 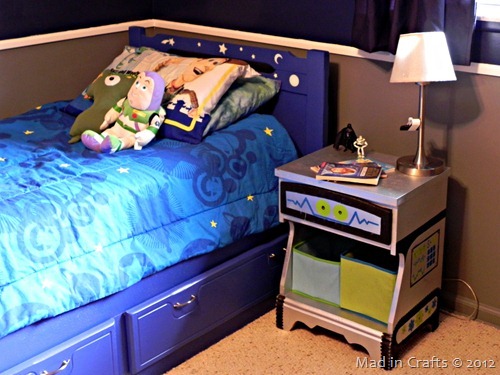 The S-Bot 2007 nightstand thankfully no longer holds diapers, but has moved onto giving me a place to keep the books I read my son at night.  We have already read through a few Star Wars books and have now moved on to Doctor Doolittle!  The Quick Space Lamp Redo has lasted through all the moves as well, and gives us just enough light to read together. 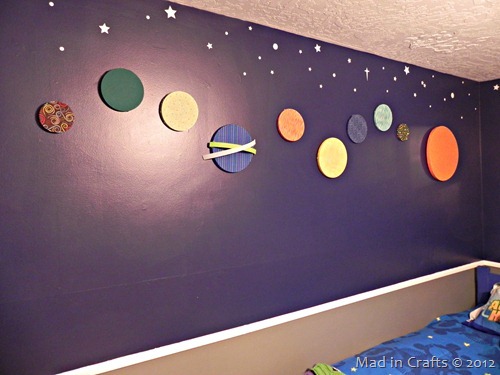 The Embroidery Hoop Solar System that started the whole space themed room takes up one big wall in my son’s room, adding some bright colors in to the space. 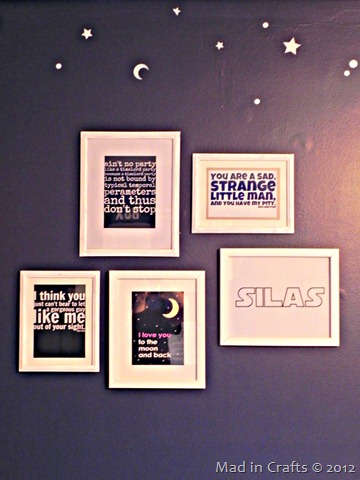 I put together a frame collages of quotes related to Toy Story, Doctor Who, and Star Wars.  Later this week, I will share the easy process, and how you can print off copies of your own. 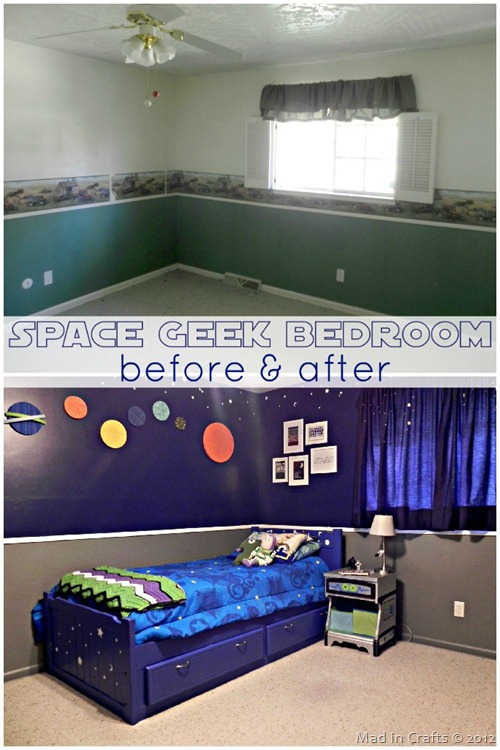 Is the room nerdy enough?  Have I earned full-fledged geek status now?
To check out all the other projects in my son’s space themed bedroom, click on any of the thumbnails below.