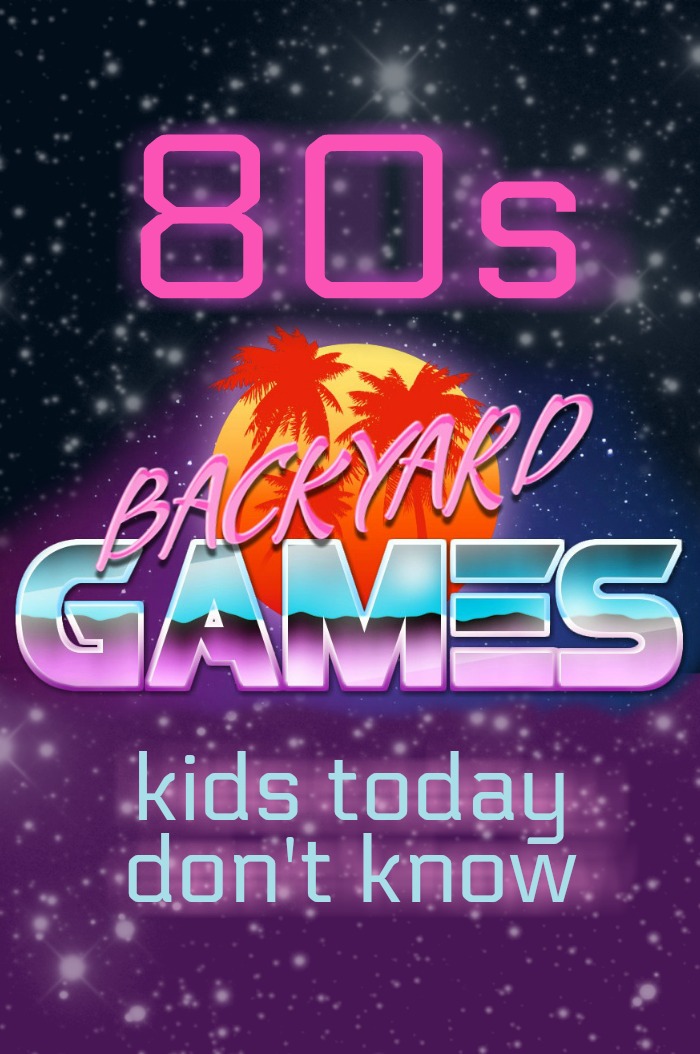 First of all, let me say that making that Pinterest graphic was the most fun I’ve had in a while.  Golly, the 80s were ugly/amazing.  I grew up in the 80s in a typical suburban neighborhood.  The houses all had chain link fences, but all the fences had gates so you could get into each other’s yard.  All the neighborhood kids would just kind of roam from yard to yard playing backyard games like Tag or SPUD all summer long.  Thankfully, my family still lives in this kind of a neighborhood now.  All the neighborhood kids play together in one yard or the other, but they never seem to be playing any actual backyard games.

I tried to explain to my kids the fun of playing Bloody Murder (which scandalized my daughter) and Chinese Jump Rope (who NAMED these games?!), but they hadn’t heard of either of them. They have a general idea of how to play Tag and Hide and Seek, but that was it.  Well, that just won’t do.  It occurred to me that we 80s kids haven’t been educating our own kids about the joys of backyard games.  And, yes, I am sure there are 70s and 90s parents out there who played some of the games too, I’m not trying to say we 80s kids invented them, so don’t get your undies in a bundle.

In case you need a refresher before passing this knowledge on to your kids, I wrote up the rules for some of the backyard games I remember most from my childhood.  If you played different games, or played these games with different rules, please chime in in the comments.  I’d love to hear all about it!

These are all affiliate links, if you make a purchase (of anything from these retailers, not just these items) after clicking through, I will earn a small commission. Ads and affiliate links are the way I am able to keep this website running and to offer you free tutorials all year long. Thank you so much for supporting me and Mad in Crafts!

Needed: 8 or more kids, a playground ball, and a large playing area

All players count off and must remember their assigned number.  Choose one player to be It for the first round.  All the players gather around him, and he throws the ball straight up in the air while calling out a number.  All players run away as fast as possible except the player whose number was called.  She must try to catch the ball, and when she does she yells, “SPUD!”  When Spud is called all players must freeze.  The player with the ball must try to hit another player with the ball, and she can take three giant steps to get closer to any player.  Younger players can take more steps, if needed.

Players can attempt to dodge the throw, but they may not move their feet.  If a player is hit with the throw, he gets an S (or P or U or D, if he already has letters).  If the player successfully dodges the throw, the thrower gets the letter.  The player who received the letter, whether thrower or dodger, gets to be It for the next round.  When a player has all four letters (S.P.U.D.), he is out.  The last player standing wins.

S.P.U.D. is a classic game that is even fun to play as adults.  For about ten minutes, then everybody is too winded to keep playing.

This is a game that the kids in my neighborhood played growing up, and it may or may not be an actual thing.  For each round, one player is picked to be the Buyer and one to be the Seller.  All other players are statues.  The Seller calls out “GO!” and all statues must spin and twirl and dance and make crazy gestures until the Seller calls out “Freeze!”  Then the Statues must freeze and hold that position.  The Seller then leads the Buyer through the showroom of “statues,” using his imagination to name and describe each Statue player.  The Seller then chooses one Statue to “buy.”  That player then becomes the Seller and is allowed to choose any other player to be the Buyer for the next round.

We had fun coming up with silly and hilarious descriptions for each “statue.”  Here you see a rare ballerina turtle in the middle of a tea party.  This is a toilet repairman eating a giant sandwich.

This is a great way to get younger kids to wear off some energy. One player is It for each round.  All the other players stand on the start line, while the player who is It stands 10 or more feet away, facing away from the other players.  When he yells,”Green Light!” players begin to run forward, but when he calls out “Red Light!” and turns around, players must freeze.  Any players caught advancing after Red Light has been called have to retreat back to the start line.  The player who is It repeats the Red Light, Green Light turning process until, one player gets close enough to touch the player who is It.  She is the winner and gets to be It for the next round.

Red Light, Green Light is a great game for tired adults to play with energetic kids.  You can park yourself in a shady spot, declare yourself All-Time It, and bark orders to make the kids run.

This is one of the few games on this list that requires a defined playing area.  Start by drawing a large (think 8’x8′) square on the sidewalk or driveway.  Divide that large square into four equal squares; marking them 1-4.  Each of the four players stands in one of these four squares and the point of the game is to stay in the #1 (or serving square) as long as possible.

The server begins by bouncing the ball in her own square and serving it into the #4 square.  That player must hit the ball so it bounces into another player’s square, and so on.  If a player commits an error (see below), she is bumped out of the game (in the case of more than four players) or to the #4 square.  The other players then all rotate up a square.

If you have more than 4 players, a new player rotates into the #4 spot when a player is eliminated.

This is a classic backyard game that you’ve likely played a hundred times.  Players are divided into two teams who line up facing each other, leaving at least ten feet between each line.  Players from each team hold hands, and choose one player from the other team to play that round.  The calling team chants, “Red Rover, Red Rover, let so-and-so come over!” and that player runs from the opposite line and tries to break through the line created by the calling team.

If you haven’t gotten an injury while playing a game of Red Rover, you haven’t had a real childhood.

This is the first of several problematically named games we 80s kids played. We should definitely not call it this anymore.

Two holders stand a few feet apart, a large elastic band around their legs.  The band makes a sort of rounded rectangle shape; this is the “jump rope.”  The jumper performs a choreographed series of jumps over the band.

The rhyme I used growing up was:

There were rumors of people advancing to neck level, but I think they had to be an urban legend.  No kid can beat Blindsies at waist-height.

GHOSTS IN THE GRAVEYARD/BLOODY MURDER

Needed: 4 or more kids, best in a neighborhood setting

Neither of these is a particularly PC name for kids’ backyard games, but it was the 80s so nobody cared.  First, you must establish home base; it can be a porch or a tree or a swing set, whatever.  Choose one player to be It.  She closes her eyes and begins to count slowly, “One o’clock.  Two o’clock.  Three o’clock….” all the way to midnight.  During this time, all the other players must run and find hiding places.  When the It player calls out “Midnight!” the rest of the players try to run for home base before It catches them.

Alternately, the It player is the one to hide, while all other players count to midnight.  Then the non-It players reluctantly search for the “murderer” until they find him.  The non-It player who finds him yells, “Bloody Murder!” and all non-It players run for home base.  If a player is caught, he must be It in the next round.

So there you go.  Seven perfectly good backyard games that your kids might not even know exist.  Teach them the rules to these games, and they have a summer of fun waiting for them.  And, maybe you can finally get some peace and quiet in the house!

More ways to keep your kids occupied this summer: